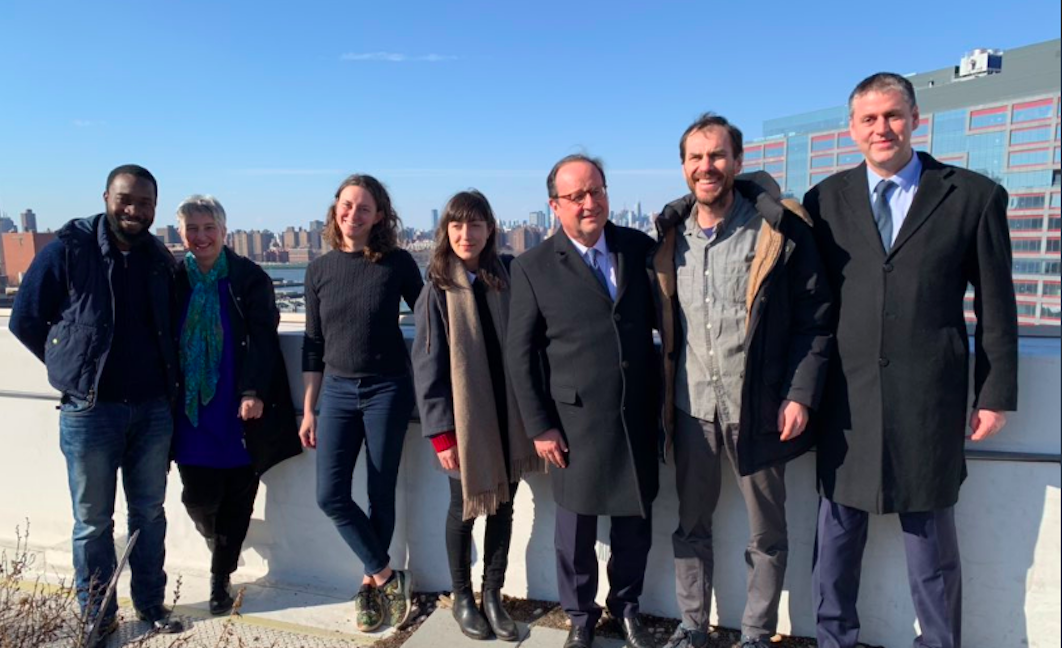 François Hollande Made a Surprise Visit to New York

We’ve come a long way from the Times Square moshpit of press, security, and French expats of 2015. Former French President François Hollande was in New York on Monday, March 11, for a visit as fast as it was discreet. The former Head of State participated in meetings with social and environmental entrepreneurs as a part of his work with the organization he founded in 2017, Fondation La France s’engage, which supports social innovation projects in France.

“Our objective was to learn from our partners. The relationship with others is less easy when there are cameras. There were no political stakes. It was really a learning expedition,” explains Nils Pedersen, GrantMaker and senior manager of institutional relations at the foundation, to justify the lack of media involvement in the trip.

In New York, the former resident of the Elysée Palace and some representatives of La France s’engage (including Alice Barbe, co-director of the SINGA France Refugee Aid Association, supported by the French foundation and a lauréat of the Obama Foundation) visited with social entrepreneurs at Columbia University’s business school. He then traveled to Brooklyn Grange, an impressive urban farm in Brooklyn Navy Yard, where he tasted some of the center’s cultures dedicated to sustainable development.

This is the first time a former Head of State has visited this farm, which has become a reference in urban agriculture. “He was very interested. He asked questions about our business model and employee practices. It was brave to walk in the mud,” remarked Anastasia Plakias, co-founder of Brooklyn Grange. She continued, saying she admires French initiatives to promote urban agriculture and has shared her expertise with several projects in France in the past. “We’re interested in the potential for collaboration between New York and Paris in this area.”

Before going to New York, the former president was in Boston where he attended a conference on Europe at Harvard’s Kennedy School and met researchers and entrepreneurs from the university’s SICI social innovation laboratory. “The objective of the trip was to create partnerships with Harvard and Columbia, to share knowledge, to talk about exchanges between social innovators in France and the United States,” says Pedersen. “It’s important to share with other organizations to create a network around social innovation.”

Politics were not entirely absent from this quick visit. Hollande took the opportunity to meet with Secretary General of the United Nations, Antonio Guterres, to discuss the international state of affairs. He concluded his visit on Monday evening by meeting for an hour with about 20 socialist activists from New York in a hotel. They discussed “the current events, how to make the socialist voice heard again, the fight against populism, Europe, what it means to campaign abroad,” explains Sylvie Poulain, head of the New York branch of France’s Socialist Party (PS) and the organizer of the meeting. She described the meeting as “very friendly where he became interested in who we were and what we were doing in New York.”

“Everyone came out enthusiastic and re-energized and engaged by his friendliness and presence. At the same time, you could feel that a head of State was speaking,” she recalls.