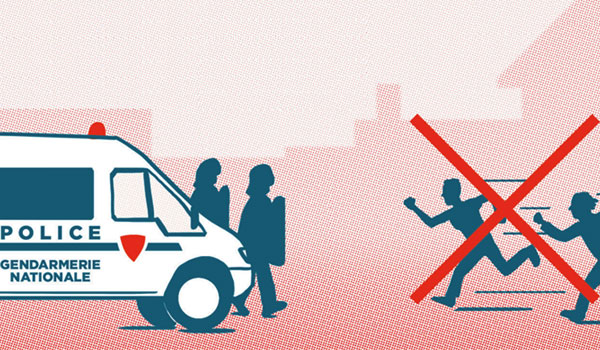 France’s Advice on How To Survive A Terrorist Attack

In the wake of November’s terror attacks, the French government has released a handy airline-style safety guide for escaping danger in the event of further attacks. For English speakers, we offer a translation of this vital travel guide.

The trio of instructions advise you to escape, hide, and alert, but you only need to hide if you can’t escape. Let’s say you’re able to run:

Escape yourself! Well, just escape. “Locate the danger,” the drawing says, referring to the large, rampaging ! sign, “to get away from it.” After doing so, you and two clones should lay on the ground, disguising yourselves as shadows.

IF POSSIBLE, HELP OTHERS TO ESCAPE

Success, in terror attacks as in life, is about mobilizing your unfair advantage against the marketplace. In this case, we see the first African-American Spider-man attempting to save Gwen Stacy from falling off the Brooklyn Bridge. His unfair advantage: he’s sticking to a completely vertical surface! Spoiler: Gwen Stacy dies, in the end. You, too, may not be able to save everyone, but that is the Hero’s Journey.

Once you’ve escaped, stay safe. Keep your head down to avoid being detected by the attackers or hit by stray bullets. This will be difficult, as many brick walls in France slowly retract into the ground at the first sign of danger, as depicted above. Hold your ears to avoid hearing the attackers, who may be shouting Game Of Thrones spoilers.

ALERT OTHERS TO THE DANGER

Stay escaped, and help others to avoid having to escape by dissuading them from ‘penetrating the danger zone.’ Avoid getting Kenny Loggins stuck in your head. “There’s a huge ! sign rampaging through town,” you could say. “Do not take a ride into the danger zone.” Continue dissuading them, even if they’re caught up on Game Of Thrones.

If escape is impossible, though:

Lock the door and barricade yourself in. Make sure the couch is placed in the optimal position to both block the door and view the television. If you are behind on Game Of Thrones, queue them up and get started.

DOUSE THE LIGHTS, TURN OFF YOUR DEVICES

Okay, maybe now isn’t the time to watch Game Of Thrones. Limit the chances of being discovered by going off the grid.

STAY AWAY FROM WINDOWS, KEEP TO THE GROUND

This entire house is retracting into its foundations. Get across the floor before there’s no cover left.

OTHERWISE, HIDE BEHIND SOMETHING

If you can’t find a room with a door that locks or a couch to block it, hide behind something—the more bulletproof, the better—and pose for an Instagram photo. Terrorists hate Instagram, and they despise selfies. Remind your friend that his phone is supposed to be off, but not until the picture has been posted.

IN ANY CASE, TURN OFF YOUR RINGER AND VIBRATIONS

It’s bad enough when someone’s phone goes off in the movie. And it’s worse when the person answers the phone. You might even want to strangle them for violating the social contract so flagrantly. But when a phone goes off during a terrorist attack, it’s everbody’s ass on the line. The last thing anyone needs is to be murdered because Pierre didn’t turn off his phone and had the bad taste to pick “Staying Alive” as his ringtone, giving away your position to the attackers.

Okay, you’re out of danger. Now what?

ALERT THE AUTHORITIES. THEN OBEY THEM.

Once you’re safe, call 112, France’s version of 911. Tell them that giant ! signs are attacking the populace, that terrorists are spoiling Game Of Thrones, or whatever life threatening event is happening at the moment. If you’re in hiding, though, double check that the ringer is off. And don’t use speakerphone.

DO NOT RUN TOWARDS THE POLICE OR MAKE ANY SUDDEN MOVEMENTS

The police may not know who’s a civilian and who’s a terrorist at this point in the game. If you run at them or move suspiciously, they may take that giant red X you’re carrying and those lines coming off your moving body as signs of aggression and react accordingly.

If it helps, pretend you’re dealing with American cops.

KEEP YOUR HANDS IN SIGHT

For god’s sake, keep your hands up and open. The police can’t think you’re reaching for or holding something if your hands are in the air and completely open. If you can, avoid radiating any suspicious red lines from your open hands, like the magician pictured above. In many emergency situations, magicians and mimes are shot first.