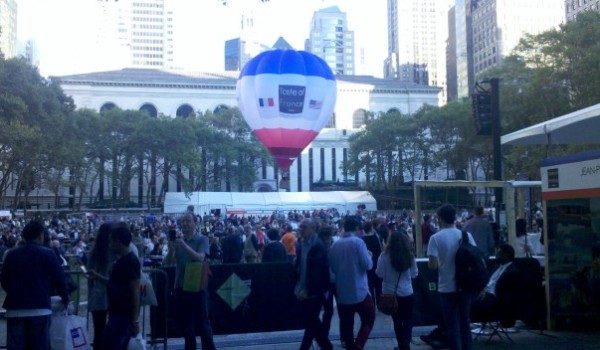 Her name is Zippy. She is the shining star of the Taste of France exhibition. She is just two years old and has four legs.

For the past two days, hundreds of New Yorkers have paraded in front of this French bulldog displayed on a stand — to get a French kiss, of course. From all around rise the “awws” and the “aahs” as soon as the doggy dressed with a blue, white and red ribbon decides to lick the compote spread on visitors’ faces. “Zippy kisses well”, confirms one of the receptionists.

Sunday afternoon. Taste of France will be over in only a couple of hours. Exhibitors are tired but visitors keep coming into Bryant Park; turning the small city park into a French village.

Associations, schools, restaurants, high-tech startups and beauty companies’ stands are surrounding the grass alleys of the park. The Franco-American friendship group The French will never forget is particularly busy. They gave away over 2,000 DVDs of past memorial ceremonies they organized on Omaha Beach in 2007 and during  the 9/11 memorial day of 2011 in Paris. “We were met with just two anti-French reactions, but the second person quickly changed his mind after talking to us”, says Patrick du Tertre, one of the four founders of the association.
All around Bryant Park’s carousel, rows of stands sprung from the earth, as did a refrigerated bubble containing a two-meter high butter Eiffel tower and even a dedicated space to learn French. Under another tent, a group of children and their mothers have gathered around two musicians singing their French repertoire. “American parents want to expose their children to French language. There are some here who don’t even understand the lyrics”, rejoyces Brigitte Saint-Ouen, in charge of children activities.
Close to the L’Oréal tent — where everyone is trying to get free shampoo — the Safran team is going for the bang: the French defense company that also works with the American Department of Defense is proudly displaying a jet engine with parts from both France and the United States.  “It’s high time Americans understand that France is about more than fashion, cuisine and perfume”, says Vincent, a French expatriate just as dazzled by the engine as his kid. “Americans need to know more about their connection with France”, confirms Bernard Teychené, vice-president of Safran for North America.
The exhibition has taken place without major hiccups besides some delays at the very beginning. Saturday morning, some stands were still not ready when the inauguration begun with the launch of a hot-air balloon from Bryant Park’s main lawn.
French Morning was here to conduct a series of live interviews, including with the French, New York-based chef Daniel Boulud and French Minister of Foreign Affairs Laurent Fabius, who was in New York for the United Nations General Assembly earlier in the week.
100,000 people were expected to visit through the two days of the exhibition. “About 25,000 people go through Bryant Park on regular days. We have easily gathered 3, maybe 4 times the usual crowd”, remarks Paul Bensabat, president of Taste of France. “It’s an unqualified success”.
The northern part of the park smells like cassoulet. To our surprise, many chefs are cooking in front of visitors to teach them French regional cuisine. Elfie Majoie has seen many people pass by her stand, where she promotes cuisine from the French southern region of Midi-Pyrénées. “Americans know us”, she says, surprised, “and they ask a lot of questions. One of them even knew the remote commune of Albi!”, she adds.
On this warm September afternoon, dozens of New Yorkers have sat around Bryant Park’s green tables to listen to Met opera singers performing on stage.
Jean-Pierre Heim is the architect is Taste of France’s stage director and even designed the hot-air balloon. He makes his way through the tables to reach his impressive machine, tied down by long ropes from all sides of the lawn. “It would be amazing to have both American and French flags on the hot-air balloon for next year’s show”, he fantasizes. “For now, we are going to take some time off and we’ll see about next year”, adds Paul Bensabat, president of Taste of France. “We are going to take some rest, get feedback and organize a meeting with everyone”.
“Do I want to go to France?” wonders a bewitched Samantha, a young New Yorker lying on the grass in the hot-air balloon’s shade. “Definitely, I would go in the blink of an eye.”