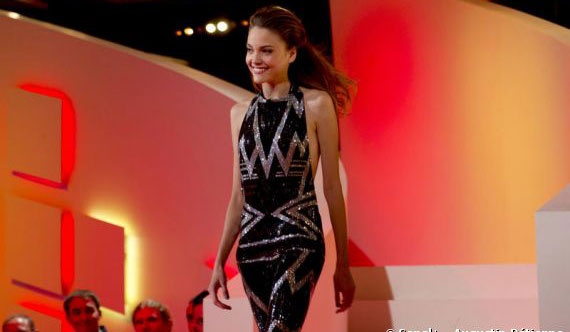 Why in France Even the Models Are Intellectuals

An editorial in the newspaper Le Monde this week lamented the disappearance of the intellectual from American campuses. Oh, how French, right? But it’s true that France is a place that values intellectuals, that still gives them a place in national conversation . And the national conversation, if you look at a mainstream media like television, actually is smarter in France.  Which might explain a peculiar genre on French television: the babe who is expected to have a brain.

All television all over the world puts pure babes on air, shapely women whose only role is to be eye candy (c.f. Vanna White, showgirls on Italian variety shows, the escorts during the Oscar ceremony, etc). But in France, one network famously casts total bombshells who are also expected to actually speak thoughtfully, analyze the news, and be clever. The network is Canal Plus, and the shows are the Grand Journal and the Petit Journal, Daily Show-style live programs, that mix news, humor, and high-profile guests. They’re an enormous ratings success and are among France’s very influential news media.

As a pseudo-evening newshour, the Grand Journal has a pseudo-weather forecast presented by…a weather-girl, of course. Enter the bombshell. The weather segment is actually a pretense for a clever humor piece done to camera (in which a weather map gets placed at some point). It’s basically a few minutes of stand-up comedy delivered by a former model.

The latest model added to the Canal Plus cast has recently been at the center of a backlash on Twitter, because the show’s producers decided to cut the camera angle that, upon her entrance onto set, shot her from behind, providing a full-screen daily dose of her lovely derrière. This one isn’t the Grand Journal’s weather girl, but the equivalent role on the Petit Journal, where former model Ophelie Meunier does a brief pop culture piece to camera every night.

“We hadn’t really figured on viewers being so focused on my behind,” she explained last week. “So when we realized it was probably a little bit too much, we decided to have me come onto set facing the camera.”

Gosh, maybe casting a model and framing her ass wasn’t such a good idea? Maybe that wasn’t the best production strategy if what really matters is what she’s…saying. Wise decision, undoubtedly, to focus on something else—like her front side—during her entrance. But not one that’s not settled well with viewers, who are still expressing their disgruntlement all over social media.

Translation: “The entrance from behind is evidently over and done with

Actually,on Twitter, they’re also expressing the view that Ophelie is no good. Ever since her start last September, the views on social media about her performance haven’t been kind. And frankly, Ophélie is, at best…fine; at worst, stilted. Which, when you’re a second-year journalism student (yes, after modeling for five years she went to journalism school) with no broadcast or writing experience, is in the natural order of things. And even though it might have been easier to avoid that scenario by casting someone with, say, some proven experience of being clever on camera, well, Canal Plus has decided to let he get her training live on air. Presumably because she must not be doing the ratings any harm.

Could you imagine a member of the Daily Show or Colbert Report cast who was merely “fine” or “stilted”? Could you imagine any models on those shows? Then again, maybe American audiences would love it. Certainly no one here really seems to care much. Being very beautiful goes a long way for French audiences who seem both to expect a lot from these pretty girls—being funny, being on-point—and are perfectly ready to forgive their being rough-around-the-edges on prime time.

So in brief this is the message: in France, they like their models with brains. It’s not enough to be pretty—you have to be smart too, and witty, and quippy. Or in some cases, just put out a good effort and we’ll hang on to your smile, or your ass, and give you a pass. There’s a special place in people’s esteem for brainy bombshells, and a special place on TV for really pretty girls who are trying really hard.

I can’t decide whether this is so subversive it’s feminist (our babes have to be smart!), or so sexist it’s laughable (we only cast models).

The French would undoubtedly think this a very American dilemma.