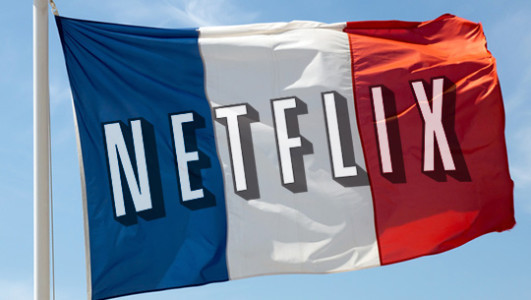 Why France Is So Afraid of the Big Bad American Netflix

It’s finally here. After a long wait and much doubt, Netflix came to France today and the lead-up to its arrival couldn’t have been more…French. The process was like France’s own version of the five stages of loss and grief, and it’s become a recurrent trope in recent years when things like globalization and technology —inexorable disruptive realities— have slowly but surely forced change on the habitual ways of doing things. The television and film industry is no exception. Here are the five stages of France’s mourning the arrival of Netflix.

1. First, there was denial:

Over a year ago, when the news of a potential launch started to spread, there was mostly apprehension. Another big American export from Silicon Valley that wanted to come barrelling into the French market and upset stuff. This was not so long after the French government had officially blocked the sale of Dailymotion (the French YouTube) to Yahoo, in May of last year. The mood was about status quo and protectionism, not about the ineluctable rise of streaming technologies and the fact that consumers, including a majority of French people, were already viewing a ton of content on demand on their devices and TV’s, and that Netflix would be supplying a video à la carte service for which there was already a growing demand. And no real obvious French equivalent.

2. Then there was anger:

In the face of a primal French fear of being devoured by an American giant, the reactions of any number of heavyweights here were pretty hostile. Stéphane Richard, the head of Orange, one of France’s biggest cable, telecom and media companies, defiantly declared that he refused to become the “Trojan horse of Netflix,” as though the arrival in France of Netflix’s video on demand service were some kind of insidious American invasion with the destruction of the French market as its main objective.

Netflix’s future competition wasn’t the only one displaying hostility, the French government also made some worked-up declarations. The then Culture Minister, Aurélie Filippetti  (who is quite close politically to Arnaud de Montebourg, the Minister of Industrial Renewal and the main engineer behind the block of the Yahoo purchase), criticized Netflix for setting up its headquarters in the much more fiscally competitive Netherlands, rather than France, and made something of a declaration of war. She proclaimed that she was committed to a “strategy supporting the cultural and digital sovereignty of France.” Read: le Netflix will never conquer la France under my watch.

3. After the anger stage, came the bargaining:

But like it or not, happily based in Netherlands, and despite resistance from France’s cable companies, all of which have refused to carry Netflix, essentially blocking the American company’s direct access to streaming on TV except via connected televisions—despite that, Netflix maintained its plans to set up shop in France on September 15th. Either to send a message to Netflix, or simply realizing that the French video content market was about to receive a shock of innovation with which it wasn’t necessarily prepared to compete, Filippetti, the Culture Minister, decided to make some changes.

In July, she announced that feature films could be made available for broadcast on television two months earlier that previously, and reduced the delay for making films available for VOD from three years to two years. These were changes that would allow French broadcasters to be a bit more competitive with Netflix without really having to change their business models or their offers. I don’t want to say this is very “French,” but it certainly isn’t very radical. But it was something.

4. Then came depression and the hunkering down stage:

Netflix might be coming no matter what, but the French weren’t going to let the Americans have an easy go of it. After all, Netflix is an enormous company, with nearly 50 million subscribers worldwide—that’s not far from the population of France—and the heavy-hitting bargaining power to match. If all the national cable companies refused to partner with Netflix to give the company streaming access on TV, it’s because they found the company’s profit-sharing offer (90% for Netflix, 10% for them) too low.

Arguably, it’s a bargaining hold-out rather than a total denial hold-out, and in a sign that there is a stage that comes after depression, even Stéphane Richard, of Orange, has made comments implying that eventually a deal could and will be found with Netflix.  But industry actors are also holding out because they consider that the video streaming newcomer has an unfair competitive advantage—a recurrent complaint in France in the face of disruptive innovation—because, since it is based in the Netherlands, Netflix avoids the audio-visual taxes that all French companies in the industry have to pay to subsidize French film and television production.

This is true, and it probably is unfair. But it does beg the question of the viability in a globalizing economy and an increasingly borderless media industry of the French system of protectionist subsidies for its own productions. The new French Culture Minister, Fleur Pellerin (who is also—and this is undoubtedly relevant—the former Junior Minister for the Digital economy) said that Netflix had made an “economically rational” choice by not setting up HQ in France. Heresy by traditional standards in France. Change is possible.

Indeed, like it or not, things change, and that means letting go.  Something the French aren’t very good at doing. But just in the past two weeks, two of the big television channels with rival streaming services have announced Netflix-induced changes. Arte, France’s leading public channel for independent film and avant-garde television, announced the launch of a movie-streaming platform (in addition to its already existent instant replay platform) where it will make a significant part of its film catalogue available—for free. Just last week, Canal Plus (the French HBO) launched a new ad starring a fabulous John Malkovich to promote the latest upgrades to its own on-demand streaming service, Canalplay. (Smart marketing to get an American who is a renowned Francophile to do your anti-Netflix ad in American-accented French).

Undoubtedly, as the French industry works through its loss and grief, and is able to acknowledge that television as they once knew it is simply over, more change will follow. Meanwhile, the first Netflix-produced French series is not, as Netflix CEO Reed Hastings joked, The House of Versailles, but rather Marseille: drug lords, corruption, politics and intrigue. Probably coming soon–since this is how our content economy is evolving today–to every Netflix platform in the world. Something the French industry should look forward to.

Renée Kaplan is a French-American journalist based in Paris. In her blog, l’Amie Américaine, she writes about the latest news and buzz in France.