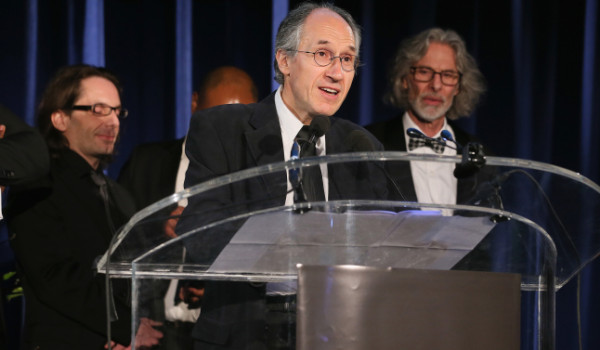 For Charlie Hebdo too, it’s Hard to Be Loved by Morons

When Charlie Hebdo editor in chief Gérard Biard and film critic Jean-Baptiste Thouset appeared on the red carpet of the PEN awards on Tuesday, they didn’t look very comfortable in their black suits and ties. They came to New York to accept PEN’s prestigious Courage Award on behalf of the paper, so despite feeling somewhat out of their element, the Frenchmen braved the formalities of the evening with grace.

The decision to honor Charlie Hebdo sparked a public debate in the weeks before the gala, kicked off by six writers who decided to boycott the event. In a letter to PEN that was eventually co-sigend by more than 200 people, they criticized the French weekly for publishing “material that intensifies the anti-Islamic, anti-Maghreb, anti-Arab sentiments already prevalent in the Western world.”

Salman Rushdie and others hit back at Charlie Hebdo’s detractors. Artist Art Spiegelman was at the gala in place of one of the writers who declined to attend. “I usually always say no to these kind of things — dinners in tuxedos aren’t really my thing,” said Spiegelman, “But these moralistic arguments are so non-sensical that I had to react.” Those who did attend the gala were happy to greet the following remarks from Biard with a standing ovation: “Being shocked is part of democratic debate,” he said, “Being shot is not.”

Since Americans became abruptly aware of Charlie Hebdo after the January attacks, its hard-to-translate satire has been called racist many times in the US press. The PEN gala was supposed to be a chance to answer those accusations. “Charlie Hebdo fought for everyone,” said Dominique Sopo, president of France’s biggest anti-racism group SOS Racisme, who flew in especially from Paris, “We must not kill those who died on January 7th a second time.”

Prior to the gala, Biard and Thouset went on a kind of explanation tour of the US trying to decode Charlie Hebdo for Americans. On the morning of the ceremony they gave a conference at NYU where they went into “France’s long tradition of satire,” of which the Charlie Hebdo is a part.

An example of this work can be seen in this excerpt from a French documentary that has been widely featured since the January attacks. It was filmed during an editorial meeting in 2006 after protests broke out in response to Danish caricatures of the prophet Mohammad. The cartoonists, three of whom were slain in the Charlie Hebdo attacks, are deciding on what to put on the cover. They choose a drawing of the prophet hiding his face and crying. “It’s hard to be loved by morons,” he says under a title that reads, “Mohammed overwhelmed by fundamentalists.”

In this cartoon it is the word “fundamentalist” that is important. Mohammad is a good guy, squarely on the side of moderation. Fundamentalists are twisting his religion for their own political purposes. “It’s not about offending, but rather about questioning,” said Biard, “Charlie Hebdo has always fought against racism, discrimination against minorities, the week and the poor. We are not fighting against religion but against the use of religion in politics.”

The subtlety of this position is often lost on American audiences. In recent weeks a group that describes itself as “anti-Islamist” held a Mohammed caricature competition that was attacked by two gunmen in Texas. Comparisons between the organizing group, Pamela Geller’s American Freedom Defense Initiative, and Charlie Hebdo were immediately drawn in the US press, but also by Geller herself in a speech before the cartoon contest.

It’s hard to be loved by morons.

Emmanuelle Drouineau contributed to this report.