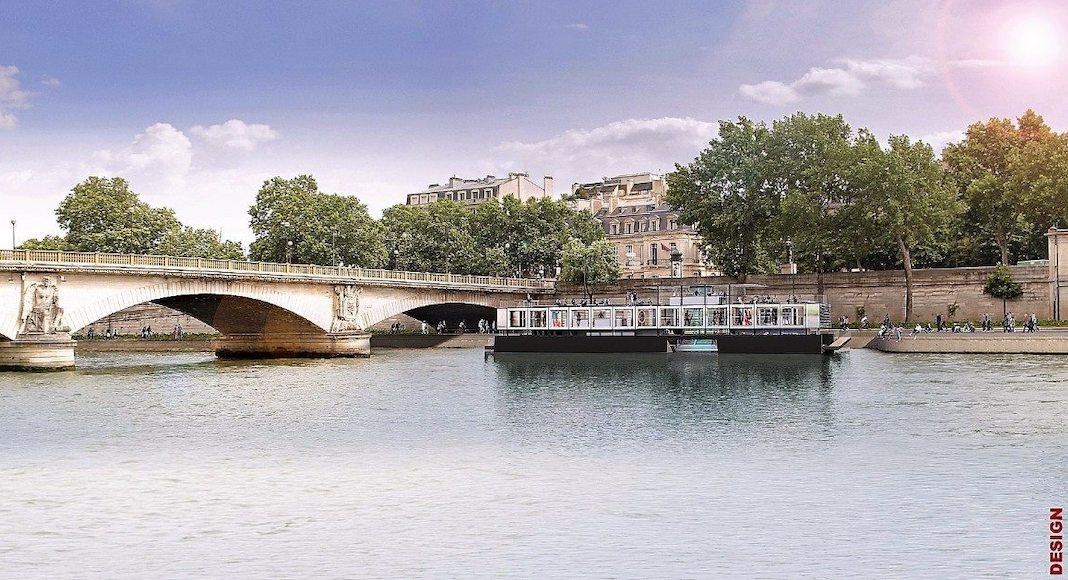 An art center entirely dedicated to street art is opening soon in Paris. More than a museum, Fluctuart, a temporary exhibition space located on the Seine, will welcome for its inauguration the American artist Swoon, whose work has been the subject of major retrospectives at the Brooklyn Museum and also in Cincinnati. Nicolas Laugero-Lasserre, co-founder of this cultural place set up on a boat, explains its origins.

You’re opening an exhibition space exclusively dedicated to street art. What will differentiate this place from Art 42, the museum you installed in the computer school 42?

Nicolas Laugero-Lasserre: The two projects have nothing to do with each other. Art 42 is a museum. We opened it in 2015 and exhibit 150 works of urban art there, but that’s not all. We also showed the first painting made by an artificial intelligence. The Fluctuart project is quite different. This art center will certainly exhibit around fifteen of the most important artists on the international scene (Banksy, Invader, JR, Shepard Fairey, Vhils…). It will also be a temporary exhibition space where artists will come to create works that they will show in the spirit of street art. That is, free of charge and on media that may be covered by other artists over the years. But Fluctuart will also and above all be a place of life and celebration. Next to the bookstore that we’ll open on site, which we’ve entrusted to Christian Omodeo, a café and a rooftop will welcome the public and host events.

Your project is entirely financed by private individuals. What’s your business model?

Two million tourists and people from Ile-de-France pass by the quay each year. It’s for them that we’re opening this place. The investment is heavy, around 4 million euros. But if the place generates 2 million euros between the bookstore, the café and the bar-restaurant, we’ll be balanced out.

Does the city or region subsidize you?

Not at all. If the project is part of a larger project carried out by the municipality and the autonomous port in order to “reinvent” the docks, we do not benefit from any public money. The scheme is a 20-year concession. We have this period to make our investment profitable.

Who are your partners?

Art lovers, like me: Géraud Boursin and Éric Philippon. The first had already created a jazz club aboard a barge moored a little further away at Pont Marie, the Marcounet.

How did your passion for urban art come about?

It goes back to the 1990s. I was born in Nice and grew up in the South of France. But when I “went up” to Paris to become an actor, I moved to the Butte aux Cailles neighborhood. In 1996, when I settled in this area, it was the area where artists such as Miss Tic, Jérôme Mesnager, Jeff Aérosol, Mosko were working… I fell in love with this method of expression and then never stopped wanting to bring street art to the Espace Cardin when I directed it. As director of Icart, the school of cultural management, I wanted to make Fluctuart a real educational tool for my 500 students. The most passionate street art lovers will provide free guided tours every day for the many visitors. The others will organize concerts and cultural events within the building.

How do you distinguish urban art from simple graffiti? When does a tag become street art?

That’s a big question. I am writing a book on this subject, co-authored with three other specialists in the subject: Nicolas Gzeley, Stéphanie Lemoine and Sophie Pujas [Editor’s Note: also a journalist at Le Point]. Urban art encompasses all the visual practices that take place in the street. This includes graffiti, which itself is subdivided into various categories (tags, blazes, lettering), but also a multitude of techniques: from painting to stenciling, from collage to sculpture.

Is this art fairly well known in France, in your opinion?

I believe so. Paris is the world capital of street art. The number of artists there is higher than anywhere else. There are countless events dedicated to urban art. The art market has been interested in it for a long time. Artcurial devotes four major sales to it every year. It is estimated that street art is valued at more than 150 million euros per year in France alone.

Recently, however, an architect succeeded in getting the courts to put an end to the extension of the graffiti route that the town hall of the 13th arrondissement of Paris had put in place. How do you react to this decision?

This decision was the result of legal proceedings brought by an architect who had built a social housing building there and by a designer. I regret it. From an aesthetic point of view, the buildings in question are not remarkable. Let us be clear. If we looked at them it was only because they were decorated with large frescoes by the greatest names in street art.

Do you still understand that we can be reluctant to the subject?

It’s normal for artistic works to make people react. For street art, I’d even say it’s in its DNA. We do not create works in the street without provoking reactions. Street artists often take on “hot” subjects: ecology, consumer society, imperialism. But I consider it fortunate that art has come out of galleries and museums. This makes it possible to democratize access. Art is not reserved for a handful of billionaires who can collect works.