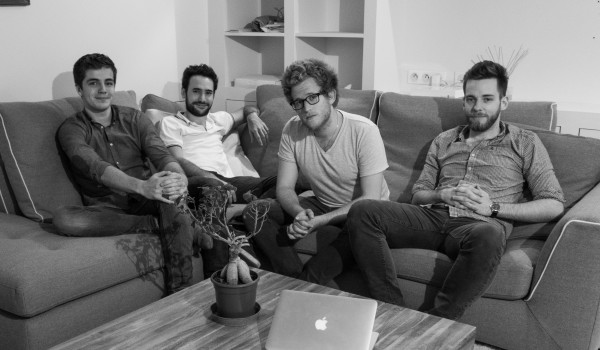 Flashgap, the French App for Party Pics, Launches in the US

In The Hangover, three friends wake up after a night of debauchery to a host of zany situations they need to correct. Of course, they remember nothing of the previous 12 hours, so they turn to their photos for clues and the Very Bad Trip (the movie’s French title) begins. Julian Kabab and his three collaborators—Fabrice Bascoulergue, Aymeric Chauvin, and Arnaud Ruols—are launching a photo-sharing app that applies this premise to any friendly gathering.

Flashgap collects photos from a designated group friends as they spend the day or night together. The app then squirrels the photos away, releasing them as a collection to all participants at noon the following day.

“The Hangover was an inspiration, but the real idea came when I had parties with my friends,” says Kabab, 24. “We used a GoPro to film throughout the evening. The next day we got together to watch the footage, and we were dying laughing for days afterward.”

Kabab wants to recreate the feeling people used to have after dropping off a roll of film from an event to have it developed. “Generating anticipation makes the experience of gratification more intense,” he says, “and making the pictures visible to everyone at the same time is an opportunity for interaction between people.”

The team raised $1.5 million last month for their US launch—a moment of truth for an app wading into the potentially enormous market across the Atlantic. At the moment, Flashgap has 180,000 users, with 100,000 of those in France, and a staff of 13 in Paris. They plan to add a few more positions in the United States.

“We don’t yet know whether we’ll base ourselves in California or New York,” says Kabab. “The college party culture is more of an East Coast thing, so it would make sense to be there, but at the same time, it’s logical for a startup to live on the West Coast.” Either way, culture shock shouldn’t be a problem for Kabab, whose has an American father and a French mother.

Flashgap has generated no small amount of interest since it launched ten months ago in Paris. Its marketing effort in the US is just getting underway. “We’ll launch in time for Halloween,” says Kabab, so up your costume game and be sure to bring your phone to the party. Trick or treat? You’ll have to wait until the next day to find out.