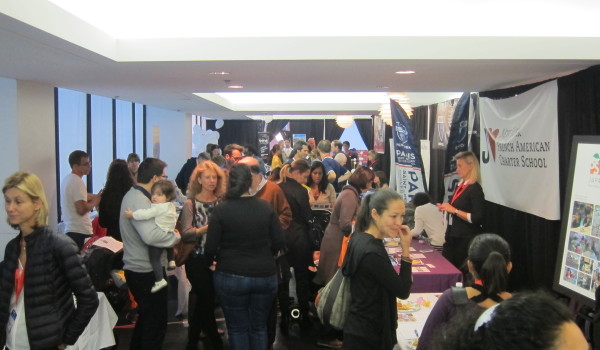 “I don’t have the right to refuse a bilingual education to my daughter,” said Thomas Vandenabeele in French at first ever Bilingual Education Fair hosted by French Morning. 16-month-old Sophie was nearby in the arms of her American mother as the family stood between booths for an American-Japanese school and a Franco-American pre-school.

“I also speak to her in French so that we can have a special relationship. I love English but French is my mother tongue and it’s important for keeping a genuine father-daughter relationship,” explained Vandenabeele.

Professional opportunities, improved family communication and cognitive skills — these are just a few of the reasons hundreds of people took the occasion to express their support for bilingual education while learning more about bilingual opportunities. The fair brought some 70 exhibitors from schools to book editors together at Hunter college in midtown Manhattan, and was organized by your favorite French website along with the French american Foundation and the French embassy.

During the event, French Morning unveiled its very first Guide to Bilingual Education, a catalog of 43 entities offering a French-English bilingual education in the tristate area accompanied by several articles on the advantages of bilingualism. The guide is meant to help parents in an age where having a child who is proficient in more than one language is an ambition shared by many, and bilingual programs are proliferating in New York public schools.

Voices of interest and support could be heard at the many roundtable discussions with experts on the subject. “Monolingualism is the illiteracy of the twenty-first century,” declared Jeffrey Kluger, an american journalist with three children who speak English, Spanish and French. In a discussion on bilingualism and the brain, he pointed out that bilingual people tend to be better at multitasking and reasoning, and that bilingualism may stave off dementia.

One father with a child in PS 84’s bilingual program on the Upper West Side called upon parents to reach out to their own schools. “Don’t be afraid! Have faith! PS 84 was a school no one wanted to attend at the time. We built this French program and every student who graduated from it went to his or her first choice middle school (college?). It’s incredible what kind of power parents can have in American public schools. It’s an opportunity. In France, that kind of initiative would be impossible.”

Several parents at the fair said that they were unaware of bilingual opportunities in New York. Marina Le Rolle Catrevaux’s children are enrolled in an school in New Jersey, but she is interested in having them switch to a bilingual program. “French is our mother tongue and we would like to hold on to that. We already speak French at home but we would like them to learn to read French and they’ll do that in school.”

Paul Smart, another Francophone parent raising his daughter in the US, has plans for his daughter to be fluent in both French and English. “She doesn’t really talk yet, so we don’t know whether she’ll end up mixing languages. But she does already call us ‘papa’ and ‘mommy.'” You have to start somewhere.