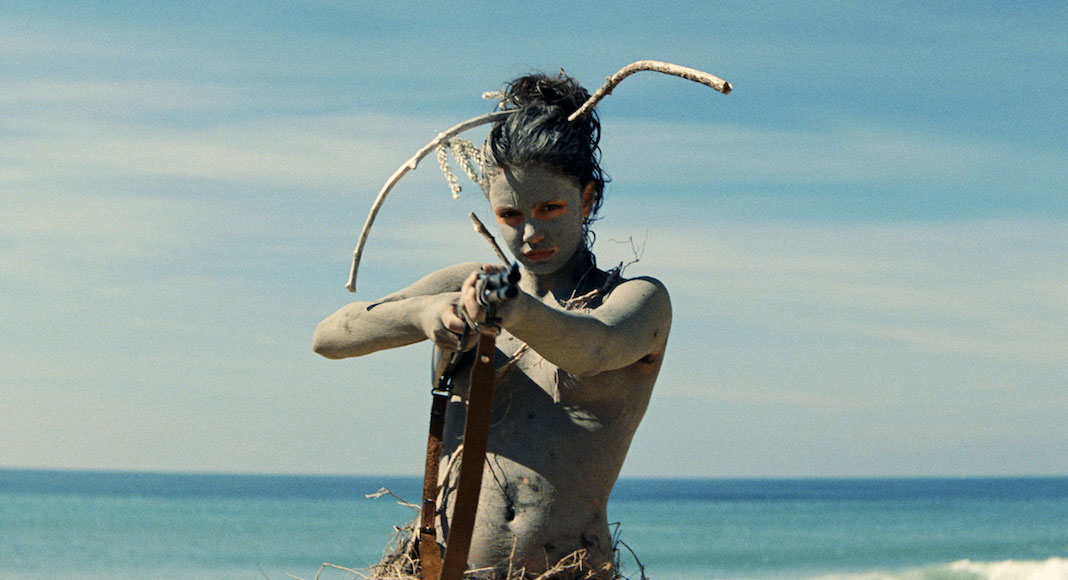 Film Review: “Ava” is a Bright Depiction of a World Turning Dark

Rendez-Vous with French Cinema this year brings us Léa Mysius’s debut feature film Ava, a bold coming-of-age story about 13-year-old Ava (Noée Abita in her first role), the summer she learns she will soon go blind.

The film’s introductory sequence of a lively colorful beach in prime summertime in southern France is interrupted by the sudden appearance of an ominous soundtrack and a wolf-like black dog. In contrast to the vibrant and richly saturated images around which it roams, the dog makes us alert to darkness rather than light. Mysius reverses and overturns the notion of filmmaking and its possibilities here, as if endlessly proving that film can exist in the dark, too—all the more poignant considering the film is shot on 35mm, a medium largely necessitating a strong light source. Right from the start then, it is no longer the light of the sun and the colorful bathing suits that attract our eyes, but rather the dark black dog, and soon after, Ava, a somber character herself. Darkness shines brighter than light does, markedly evocative for a film about vision and the loss of it.

In its depiction of the freedom of life on the run, the film takes on a discernible resemblance to Godard’s Pierrot le fou (1965): Mysius’s characters turn into figures in the wild, their off-screen voices interspersed with fragmented scenes, emblematic of the rupture of a linear film construction. Ava and her fugitive love interest Juan (Juan Cano) paint their bodies with clay and steal from various nude beachgoers. Here the shots are nonlinear, montage becoming more evident (her use of split screens emphasizes this). The protagonists come into close proximity to Marianne and Ferdinand’s bandit figures, just as the narrative becomes fragmented like Godard’s, and the film’s montage made palpable.

They later travel through a deserted road where Amadou & Mariam’s song “Sabali” plays (Mali’s famous blind husband-and-wife duo). Although Mysius does not invoke a breaking of the fourth wall as Godard does, and is in no way as self-conscious as he is, she does impose a certain reflexivity. In this dancing sequence, Ava lets herself be seen: she no longer hides her body, and in turn looks too—her eyes no longer covered by a blindfold nor by the darkness behind which they cannot see. She turns more naked and self-conscious than in the film’s more literal nude shots. She is here no longer “somber and invisible” but becomes “bright and luminous” as she once describes Juan’s other love interest, yet (and this distinction is important) luminous through her darkness.

In this desolate space, the film adopts its more evocative image and meaning: it allows
for Ava to take up the film screen in a natural way, dancing freely in space. This deviation from narrative is conceivably one of the film’s most successful nuances—Mysius does not contrive to make any explicit and blaring allusions to Ava’s oncoming blindness. Instead, the camera focuses implicitly and renders an honest witnessing of a true moment. And perhaps most importantly, it allows for Ava herself to briefly experience a happy occurrence with her vision still intact. Through it, she is able to become more self-conscious of her being, of her coming of age, and hence also comes closer to an acknowledgment of her declining sight.

In its more allegorical scenes, such as a surrealist nightmare sequence, constant black shots, and imposed symbols alluding to darkness and blindness, Mysius is perhaps less strong. Ava emerges as more successful when Mysius offers us less help, urging us to slip into the film and decipher its meaning through an evasion from plot with an emphasis on transient moments, manifested montage, and a masterful use of colors and cinematography. The film thrives in those shots in which the story seems to unfold spontaneously through the life brought about by its largely nonprofessional actors, who fill up the screen with light and dark flickers and enable cinema’s inherent plot line to manifest itself—that of vision and the play with light.

Where brightness and color should take over our eyes’ attention, Mysius makes it so that darkness does so in Ava, as if playing with our own faculty of vision throughout the film—and ultimately playing with the nature of cinema as an agent no longer of light but a lack thereof.