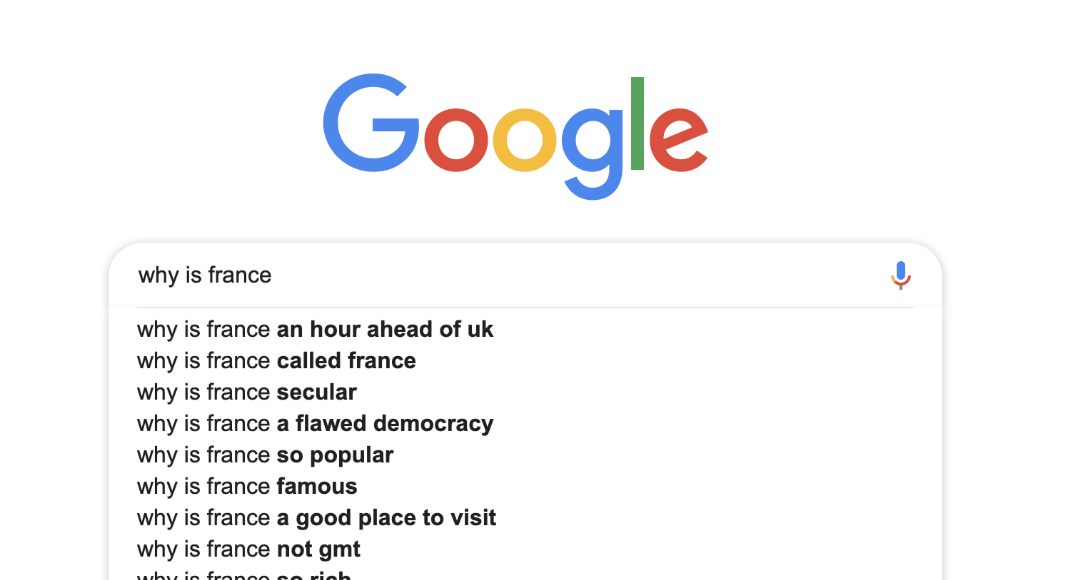 The Questions the Brits Most Commonly Google About the French

Google reveals our inherent biases, deepest wonders, and the inner workings of our souls all through one simple tool: autofill. You may have been searching for if McDonald’s fries were vegan, but then Google suggested you learn if they were healthy… so you clicked that instead because that’s what you deep down really want to know.

Now, we’re looking at what the Brits are googling about France. 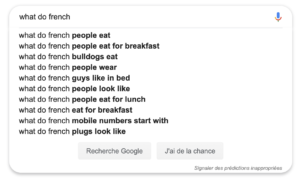 Tea might not be as beloved by the Brits as we thought if they’re looking for “what the French eat” four different times — breakfast twice, lunch once, and once just generally. The Brits would also like to know how to recognize a French person (what they look like, what they dress like) and, interestingly, what French men like in bed.

There’s a lot of concern about when France “shuts down for summer“ (which is a hilarious hot take) and generally goes on holiday. The Brits are also unnecessarily concerned about when France changes its clocks for daylight savings (answer; at the same time as the U.K.). There are history buffs wondering when France fell to Germany and hopeful moneymakers want to know when French lotto numbers come out. 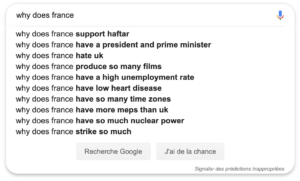 The criticism is apparent: why does France strike so much, support the Libyan National Army and hate the U.K.? But jealousy seems to be there too: why does France produce so many films, have low heart disease, more meps, have so many time zones, and have so much nuclear power? 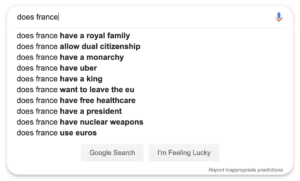 The country with its own constitutional monarchy-slash-parliamentary system is having trouble understanding France’s semi-presidential system of government. Does France have a monarchy? A king? A president? The Brits are also asking the types of questions you might if you were considering moving there (hm, wonder why?): does France allow dual citizenship? Have free healthcare? Use euros? And most importantly, does France want to leave the E.U.? 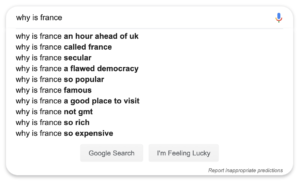 Rich, expensive, famous, a good place to visit, and so popular — to the Brits, that’s France, and they want to know why. There are those with less optimism (why is France a flawed democracy, why is France secular) and those really just want to know why is there a time difference between the U.K. and France. 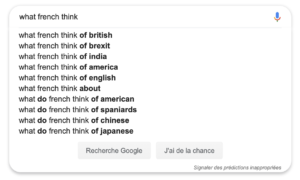 The reputation of the Brits as arrogant is only confirmed by how much they want to know about what the French think of them and Britain-adjacent things. India, America, and a few other countries made the list as well. And then there’s the gem: “what french think about,” as though they might not think at all. 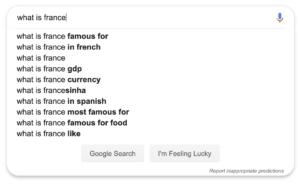 Finally, we land on the fabulous question: “What is France in French.”