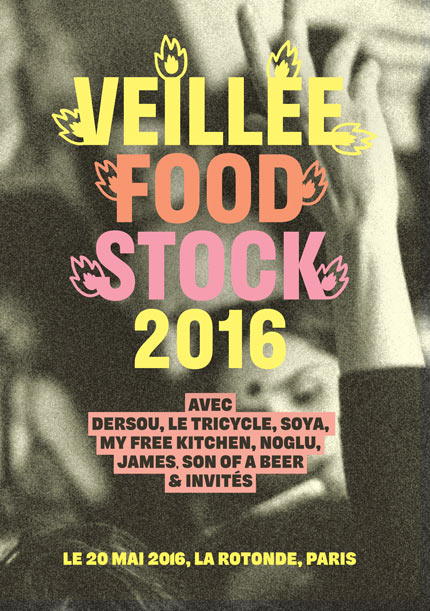 Eat Your Way Through the Night at the 2016 Veillées Foodstock

Come for the food, stay for the music. Or is it the other way around? Whatever tickles your fancy, Le Fooding has you covered. The French food-centric event agency, turned guide, turned authority on everything food-related turns fifteen this year but hasn’t aged a single bit.

For the seventh year in a row, Le Fooding is hosting its annual music-meets-food event, the Veillées Foodstock. On May 20th, at the picturesque Rotonde on bourgeois bohème Place Stalingrad in the northern nineteenth arrondissement, ‘festival-goers’ will indulge in trendy eats and delicious sounds for the evening. Before you book your tickets, get the lowdown on what’s for dinner, courtesy of French Morning.

Paris, like nearly all its urban counterparts throughout the world, has experienced a wave of restaurant openings dedicated to a novel, healthy approach to food. That’s right: move over, beurre blanc and entrecote, there’s a new popular crowd in town. The classics haven’t disappeared, but a younger, more health-conscious Parisian clientele is on the prowl for quinoa rather than fondue, and the Veillées Foodstock will be their heaven on earth for a night.

Illustrating the idea that healthy food can also be delicious, I’d-like-another-helping food, Le Fooding has rounded up some of the trendiest spots in town. Set out to be pit stops in a journey for discerning taste buds and palates, each restaurant selected by Le Fooding to be part of the Foodstock will serve a signature dish.

Start out with a cocktail – to warm you up or cool you down, depending on the tricky Paris weather – courtesy of Jameson whiskey and the talented Amaury Guyot of right-bank darling Dersou. Showcased for their impeccable drinks and food, Dersou took home the Fooding’s Top Restaurant distinction this year, thanks to the talent of chef Taku Sekine and a well-crafted cocktail pairing menu courtesy of Guyot. For those with a thing for chef sightings, Sekine will be at the helm of his own pit stop at the event, serving up lemongrass chicken wings.

Like a gourmet market, each pit stop at the event is centered on one ingredient: poultry (with the aforementioned Sekine), lobster, sausages, vegetables, and one last stop for dessert.

Lobster rolls come courtesy of Noglu which, as its name hints, is a Paris hot spot for gluten-free and organic fare. Expect a lobster roll that’s anything but standard yet definitely tasty. Next, you might let your nose guide you towards the smell of sausages on the grill… but these aren’t your standard dogs served by a sketchy man out of an even sketchier cart. Not only are Coralie and Daqui, founders of Le Tricycle, some of the most beautiful people you’ll ever meet, they also serve up a meat-free hot dog with inventive, flavorful fixings. The Banh Mi Dog, served at the event, mixes fresh Vietnamese flavors and the comfort you get from biting into the pillow-soft hot dog roll.

Another power player on the healthy eating scene is Soya: gluten-free, vegan, and organic vegetable-centric food served in the heart of the trendy Goncourt neighborhood. It’s no surprise, then, that they are the designated purveyors of a veggie mezze at the event, complete with raw vegetable chips to curb any snack craving that might hit over the course of the evening. Don’t forget to save room for dessert: organic eatery My Free Kitchen will be there as well, satisfying party-goers’ sweet tooth with a vegan chia pound cake to end dinner on a high note.

Speaking of notes? Guests won’t be eating in silence: the round up of entertainers includes singer-songwriters Keren Ann, L’Impératrice, and Gaëtan Roussel. Thomas VDM and Quentin Margot, the evening’s comedians, are sure to keep you laughing between mouthfuls.