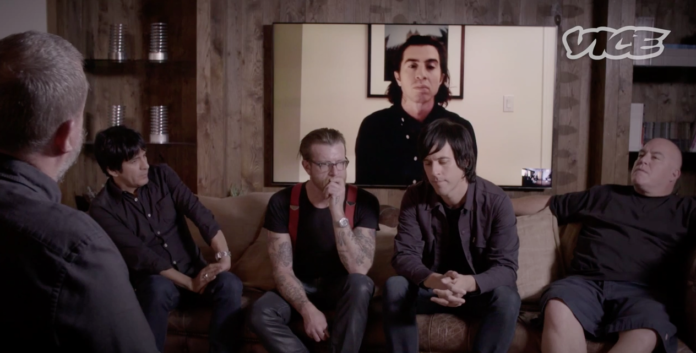 Vice has released their interview with Eagles Of Death Metal about the attack at Le Bataclan on November 13th. It’s the first time the band has spoken about the events around the attack that left 90 people dead at the venue.

“I thought it was the PA cracking up,” says Eden Galindo, a guitarist with EODM. “And then I realized really quick that it wasn’t.”

Members of the band’s entourage recognized the attack for what it was. Some of the band exited through side doors onto the street. Fans began to rush the stage to escape the chaos, but there was no exit.

Bassist Matt McJunkins found himself barricaded in a room with fans. “As soon as we get there, there’s a few people that have been shot and were bleeding, we started grabbing chairs to barricade the door. There’s a little minifridge… someone had left a bottle of champagne in the room for, like, a post-show thing, and we had that to use…”

“Yeah,” McJunkins continued. “Because that’s it. That’s all we had.”

“I cannot wait to get to get back to Paris,” Hughes says. “I want to be the first band to play in the Bataclan when it opens back up.”

“Because I was there when it went silent for a minute. Our friends went there to see rock ‘n’ roll and died. I going to go back there and live.”

Watch the full interview on Vice.