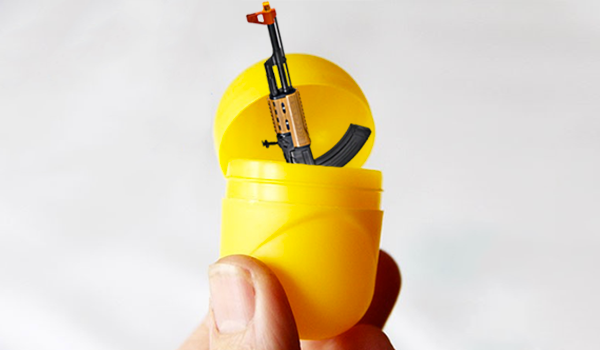 The USA: Where Kinder Surprises are Illegal, but Not Guns

Some people can only collect the funny questions the French ask about Americans and repost them. We at Frenchly can go deeper because we’re Americans and we’ve got answers. So while others poke fun with impunity, we will do it with authority. Our first question comes from Audrey Guedj, who asks:

“Why do Americans ban the Kinder Surprise and not guns?”

Great question, Audrey. Can I call you Audrey? Can I call you Françoise? Listen, Françoise, I need to do a little background for the American readers first. I hope you don’t mind:

My fellow Americans, Françoise here—if that is her real name—is talking about a chocolate treat (because she’s French) from Italian candy company Ferrero (because Italians are better at chocolate), who you might know best as the makers of Ferrero Rocher, that fancy hazelnut candy you only buy at the store if there’s no danger you’ll be asked to pronounce the name.

Basically, Kinder was able to combine the disappointment of Easter chocolate with the cheap thrill of those quarter vending machines with the plastic eggs in them. Inside them are little colored figurines—could be the Travelocity gnome’s brother doing various home repairs, could be a reject from the Country Bear Jamboree trying to stave off unemployment with a series of odd jobs—the sort of things that kids and adults alike can collect, unlike the Red Rose Tea figurines which are strictly the obsession of aging serial killers.

Françoise—are you still there?—in the interest of total disclosure as the cultural attaché here, when I say “quarter vending machines with the plastic eggs in them,” it’s because I know of no specific name for these contraptions. They look like this—

—and might contain anything ranging from toy jewelry to counterfeit Muscle Men to stretchy, sticky hands that could grab a paper off a desk three feet away until it was covered in dirt and hair fifteen minutes later. Hardly worth 25¢, Françoise, but the heart wants what it wants.

So, yes, Françoise, there is a Kinder clause: thanks to the Federal Food, Drug, and Cosmetic Act of 1938, no “confectionary product with a non-nutritive object, partially or totally embedded within it,” can be sold in the United States unless said object is deemed to have “functional value.” In other words, if shoes were food, L.A. Lights would be illegal in the U.S., while the Nike Pump would be (and is) legit as hell. L.A. Gear’s other product, the Regulator, would fall somewhere in the middle.

Over 4,000 people die from choking every year in the United States, according to the CDC. That’d be at least 68,000 American lives taken by choking hazards since the turn of the century. That’s why they’re banned.

Oh, I get it: you’re wondering why something that kills that many people is banned while guns are still illegal, since they’ve killed (or were used to kill) around 500,000 people in the same time period. Good question! Why protect a toddler from choking on a gnome with severe combined immunodeficiency disorder and not also stop school kids from shooting each other?

The Constitution of the United States ensures the right of every American to keep and bear firearms but not to buy gimmicky chocolates. Just think of France’s beloved universal healthcare: what if someone wanted to take that away after 71! You’d be reaching for your gun! Except you don’t have a gun, so you’ll have to hope the guy coming for your healthcare’s mouth is open and you can toss a Kinder Surprise down his throat!

Now, I’m staunchly anti-gun. It’s an unthinking weapon that literally will kill someone before the shooter has finished considering the action. I wish Superman would round up all the guns in the world and toss them into the sun like he did with nuclear warheads in Superman IV. All homicides, suicides, burglaries, and wars should be conducted with daggers, so that when one human kills another, they’re at least making contact (of course, then we have the Throwing Knife Problem, but no system is perfect). It’s a nice idea that would make taking someone’s life something you’ve got time to think twice about, but we’ve had the right to bear arms for 225 years now. Guns are everywhere. We’ll never find them all.

People are so fanatical about their guns here that there are people who believe their personal arsenals are going to protect them against a tyrannical government. They’re so fanatical about guns that they’ll also gleefully fund the military having all the guns it wants, plus as many drones as it needs to knock any flag-waving militias off the map from a modified Nintendo 3DS.

Not that that’s a reason to give up, not that we shouldn’t try, but it should explain to you, Françoise, why chocolate-covered choking hazards are illegal in the United States: once they’re here, we’ll never get rid of them, and the number of choking deaths per year will rise, maybe slowly, but it will, without question, rise. Well-meaning adults, educated on how to eat food without dying, will choke to death on little plastic toy eggs; high school kids in high-crime areas will be walking home, startle when they see passing cop car, and choke on their Kinder Surprises weeks before being the first person in their family to get accepted to college; children will find their parents’ Kinder Eggs buried at the bottom of a sock drawer and choke themselves or the friend they were just reading comic books with when they got bored.

Who could live with a country that lets that sort of thing happen? Better to keep the Kinder Surprise out of America, then, before Americans get used to having them around, because by the time we realize they need to be taken away, they’ll be willing to fight for them. And they’ll have guns. It may be easy to take candy from a baby, but this is America, where toddlers shoot someone about once a week.