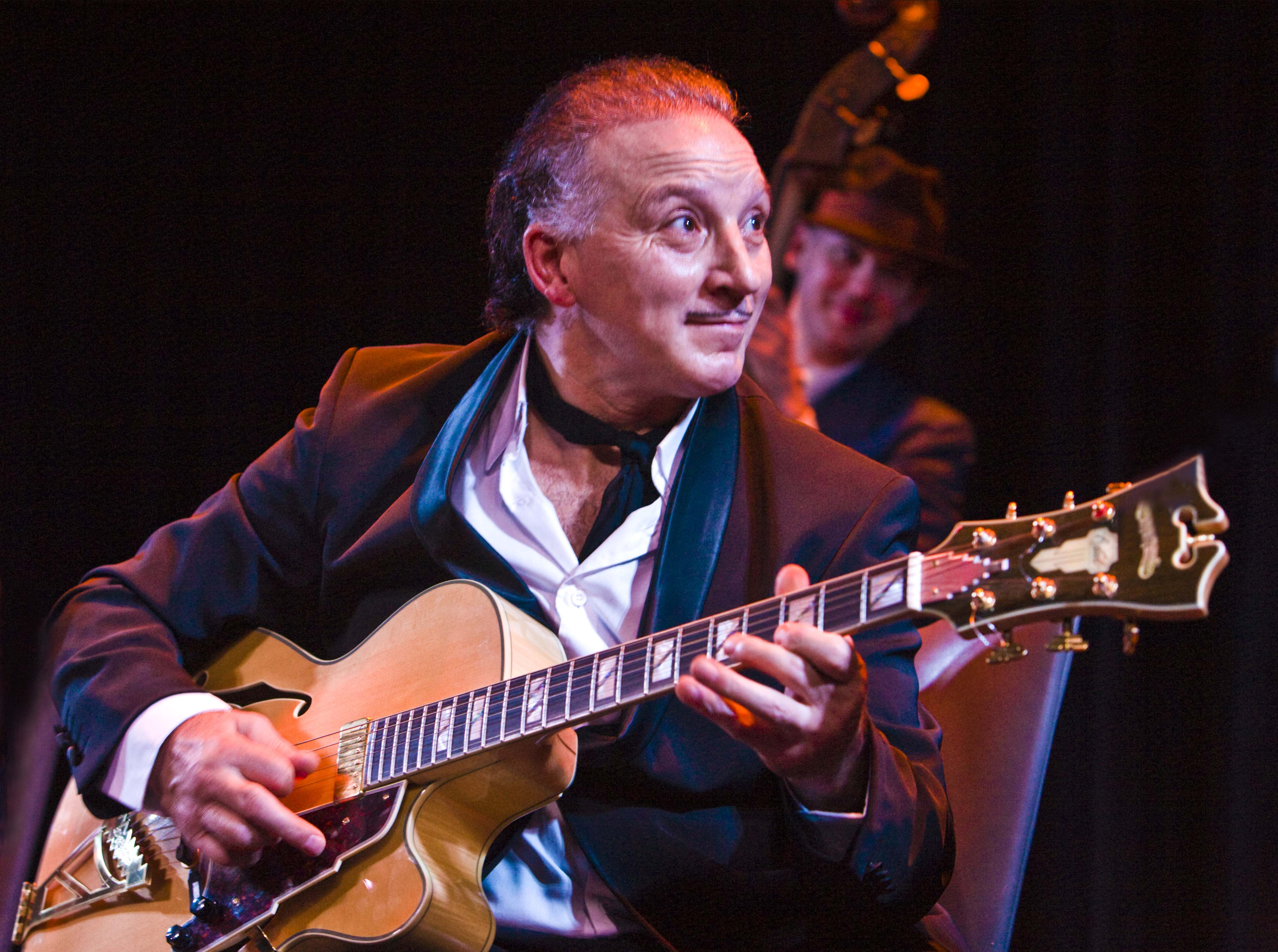 The “Happy Music” of the Django Reinhart Festival

The Gypsy jazz guitarist Django (Jean Baptiste) Reinhardt fell in love with American jazz in the 1920s, taking as his heroes Louis Armstrong and Duke Ellington and eventually touring with Ellington and jamming with Dizzy Gillespie. “Jazz attracted me because in it I found a formal perfection and instrumental precision that I admire in classical music but which popular music doesn’t have,” he said. Creating a whole new sound that blended jazz with traditional European and Gypsy music, he gained renown as the best guitarist of his time, celebrated for his performances with violinist Stéphane Grappelli at the Quintette du Hot Club de France and other groups in Paris, as well as for the brilliant music he composed until his tragically early death at 43 in 1953.

Jazz lovers have been in thrall to his music ever since he arrived on the scene. “The music gives a lot of happiness,” says Ludovic Beier, Django Reinhardt Festival All Stars’ virtuoso accordionist. “It’s like swing; it’s party music; it’s Gypsy jazz and it never gets boring. Europeans know us. Not so much Americans, so it’s nice that we bring it to you.” The band tours the United States from October 25-November 10, stopping in San Francisco, Boston, Washington, D.C. and New York.

Since its launch in 2000, the Django Reinhardt Festival All Stars have drawn hundreds of new fans around the country. A lot of the credit must go to the leader, astounding Gypsy violinist and guitarist Dorado Schmitt, who has spurred tremendous appreciation of the seductive style. Writing of a recent performance, The New York Times critic Nate Chinen, said, “Dorado Schmitt, a veteran guitarist with the roguish charisma and pencil-thin mustache required of any French Gypsy paragon, was the show’s inexorable star… he’s clearly born to the style.”
The band not only carries on Reinhardt’s legacy but it also performs new songs and interpretations, keeping every concert fresh. Besides Beier, Schmitt is joined by his three sons, Amati, Bronson and Samson Schmitt, Pierre Blanchard, Francko Mehrstein and Brian Torff. It just released the CD, The Django Festival Allstars.

“There will be 14 or 15 Gypsies on stage,” Beier says, “musicians who have been together for 20 years. We share a lot with each other. You need a high level of musicianship to play this music, and it takes a lot of patience. But inside you are free.”

Reinhardt’s life was unconventional from the start. Born in a caravan to Gypsy entertainers traveling in Belgium in 1910, he and his family soon made their way to Paris, where he quickly picked up music. By the time he lost two of his fingers in a fire at 18, he already was gifted in the violin, banjo and guitar. Admirers would later credit his entirely new approach to the guitar, notably his fluid phrasing and quicksilver arpeggios, to his working around his disability.

Once he teamed up with Grappelli in 1934, he was on his way. Their group became the first major European jazz band. An imposing man, who dressed like a Gypsy prince, he wasn’t the easiest person to get along with and was often described as an unpredictable handful. Still, he not only impressed audiences but his peers. “It was upsetting,” said trumpet player Doc Cheatham, “to hear a man who was a foreigner swing like that.”

No one gets upset now when the Django Reinhardt All Stars come to town. “It [the performance] has about as much in common with a conventional night-club experience as a tight-rope walker does with a ballerina, or Coney Island does with Carnegie Hall,” raved Wall Street Journal critic Will Friedwald. “There’s a more visceral thrill to it, and a hard competitive edge. DjangoFest is the NASCAR of jazz: You feel like you should root for your favorite player, and even make a side bet.”