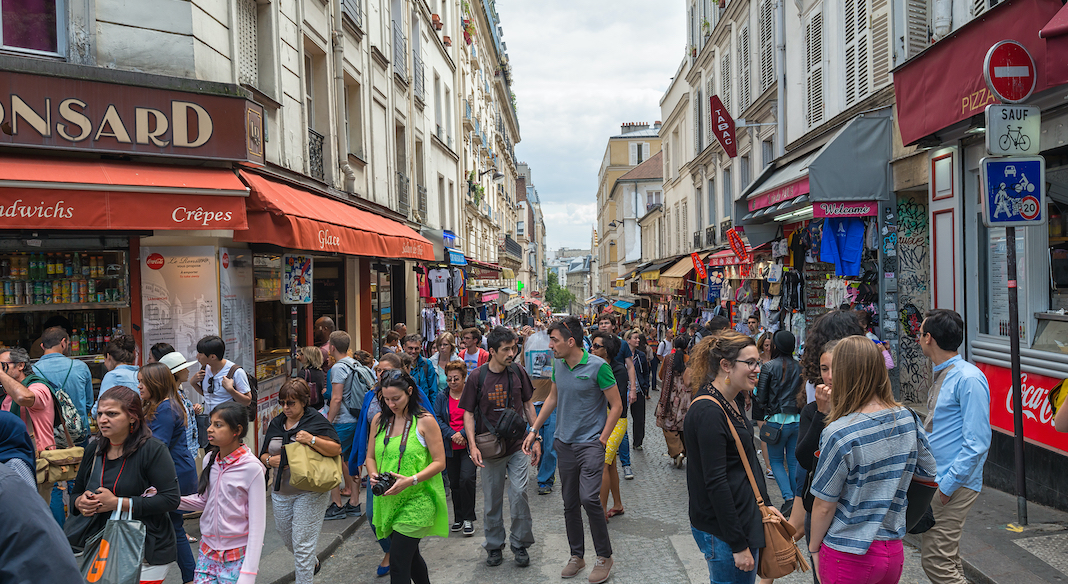 Dangerous Tourism: Why France Is Too Popular

It was almost one year ago when the residents of the tiny Parisian alley called Rue Crémieux began begging the city to block off their street from the outside world. The feared predator? Instagram.

“It has become hell,” says Antoine, VP of the Rue Crémieux Association, in an interview with France Info. “During the week it can be okay because they are tourists, they are not too disturbing. But on weekends, it’s 200 people under our windows. We’re at the table here, and people are right next to us taking their photos.”

The beautiful street became a viral Instagram hashtag thanks to its cute, colorful buildings, where, in the last year, thousands of people have come to stage photoshoots, music videos, and even bachelorette parties. But, because it’s technically a public thoroughfare, there’s not much the city is willing to do about it.

France is the most visited country in the world, with an estimated 90 million tourists coming to the country in 2018 alone. And between its food, architecture, fashion, and art, it has well earned these impressive numbers. But there can be a downside to a booming tourism industry that goes beyond the derisive sniffing of a born-and-bred Parisian as she dodges tourists on the Champs-Élysées on her way to work.

There is a point at which tourism goes from being annoying, to being downright dangerous.

French president Emmanuel Macron recently announced that Mont Blanc, the highest peak in Western Europe, will soon put a cap on how many visitors are allowed to summit the mountain per year. About 30,000 people attempt to climb the mountain every year, many of them amateurs with little preparation who attempt the trip without heeding weather or safety warnings. New regulations will require climbers to prove that they have made necessary accommodations and brought crucial equipment with them before they are allowed to ascend.

Unfortunately, the overcrowding of Mont Blanc is not just dangerous for the tourists, but for the mountain itself, which has experienced massive degradation and pollution thanks to heavy foot traffic and the trash often left behind those unpracticed feet.

Similar pollution concerns closed another one of France’s natural wonders decades ago. The Lascaux cave in the Dordogne region of France, discovered in 1940, served as a popular tourist site until 1963, when it was permanently closed to the public. Containing some of the oldest prehistoric cave drawings in the world, the cave is a world treasure. But the carbon dioxide produced by 1,500 visitors a day began to degrade the very prehistoric paintings the tourists were coming to see.

Even some of the oldest and most famous tourist sites in France have a tipping point.

In May 2019, Paris’s Musée du Louvre shut down as workers went on strike to protest “unprecedented deterioration of conditions” due to overcrowding. The most-visited museum in the world, and an absolute must-visit according to every Paris guidebook you’ll ever read, the Louvre has struggled to accommodate a 25% increase in visitors from 2017 to 2018, which saw 10.2 million total visitors.

The museum has responded by deciding to hire more staff members, and also switch to time-sensitive ticket reservations, which must be purchased in advance, in order to disperse the number of visitors at peak times. Ultimately, the “proactive crowd management strategy” brought visitor numbers down, according to the Louvre, from one million to 800,000 per month in the summer months of 2019. “We are not looking to welcome more visitors, but to welcome them better,” said Jean-Luc Martinez, president and director of the Louvre.

Paris welcomes close to 40 million tourists per year, and has struggled over the last decade to protect itself from the negative effects of excessive tourism. In 2019, the mayor announced that he planned to ban tour buses from the city, after a driver was hit and killed by a tour bus without a license to operate in Paris. Buses would have to park in designated areas just outside city center, because of the traffic and pollution they cause.

But automobile congestion is far from the only issue Paris faces. Airbnb has made it easier to visit by providing a cheaper alternative to hotels. There’s evidence the company’s presence has begun to price out locals, clearing space for more tourists. Since 2015, real estate prices in the city have jumped nearly 25 percent, according to the INSEE national statistics office.

Instagram culture has caused visitors to spend longer in clogged areas (sometimes in traffic) while photographers and influencers struggle to get the perfect picture. Attractive storefronts suffer particularly: come for the photo, don’t buy the product. Internet guides and travel vlogs have let travelers in on more “hidden gems” in tourist cities, rapidly cycling travel trends into the mainstream. A good example of this is the Pont des Arts, or the “Love Lock Bridge,” where, until 2015, paramours could padlock their affections “forever.” Until the city stripped the 700,000 locks from the bridge, fearing that their combined weight — about the same as 20 elephants — would cause the bridge to collapse.

While the Parisian tourism industry has risen steadily in recent years, it will face its greatest challenge yet when the city hosts the Summer Olympics in 2024. While normally the Olympics are a bone thrown to a city as an alleged guaranteed tourism bump, the Paris Olympics will pose a unique set of issues. Unlike past host cities such as Sochi (Russia), Dakar (Senegal), and Rio de Janeiro (Brazil), Paris already has 95% of the infrastructure needed to host the games, and a tourism industry close to bursting. The city doesn’t need the visitors, nor does it need the industry. But it will still need to overcome the environmental and labor hurdles that come with such a large influx of people.

When it comes to the subject of overcrowding and aggressive tourism, there is always anger on both sides. Tourists don’t mean to harm a country’s environment or infrastructure when they visit. If a traveler chooses to spend her only week off in a year exploring Paris, she’s going to want to see the Mona Lisa and get some good photos in front of the Eiffel Tower. She has no ill intentions. But neither does the mayor trying to keep his city safe, or the resident begging for a little peace of mind.

Everyone will have to make compromises, but they will all be in the service of creating a more enjoyable experience for all the people who play a role in France’s crucial and complex tourism industry.