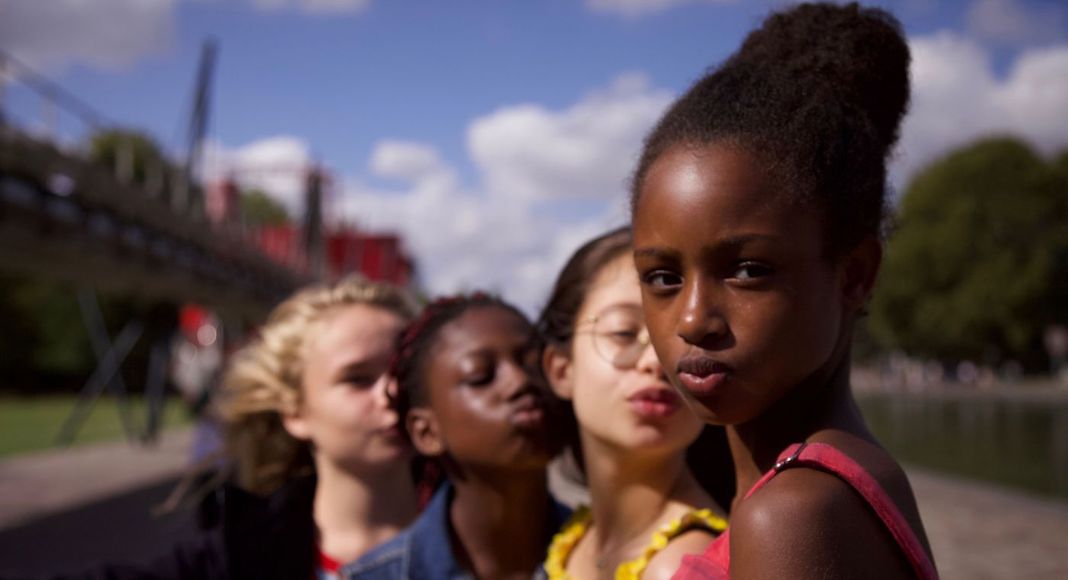 What is ‘Cuties’ Actually About? (And Why Are People So Mad About It?)

“People often ask me about the oppression of women in more traditional societies. And I always ask: But isn’t the objectification of women’s bodies in Western Europe and the United States another kind of oppression? When girls feel so judged at such a young age, how much freedom will they ever truly have in life?”

French-Senegalese director Maïmouna Doucouré took to The Washington Post last week in defense of her film Mignonnes (Cuties, in English), which was released on Netflix earlier this month. The French film received enormous backlash after the platform released the poster and trailer, which contain images of 11-year-old girls dancing and posing provocatively. Protests were signed calling for the film’s removal, Doucouré received death threats, and conservative American politicians like Ted Cruz demanded an investigation into whether or not Netflix had violated child pornography laws.

But what exactly is everyone so riled up about? Some girls pouting with their hands on their hips, or twerking in shiny spandex?

This is a breakdown of the “sexual” content in Cuties, explained within context of the film’s intentions (to our best efforts). Some of it will be uncomfortable to read, just as it was to watch.

Cuties starts by introducing us to Amy, an 11-year-old girl from a conservative Muslim family, who has just moved to a new neighborhood in Paris. At a prayer circle, an older woman urges the women to be pious, because they are “precious” in the eyes of Allah, and, “Because in hell, [women] will be much more numerous than men.” Scantily-clad women of course are blamed for the problems of the world.

Amy sees another girl who lives in her housing project, Angie, dancing in the laundry room, and finds out that Angie and her friends, the tween Mean Girls of her new school, have formed an ad hoc dance crew in order to enter into a local competition. The girls, the titular ‘Cuties,’ bully Amy, dumping her backpack in the trash and pushing her into the boys bathroom, telling her to take a photograph of a boy’s penis while he’s urinating.

This is followed by moments of childish play that seem almost exaggeratedly innocent, like Amy and Angie bouncing on a pink princess bed and stuffing their faces with Haribo, or the girls sneaking into a laser tag arcade. But moments later, Angie is showing Amy a dance video on YouTube that ends with an unedited nip slip, or the girls are dancing in front of two security guards in order to make them uncomfortable enough to let them off the hook for trespassing.

After being told she has a flat butt (because, of course, she hasn’t hit puberty yet), Amy finds herself staring at the behinds of women in her building, and watching music videos of women dancing in lingerie. This leads to a decidedly uncomfortable scene in which Amy teaches the girls how to twerk from videos she’s seen online.

When Amy makes her entrance to the school later on, in vinyl leggings and the smallest of crop tops (with different hair, to show her character development), it reminds you that these clothes don’t just come from nowhere. Whereas before, Amy was wearing her little brother’s shrunken shirt as a “crop top,” these clothes came from a store that sold them in her size.

But the most horrifying moment in the movie is one that seems to come somewhat out of nowhere. Caught with her adult cousin’s stolen phone, Amy uses it to publish a photograph of her vagina to social media, in a move so out of left field that the other girls stop talking to her, saying that she has given them “a bad reputation.” Though there is no actual nudity shown, the idea of the photograph is haunting. If any of the conservatives complaining about the film actually watched it, this might be the instance to take the most outrage at, if only because it distracts from the main plotline.

At this point, the movie veers on changing genres, with something of a psychological thriller to it. In the following scene, right before the big competition, Amy, dressed and ready despite having been taken off the team, pushes an unsuspecting Yasmine into the Seine. It’s a dark moment, as you realize that the flailing Yasmine, who clearly can’t swim, could actually drown… before she latches onto a nearby floating buoy.

These two intense turns, however, only serve as building blocks upon which to construct Amy’s final breakdown, set, of course, in the middle of the big dance competition.

At this point, you see the culmination of the gradual escalation of clothing and dancing throughout the film. Fed by likes on Instagram and deep dives into the Internet, what starts as pretty run-of-the-mill dance class fare morphs into routines where the girls slap their own butts and stick fingers in their mouths. But it’s less the moves themselves than the intention behind them that curdles the stomach. They have become comfortable with the dances, and the attitude that comes with them. They really mean it. Which is why the horrified reaction of the audience and jury at the competition serves Amy’s distorted reflection right back to her, causing her to run offstage in tears.

The movie shows that children growing up today know that sex can be a powerful tool… even if they don’t necessarily know what it is. A post-Me Too film about adolescent sexuality is very different than one that might have been made even a few years ago. The girls know that they have the power to make adults uncomfortable, to ruin their lives, even, by dressing and acting in a certain way, as when they accuse a security guard of being a pedophile in front of his colleague. They know that anonymous browsers on the Internet will engage and encourage them.

The greatest fear of parents in the early aughts was that their naive children would be taken advantage of online. Now, children live online, and they’re not as naive as we like to pretend. When Doucouré was making this film, she interviewed more than a hundred 10- and 11-year-old girls living in Paris about their experiences, and even among the child actors in the movie, she had heard similar tales.

Dancing has acted as a scapegoat for the moral decline of youth throughout history. Think of Footloose. Think of Elvis. Think of the Jitterbug. Even the waltz was, at one point in time, considered lewd and improper. Children tend to start ballet classes around the age of four. And as cute as they might be, staggering about the stage, they’re probably wearing either a nude leotard, or something tight, shiny, and covered in spangles.

Consider, for example, the reality TV show Toddlers & Tiaras, in which children barely old enough to stand on their own get full cosmetic treatment and parade onstage to be judged by adults on their beauty and charm. Does a five-year-old cage dancer seem particularly appropriate to you? Well, according to the judges, little Ava is an absolute rockstar.

Think about every pop star who’s been groomed to perform stylized teen sexuality, only to be signed and rushed to market the second they hit eighteen: Kesha, Britney Spears, Miley Cyrus. Or the teen drama stars in their mid-twenties advertising sex and scandal on Gossip Girl or Riverdale.

Sexualized media is packaged and marketed towards young audiences every day, whether or not it technically contains any underage participants. Which is why it needs to be discussed instead of cancelled. Cuties might not be a perfect film, but it is a nuanced exploration of female adolescence, with a strong moral backbone. So you should watch before critiquing, lest you risk not seeing the tweens for the twerking.