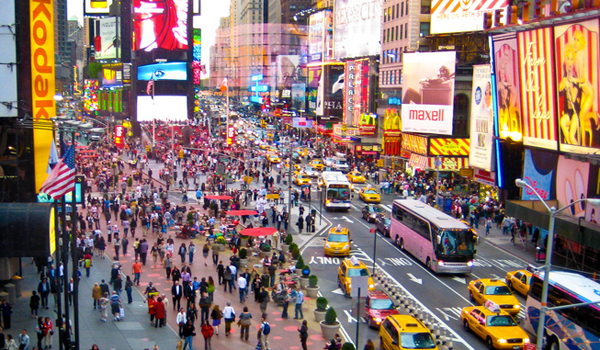 From real Moulin Rouge dancers to Arianespace rockets, there will be something for every francophile at Times Square on September 26th and 27th. It’s the ambitious, colorful Best of France extravaganza with over 200 exhibits and hundreds of thousands of visitors are expected to flood the center of Manhattan to get their French on.

“In terms of attendance, we’re pretty confident,” says Rod Kukurudz who shares responsibility for the production of the event with his wife Sandrine. “Times Suware attracts huge crowds of visitors, and contrary to popular belief the vast majority of them are Americans. That’s the reason we chose this location: you can reach the entire country from one spot.”

What will they see? The regions, industries, and artisan entrepreneurs of France, all on hand to show America what they have to offer. The goal of the organizing committee, presided over by Paul Bensabat, is to pull off “the biggest event in the world dedicated to France ever organized abroad.”

Sound a little overwhelming? Don’t worry: the event is highly organized, with a layout of several “villages” based on theme stretching from the north of Times Square all along Broadway. Hundreds of volunteers are needed — anyone interested is strongly encouraged to sign up here ASAP.

The centerpiece will be a stage where several performing artists will be featured. “There will be opera singers and DJs, and even an Edith Piaf impersonator,” says Rod Kukurudz. And of course, 16 dancers straight from Moulin Rouge who will be making their New York debut.

Along Broadway you’ll be able to discover the “Rendez-vous en France” area, dedicated to tourism. Regions like Midi-Pyrénées, Normandie, Ile-de-France, Rhône-Alpes, Aquitaine, Guadeloupe et Martinique will be represented alongside certain larger cities like Paris, Lyon and Marseilles. Discover their charms in the Big Apple and you just might feel like hopping on a plane!

Next you’ll find the beauty and fashion area, organized around a huge cat walk. French designers will be showing their collections in ten-minute shows throughout the festival, with a finale that promises to steal the show: a children’s fashion show presented by the Zannier group. Think your child could rock the catwalk? Organizers are looking for kids ages 5-7 to model their styles for Best of France. Email [email protected] for more info.

Visitors will also encounter a “French Tech Village” with about 15 start-ups, an art and culture space, a living history space, and of course a space dedicated to food where master chefs from France will be cooking up regional specialties.

The event will kick off at 10am on September 26th and will last until Sunday evening. The French minister of foreign affairs Luarent Fabius will launch the festival on Friday night during an inaugural soirée and there are rumors that François Hollande himself may make an appearance.