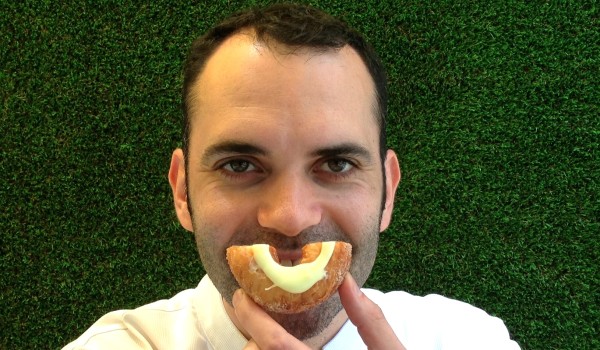 Two years after it burst onto the baked goods scene, the Cronut is still a pastry rock star. In fact, the lingering obsession for chef Dominique Ansel’s creme-filled doughnut/croissant hybrid is somewhat unsettling.

“Each morning there are 100-150 people lining up. It’s not slowing down,” says Ansel, who fans the flames of hysteria by producing a limited quantity of Cronuts daily and a new exclusive flavor each month. The 400 he produces invariably sell out by 10am.

But don’t go to his new outpost — Dominique Ansel Kitchen — if you’re looking for the pastry that put him on the map: his new bakery and café that will open next week in the West Village on 7th Ave is a new beginning for the French chef.

Here you’ll find a concept that’s very of-the-moment: DAK (the restaurant’s official nickname) will have 25 seats inside and 25 more outside, with plenty of room on the sidewalk to wait in line. The space will be organized “like an amphitheater” with a huge kitchen in the middle where people can watch their mousse au chocolate “being made.”

“The idea is to let people enter the kitchen, to be part of the show,” explains Ansel. Between six and ten pastry chefs will be at work, preparing a lemon tart or putting the finishing touches on a millefeuille.

So what can you order? The menu aims at originality, offering a chocolate mousse “for which you can choose the amount of chocolate.” There will also be a take on the buttery Breton delicacy the kouign-amann, a warm brownie with sage leaves, matcha  doughnuts, an almond croissant with a touch of lavender, a ham-boursin-prosciutto croissant, an egg sandwich with squid ink, and a baked “grilled cheese” sandwich.

DAK will also have a have a more classic, reservations-only restaurant-style space where Ansel will serve a tasting menu with 8 deserts on a theme that will change twice a year.

If you’re looking for more Cronuts, you’d better head to Tokyo: there, Ansel is preparing to open a new bakery next month. He is about to spend a month there training the team that will be tasked with providing Cronuts to the local population. “The Japanese are really into French pastry and we’re expecting a huge success,” says Ansel.