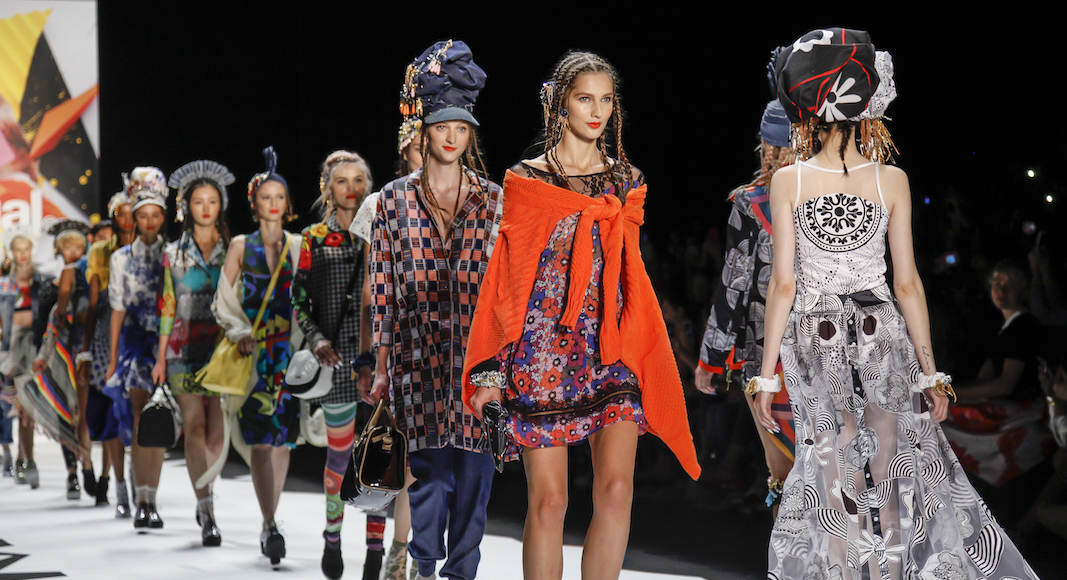 Paris Fashion Week, which typically draws thousands to the City of Lights every summer, is just one of the many large-scale casualties of the COVID-19 pandemic. Though known for its big-budget runway shows, industry parties, and street style scoping, this year, fashion houses were forced to adapt their shows for their Fall/Winter 2020/21 lines.

Nature was at the forefront of many collections, as were not-so-subtle allusions to fairytales and fantasy. Dior, instead of presenting a traditional runway show, produced a 10-minute video straight out of your 5th grade obsession with Greek mythology. Ambassadors from the Maison Dior, dressed like toy soldiers, wheel a dollhouse version of the Maison filled with doll-size dresses through an enchanted forest, dressing nymphs, mermaids, dryads, Narcissus, and even a statue of Venus.

Giambattista Valli’s characteristically lush and all-frills video was cut with nature videos shot in Paris, drawing comparisons between the dresses and birds swimming through water, voluminous thunderclouds, and even bugs crawling up sheer curtains. And at the start of Ralph & Russo’s collection video, Tamara Ralph explained that, “We wanted to look at the environment, as well as travel in itself… so we looked into the Seven Wonders of the World.”

Rahul Mishra’s papillon-studded collection, featuring artfully masked models, opens with a quote by Hans Christian Anderson “‘Just living is not enough,’ said the butterfly. ‘One must have sunshine, freedom, and a little flower.’” He asks the inevitable question one must ask while watching these collections, which is, in essence, what use do we have for luxuries such as couture when so many worldwide are struggling financially? Instead of posing it as an issue of consumption, he holds couture up as a way of employment for the craftsmen and artisans who painstakingly create each and every dress as an individual work of art. “We all need to embrace nature. Every garment needs to have purpose for its existence in this world.”

Brands made sure to highlight the detailed work of these seamstresses, also featuring closeups of their handiwork in the videos of Dior and Ralph & Russo. Back in March, many of them banded together in Paris to form Tissuni, a collective making cloth masks out of spare fabric and distributing them freely among doctors, nurses, police officers, and firemen. Important work, but in a very different context from how Mishra referred to it, and a critical example of the current debate in fashion between utility and art. It’s not a new one: in the 1920s, Coco Chanel’s sleek, simple styles became enormously popular in part because the designs were easy and affordable to mimic. In between two World Wars and the Great Depression, utility became fashionable. It wasn’t until after World War II that Dior’s “New Look,” with its large skirts requiring yards and yards of expensive fabric, became popular as a symbol of economic prosperity, an excuse for wastefulness.

But for the most part, the major fashion houses seem more inclined towards fantastical escapism than practicality this year, perhaps because more time alone means more time to dream, or perhaps even that it necessitates it.

Some houses decided, instead of the usual 1:1 or 1:2 model-to-dress ratio, to have one model showcase every outfit in the collection. For Giambattista Valli, it was Joan Smalls; for Maurizio Galante, Amalia Vairelli. Chanel’s video, clocking in 30 looks in less than 1.5 minutes, is a dazzling series of flashes, outfits changing so fast you barely have time to see them, let alone to realize that they are all worn by two women: Rianne Van Rompaey and Adut Akech.

Schiaparelli went above and beyond conceptually, if not production-wise, in a 3.5-minute video of Artistic Director Daniel Roseberry sketching couture ideas in Washington Square Park, by the end of which not a single dress has been seen in real life. When you view the collection on their website, you are still shown only the sketches, with a notice to Contact us for more information.

For Julian Fournié, videos were never going to be enough. Leaning into the concept of “exclusivity” in couture, his video made the bold announcement that he will not only be offering private showings to couture customers, but that he will travel anywhere in the world to organize a personal fitting.

It is unclear when fashion shows will reemerge in their former splendor, but as of now, Paris Fashion Week is set to pick up again with live shows at the end of September. For the meantime, designers will have to rely on online sales, but with no big events to shop for, even the most devout couture die-hards may not be so eager to pick up their credit card.