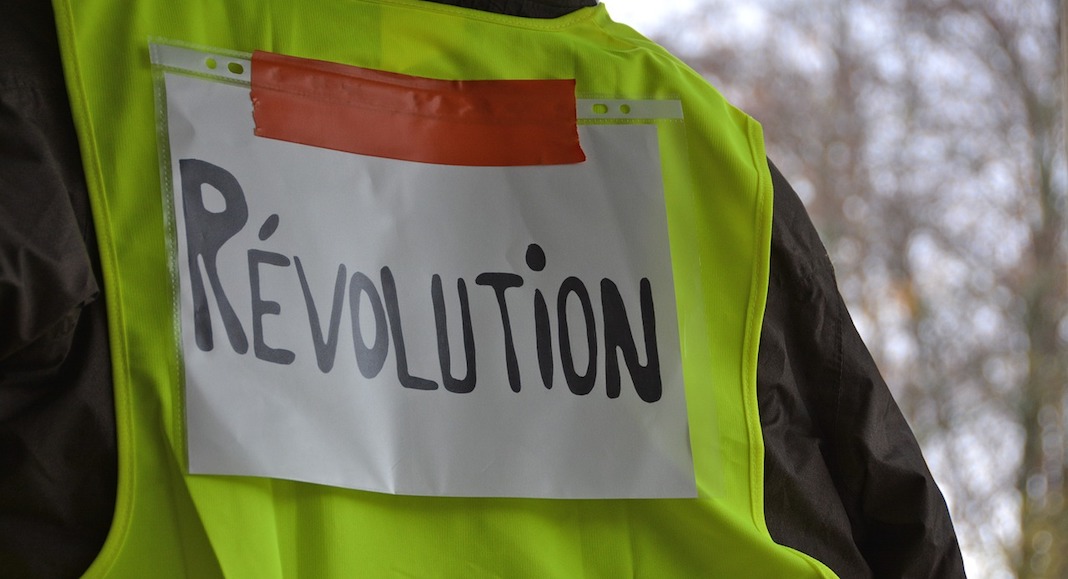 Could a Gilets Jaunes Movement Happen in the US?

In the United States, political commentators may be tempted to compare the gilets jaunes (yellow jackets) to other spontaneous movements, such as the Tea Party or Occupy Wall Street. Born under Barack Obama, these two phenomena were reactions to the size of the federal deficit and the widening inequalities in American society, respectively. Are these comparisons justified? Could a movement similar to the gilets jaunes emerge in the US? We spoke to Julien Talpin, researcher at the CNRS of the University of Lille and specialist in political engagement among the working classes in France and the United States.

Frenchly: Does the comparison between the gilets jaunes and the Tea Party or Occupy Wall Street seem justified to you?

Julien Talpin: There are similar elements between the Tea Party and the gilets jaunes, such as the mobilization around tax issues and the horizontal nature of the movement, with significant use of the internet. There is also a form of mistrust towards intermediate bodies and elites. After that, there are many differences. Starting with the sociology of the movement, while the Tea Party had a populist dimension, there were also many people from the upper-middle classes.

The second element of difference is the relationship with religious institutions. The religious connection was very strong in the case of the Tea Party, in particular with the Evangelical Church. Due to the French secular tradition and the historical absence of the church in mobilizations in France, this link does not exist among the gilets jaunes. There’s actually the feeling of needing an even stronger rejection of any intermediation by the church. The equivalent of the Evangelical Church in France could have been the trade unions. However, we see a very strong distrust towards them.

Finally, the Tea Party was strongly conservative. For gilets jaunes, this connection is not clear. The emerging demands show rather a left-wing focus on reducing inequalities and strengthening public services. In both cases, taxation is criticized, but in France, it’s for a demand for better public services. To describe the gilets jaunes as an anti-tax movement would be wrong. Rather, the movement is about better tax equality.

As for Occupy Wall Street, the link is even less obvious than with the Tea Party because those in Occupy were more from the left-wing upper intellectual classes. But in both cases, there is a very strong democratic aspiration, and a refusal to have any leader.

It is interesting to see that some American conservatives like Charlie Kirk use gilets jaunes to defend their ideas when the movement is not, as you said, anti-socialist or anti-tax…

This may be because the gilets jaunes movement was initially presented as something anti-tax. The French left was itself quite suspicious. As time went on, this changed. Eric Brunet, a left-wing journalist from RMC Info, was initially very pro-gilets jaunes. But he moved away from it because he realized that it didn’t correspond to his ideas.

The success of openly socialist candidates in the American elections shows the growing rejection of social inequalities in the US. Could gilets jaunes be exported to the United States?

I read a recent interview with Mark Zuckerberg, Facebook’s CEO, who was talking about transforming the algorithm to highlight Facebook groups. He justified this with a desire to reconnect with public life, particularly in rural and semi-urban areas. This algorithm played a role in the mobilization of the gilets jaunes, which first formed in Facebook groups. These technical elements could contribute to the emergence of a similar movement in the United States.

There is also a comparable structural dimension: a deep sense of injustice among the working classes in France and the United States, and more broadly in the rest of the world. This is embodied in different ways in each country countries (Podemos in Spain, 5 Star in Italy…).

Nevertheless, the contexts are very different. There’s also a different relationship to collective mobilization. In France, the gilets jaunes do not come from the most politically disconnected fractions of the working classes. These are French people who vote, especially for the Front National, or who abstain from voting. But they are not depoliticized. In this respect, it is interesting to note that the suburbs, where distrust towards collective action is stronger, are absent from the movement.

The accession through collective protest that emerged from the workers’ movement, and which still exists among some of the French working classes, makes this kind of demonstration possible in France. In the United States, the history of the workers’ movement is different. The feeling of injustice is not manifested through collective action, but rather at the ballot box, as demonstrated by the electoral gains for the progressive faction of the Democratic Party in the mid-term elections.

What can gilets jaunes learn from movements like Occupy Wall Street or the Tea Party to help get their message across?

These two movements show that a stronger form of organization is needed to have political influence. Spontaneity and lack of organization are not sustainable in the medium term. This was one of the limitations attributed to Occupy Wall Street and Nuit Debout, whose demands remained largely unanswered. The gilets jaunes are gradually realizing this and are starting to organize themselves; there are spokespersons, general and popular assemblies… However, it can be said that the Tea Party and Occupy had an electoral impact despite the absence of structures. Bernie Sanders’ success in 2016 echoes Occupy. And the weakened power of the Tea Party (after it joined the Republican Party) did not keep Donald Trump from being elected president.