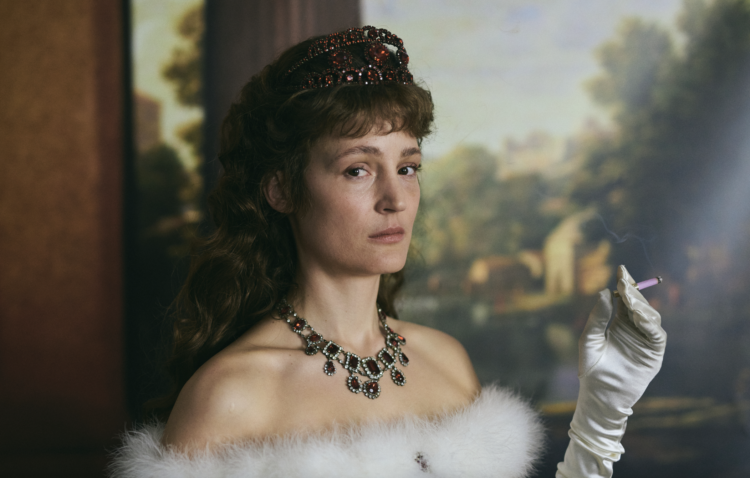 The empress is pissed. She’s turning 40 and, like a light being switched off and leaving a room in darkness, suddenly no one cares what she thinks—or does or wants—anymore. Corsage, Austrian director Marie Kreutzer’s explosive biopic of Empress Elisabeth of Austria (in German, French, English and Hungarian) dives headfirst into this anger.

It’s 1877. When we meet the empress—also Duchess of Bavaria and Queen of Hungary— played by the inimitable Vicky Krieps, she’s seeing how long she can hold her breath underwater in the bath, testing how much control she can exert over her body, her life, and time. Once dried off, her cascading locks carefully arranged on top of her head, she has a maid lace her corset—corsage en français—tighter and tighter and tighter, then measure her alarmingly thin waist. Disappointed with the result, the empress dismisses the girl and replaces her with another who will lace it even tighter.

Dolled up in gown and crown, she exits a carriage with her husband, the Emperor Franz Joseph (Florian Teichtmeister), the guests of honor at a ceremony at a museum that vibrates with pomp and circumstance. When the empress is presented to a group of dignitaries, one mentions that his wife’s heard she’s been struggling with her weight. “These tabloids are a veritable plague,” he says. The next remarks how wonderful it is to meet her in person. He’s well acquainted with her portraits, of course, but in Vienna she’s considered a phantom. 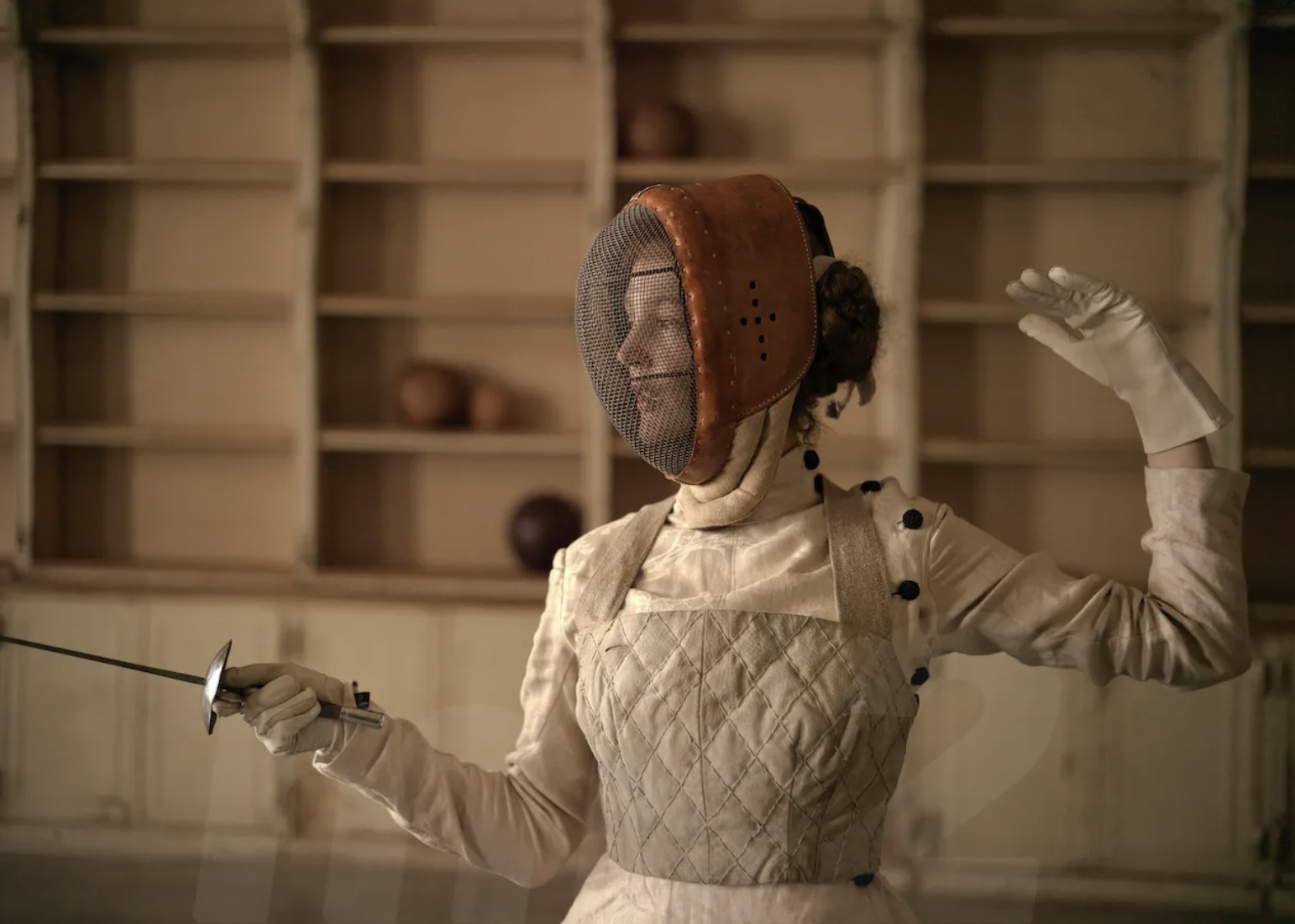 As Elizabeth—also known as Sissi—returns to the palace, she’s filmed in gentle slow-mo, the mistress of the house escorted by her ladies in waiting and devoted dogs, the voice of the contemporary French pop chanteuse Camille crooning an eerie melody, She Was (à la chapelle): “She was/When she was home/She was a swan/When she was out she was a tiger/And a tiger in the wild is not tied to anyone.” In her comfort zone once again, clutching her skirts like the star of a hipster period music video, the empress looks directly into the camera, her gaze inscrutable. There’s confidence, surely, arrogance, a touch of disdain. Is she sneering? Possible. She’s the empress, after all.

Dining with a favorite cousin, Ludwig, King of Bavaria (Manuel Rubey), young, handsome, the person with whom she can be herself, she demonstrates how to faint on command, as if that’s what had happened back there in front of that museum, that crowd, those Important Men. Those assholes pissed her off, she longed to escape their company. Is that really what happened? Or was it that she subsists on nothing but broth and razor-thin orange slices and can barely breathe in the corset that so beautifully shows off her miniscule waist.

This is the life of Empress Elisabeth, as portrayed by force of nature Vicky Krieps (Hold Me Tight, Phantom Thread), who won the award for best performance for the film in Un Certain Regard at Cannes, and directed by Austrian director, Marie Kreutzer (The Ground Beneath My Feet). This empress is famous for her beauty, which she feels slipping away, along with her duties, which now consist of basically just showing up. When she tries to talk politics with her husband, he dismisses her. At her 40th birthday dinner, her guests sing, “Long May She Live,” but it’s clear from the look on her face: As a woman, at 40, her life may as well be over. 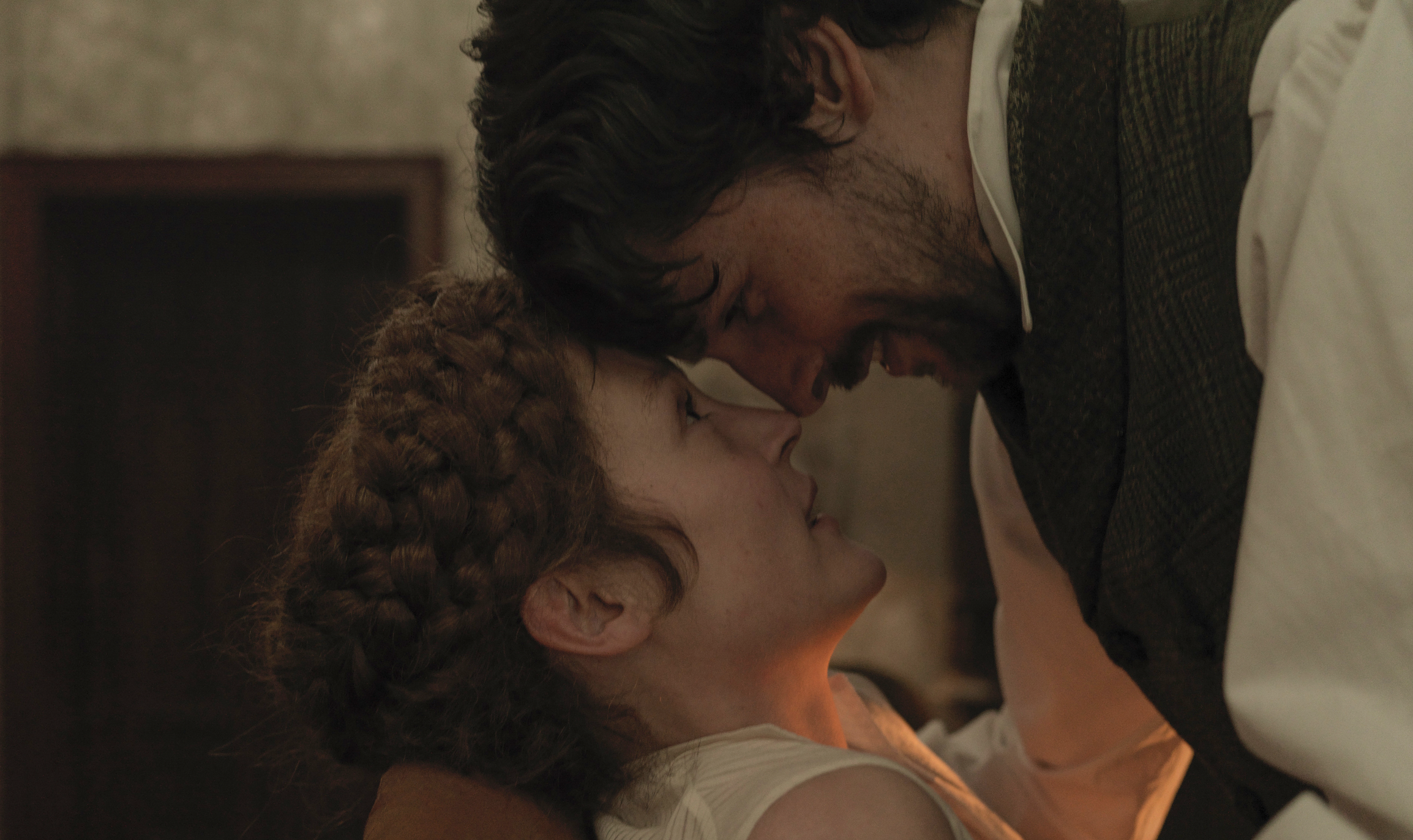 With nothing in her calendar except a chorus line of grim public appearances, she cooks up a plan to rekindle some zest for life. She works off aggression riding (sidesaddle, of course), fencing, and performing superhero-caliber strength exercises. She weighs herself compulsively. She impulsively travels, first to England, then Bavaria, flirting with her handsome riding instructor, swimming with Ludwig in the night, desperately seeking connection and purpose.

Many of the film’s details are grounded in historical fact, including Elisabeth’s obsession with her weight and the fact that she often covered her face with a veil later in life. But the character onscreen is the fierce, irreverent, brilliant creation of two modern women, director and star. This “Sissy” is impetuous, self-obsessed, restless, and cruel. She’s howling a primal scream at the moon. She’s flipping the world the finger—and also sometimes her husband and a table full of stuffed shirts whose opinions she simply doesn’t give a shit about anymore. In the vein of Sofia Coppola’s Marie Antoinette and the Hulu series The Great, the production design and electrifying soundtrack help the director and her star in their efforts. At an impromptu garden party, a harpist strums a haunting version of the Rolling Stones’ As Tears Go By. Kreutzer and Krieps have stuffed a thoroughly modern woman with a big brain and enough wit, desire, disenchantment and anger to power a rocket into a straightjacket masquerading as a corset in a period piece that subverts genre conventions, transforming this lonely historical figure into a rebel and a badass.

After a bout of misbehavior, Elisabeth invites her husband into her room, throws her covers off, revealing her nakedness, and says, “Come over here. You can stop being angry with me.” Also: “I have nothing to hold onto except myself and that takes an enormous effort.”

On one of her escapades, she encounters a photographer who asks to film her with a motion picture camera. Delighted with this contraption no one’s heard of yet, she poses and prances in the countryside, asks, “I can say what I want as long as I smile?” then shouts, howls, laughs for the camera. In moments like these, she is more than the petty, self-obsessed counter of calories, more than the insecure queen whose life purpose is to be perceived as beautiful, the impetuous thrower of tantrums, the occasionally delinquent mother, the destroyer of egos and dreams. She’s often horrible, but we understand: she’s rebelling against the role she’s been forced to play, a role too cramped and controlled to contain her fire. Seeing her dance for the camera makes you wonder what would happen if she were born in another time, what kind of life she might have lived if this trapped bird were able to break free of its cage and allowed to soar.

Another woman struggling to be heard is the writer Annie Ernaux in The Super 8 Years, a film compiled of home movies shot by her husband, Philippe, between 1972 and 1981. Directed by her son, David Ernaux-Briot, and written and narrated by Ernaux, the Nobel Laureate and author of such works as her memoir Les Années (The Years) and the autobiographical novel, l’Événement (Happening), the film tells a story at once personal and universal, in its exploration of the social conventions surrounding marriage, family, and a woman’s place.

After premiering in the Directors’ Fortnight section at Cannes, the film did a festival run that included a recent screening at the New York Film Festival. 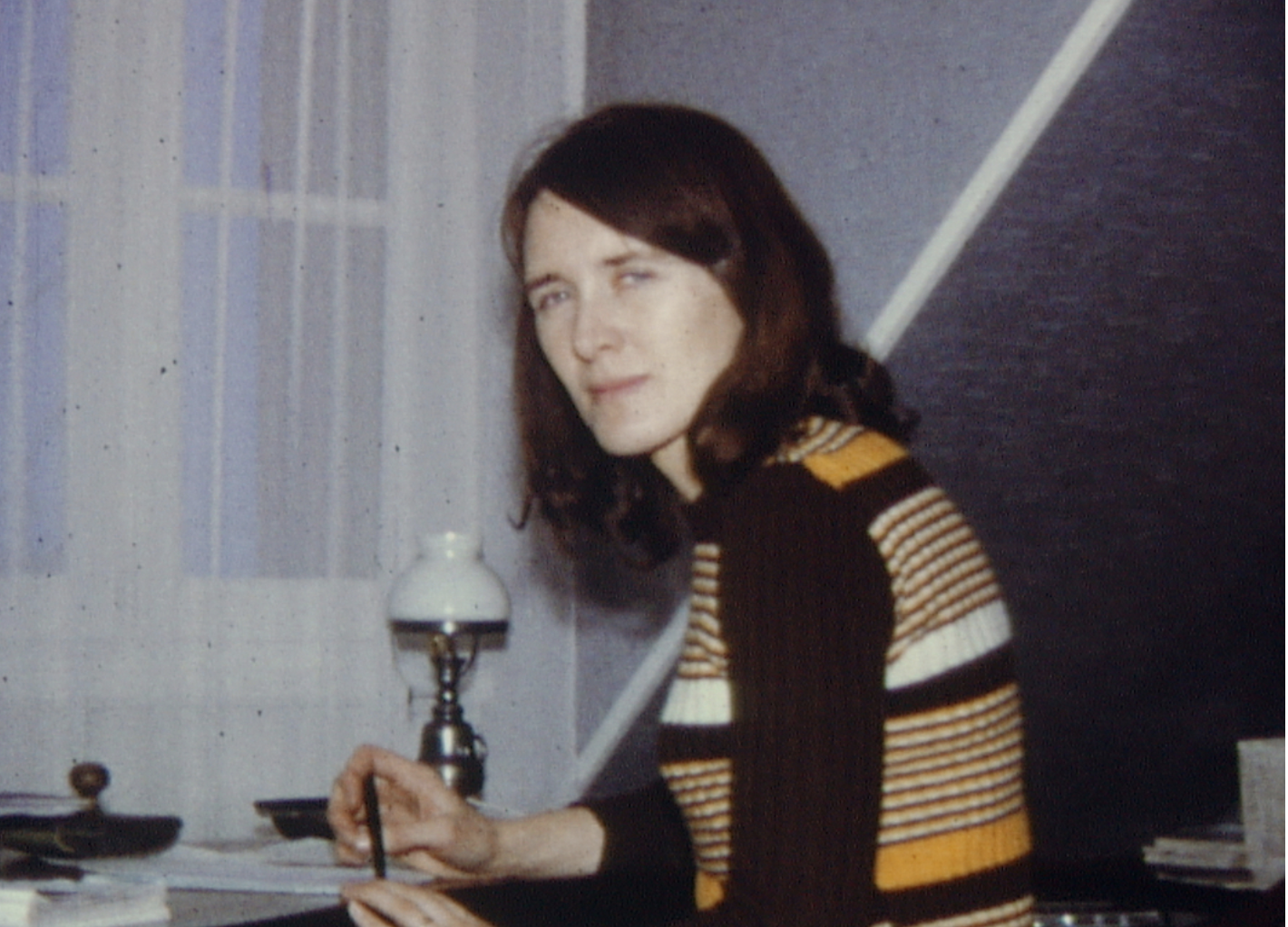 When we first glimpse Ernaux, she’s entering her home clutching a cardboard box. She turns away from the camera, forces a strange, inscrutable smile, more self-conscious than happy. As her two sons goof around, Ernaux explains in voiceover, “At the end of winter, 1972, we bought a Bell & Howell Super 8 camera.” Her husband shot all of their home movies, because the camera was expensive and she was afraid of breaking it, but also because of “the gender-based division of labor established at the start of our life together.”

The significance to be gleaned from the film lies in the distance between the woman we see in the images, a young mother and wife in her 30s, and the celebrated writer she’s become, now in her 80s, who narrates the film. It is here that we find resonance and meaning. “Behind the image of the nondescript young mother,” she says of her younger self, “I can’t help but remember a woman secretly tormented by the need to write.

During this period, the family traveled frequently. We see footage of their adventures in Chile, Albania, Morocco, and Russian and on the ski slopes of France. Other images are more banal: the perfunctory Christmas tree shot, kids opening presents and holding them up to the camera, hugging their cat. But our interest lies in what is not shown, the family dynamics that Ernaux dissects for us looking back at her life then from the perspective of her life now.

“In the scenes of Christmas 1972,” she says, “beneath the feverish, wonder-struck opening of toys…beneath all this, I now perceive a different reality, one of afternoons when I don’t teach and I secretly write a novel… secretly, because I can’t tell my husband, my mother even less.”

Watching now, we know that she did write. She both lived these scenes, suffused with love, longing, sadness, and nostalgia, and she wrote about them. Over images of a family trip to Germany, Ernaux says of her younger self, “She is 33 and doesn’t yet know,” that the manuscript she recently submitted will be “published as ‘Cleaned Out,’” her 1974 debut novel.

One interesting aspect of the home movies is that they were silent. In the making of The Super 8 Years, the filmmakers added music and sound effects—birds chirping, the engines of an airplane. Ernaux points out that words are necessary to give meaning to these “snippets of family life invisibly recorded inside the history of the era.” And so the woman Ernaux has become, after a full life and successful career putting words on the page, shapes this story for her audience. She controls the narrative here and in her many other written works, a luxury that Empress Elisabeth of Austria never had.

Corsage will be released exclusively in theaters on December 23.

The Super 8 Years opened in theaters New York on December 17. 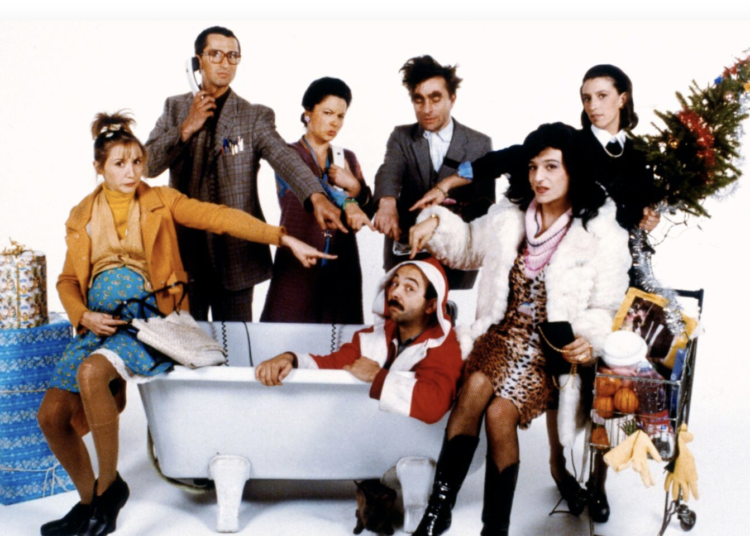 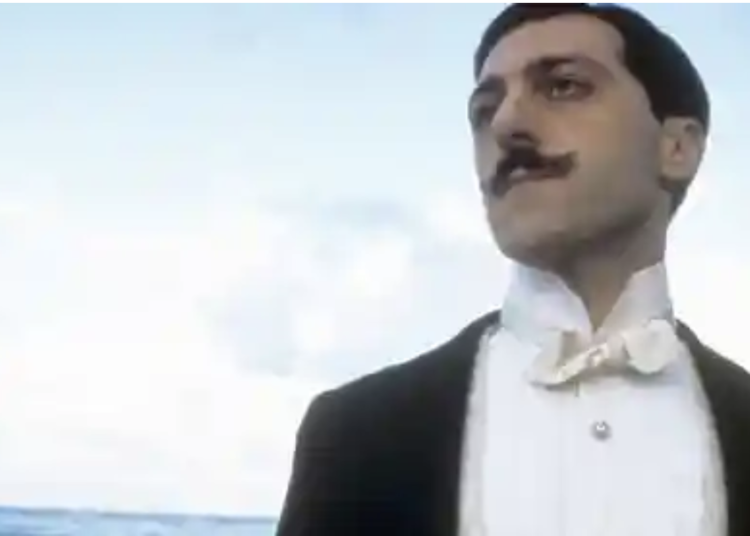 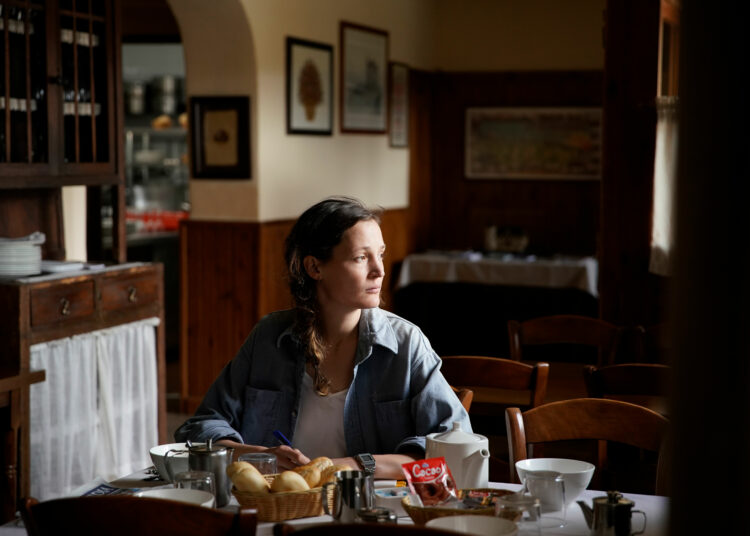