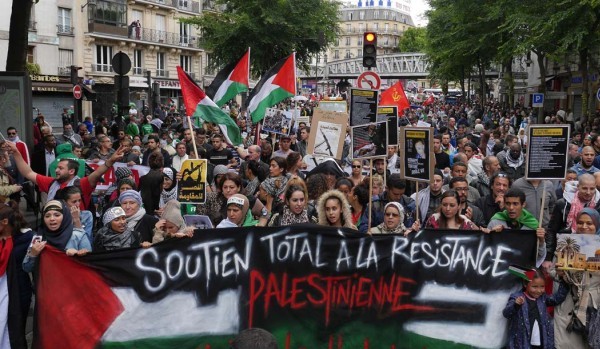 The war between Israel and Hamas from the murder of three Israeli boys in the West Bank on June 12th to the staggering civilian body count in Gaza is front page news around the world. France is no exception of course, and news from each side has been followed closely with protests — something the French are particularly good at. Although such forms of expression are mostly non-violent, the intense political and religious nature of the Israel-Hamas conflict has caused recent demonstrations to deteriorate. Here is a run-down of how the conflict has played out in France.

July 13th- In Paris, a protest deteriorated into violence as Pro-Palestinian demonstrators rioted outside the Synagogue de la Roquette in Paris while almost 200 Jews were inside, too afraid to exit. (Watch footage here.)

Following this incident, both President François Hollande and Prime Minister Manuel Valls made announcements assuring that France wouldn’t stand for anti-semitism. “The Israeli-Palestinian conflict cannot be imported here,” Hollande said, “There cannot be effects or overflow of intrusion or the intention of intrusion into places of worship, like synagogues as happened yesterday, but I would say the same thing for mosques, churches, and temples. Anti-semitism cannot be used because there is a conflict between Israel and Palestine.”

Jews in France — and across Europe — were already on edge since the anti-semitic terrorist shooting at the Jewish Museum in Brussels, on May 24th. For many, the blatantly anti-semitic rhetoric expressed by many participants in pro-Palestinian marches and the vandalism of Jewish-owned shops only heightened an already elevated sense of insecurity.

July 19th- Peaceful demonstrations took place in Strasbourg, Lyons, Avignon and Marseille to show support for the Palestinians in Gaza. In Paris, however, the Interior Minister Bernard Cazeneuve banned the demonstration planned for July 19th because of the the violence that had broken out in front of Synagogue de la Roquette just a week earlier. Despite this ban, Palestinian sympathizers protested in the Parisian neighborhood of Barbès. The protest, which began peacefully, quickly turned violent when the police came to shut them down. 44 protestors were arrested and 17 police officers injured.

July 23rd- Initially reluctant to authorize another Pro-Palestinian demonstration, the French government allowed a peaceful march to take place in Paris, strategically requiring the event’s organizers–the National Collective for A Just Peace Between Israelis and Palestinians–to modify the route so as to avoid areas where violence could break out like synagogues. Marching from Denfert-Rochereau to the center of Paris, the protesters dispersed peacefully.