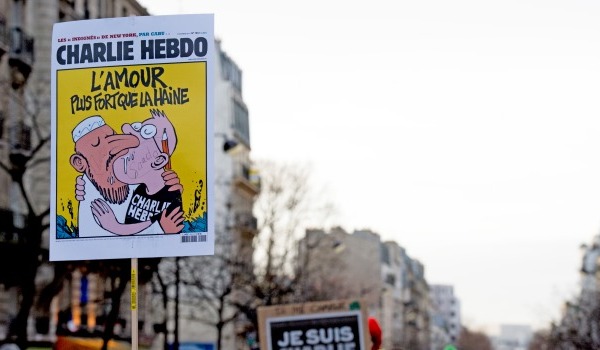 Charlie Hebdo Supporters and Detractors Spar Ahead of PEN Award

It was three months ago that the world became suddenly, painfully aware of Charlie Hebdo when employees at the paper were slaughtered by two gunmen during an editorial meeting. Now a move by six authors to withdraw from the gala honoring Charlie Hebdo at the PEN World Voices literature festival shows that the satirical weekly is as controversial as ever.

Charlie Hebdo editor-in-chief Gérard Biard and essayist Jean-Baptiste Thoret, who weren’t in the building at the time of the attacks, will be accepting the  Freedom of Expression and Courage award before some 800 other writers, editors and literary professionals at the PEN gala tomorrow evening at New York’s Museum of Natural History.

But the decision to honor Charlie Hebdo prompted writers Peter Carey, Michael Ondaatje, Francine Prose, Teju Cole, Rachel Kushner and Taiye Selasi to decline to participate in the gala. The New York Times reports that Kushner wrote to PEN organizers about her decision citing the paper’s “cultural intolerance,” while Peter Carey referred to the “cultural arrogance of the French nation, which does not recognize its moral obligation to a large and disempowered segment of their population.”

In The Guardian, Francine Prose wrote a piece whose title says it all, “I admire Charlie Hebdo‘s courage. But it does not deserve a PEN award.” On April 30th, Prose told NPR that she had been joined by nearly 150 authors in signing an open letter denouncing PEN’s decision to honor Charlie Hebdo with the award.

In response, Charlie Hebdo supporters have come forward in praise of PEN’s decision. In The New Yorker, Adam Gopnick explains why “PEN has every right to honor Charlie Hebdo,” a view echoed in The Nation and also in Slate where Russian-American journalist Masha Gessen says “we, the writers of PEN can’t do much to protect our colleagues from murderous rage, but we can show that we’re paying attention by giving them a prize for the courage they so demonstrate every day.”

.@JohnTheLeftist @NickCohen4 The award will be given. PEN is holding firm. Just 6 pussies. Six Authors in Search of a bit of Character.

Rushdie, who has been the target of a fatwa since the publication of his novel Satanic Verses, is also a former president of PEN. The Guardian reports that in a letter of support for the organization, Rushdie countered the argument that Charlie Hebdo sought to offend France’s disadvantaged Muslim population, saying instead they were fighting “the battle against fanatical Islam, which is highly organised, well funded, and which seeks to terrify us all, Muslims as well as non Muslims, into a cowed silence.”

You can join the debate in person: as part of the PEN festival, Gérard Biard and Jean-Baptiste Thoret will be at a free conference on freedom of expression at NYU on May 5th before the gala.