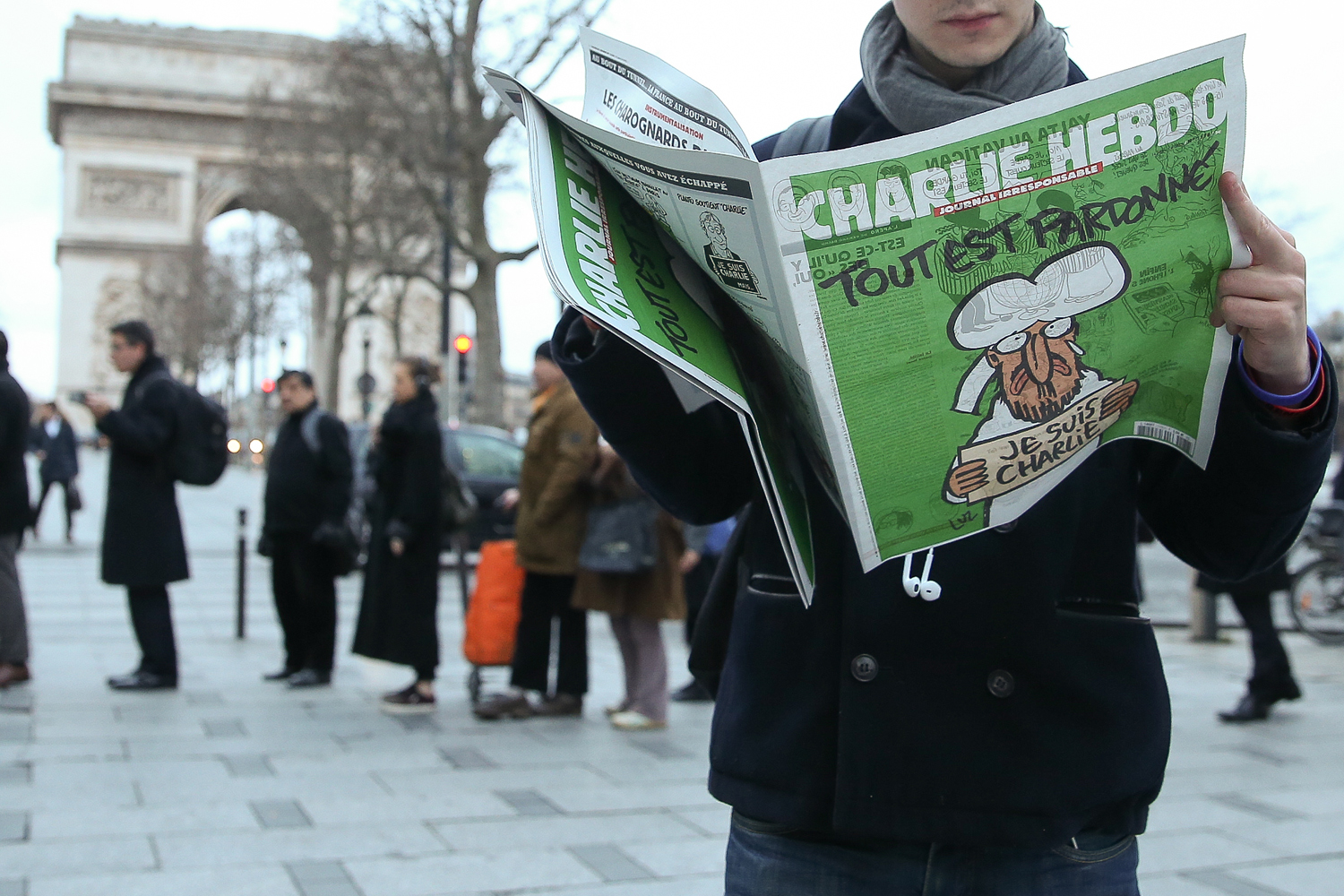 Charlie Hebdo, A Year After The Attacks

Today marks the anniversary of the shooting at the offices of satirical French weekly Charlie Hebdo, a terrorist attack that set off three days of attacks in the city of Paris that ultimately left 17 people dead and 22 wounded.

After the attacks on the 7th, 8th, and 9th, marches took place throughout France, with a national unity rally that marched from Place de la République to Place de la Nation that saw some two million people protesting the attacks, commemorating the victims, and participating in the largest public rally France had seen since World War II.

Just a week after the attack, the remaining staffers rallied to publish a “survivors’ issue” featuring a cover illustration by Luz of the prophet Muhammad holding a “Je Suis Charlie” sign, with a headline that read, “All is forgiven.” The issue had a print run of nearly eight million copies, a big increase from Hebdo‘s usual run of 30-40,000 copies.

“The queues have stretched everywhere,” a newsstand owner told The Daily Mail, “but lots and lots of people are disappointed.” Within minutes of going on sale, the issue had disappeared from Parisian newsstands—completely sold out.Even without the windfall such a large run brought them—quick math puts the receipts safely above the €20 million mark—publishers and publications were already lining up to help Hebdo with funds. The Guardian Media Group, as well as the French Press And Pluralism Fund and Digital Innovation Press Fund, donated more than $400,000 to the publication; all told, they had received $4.4 million in donations from 84 countries by December of 2015—all of which the magazine gave to the French government for distribution among the victims and families affected by all three attacks in January.

But long before that, and even as sentiment for Charlie Hebdo was as shored up as it had ever been, detractors began to appear. Henri Roussel, a contributor during the first iteration of the satirical paper, wrote in l’Obsthat Stéphane Charbonnier—Charb to readers—had “dragg[ed] the team into overdoing it.”

“You can respond to a drawing or word without declaring war or physically eliminating your detractors,” Stéphane Charbonnier told the filmmakers behind Je Suis Charlie years before dying in the attacks that elicited such a comment from the Pope.

Some wounds healed more quickly than others—Riss began drawing left-handed as he recovered in a hospital, his right shoulder blade shattered by the gunmens’ bullets. The remaining staffers reconvened in lawyer Richard Malka’s house, then moved to the safety of the Libération offices.

“The program today is the same as yesterday,” Luz said. “First, we hug each other.”

“It’s very strange,” Gérard Biard, Charlie Hebdo‘s editor-in-chief said. “The need to touch was there very soon after, and for quite a while, we needed to touch each other.”

But the sudden attention, the sudden financial ultra-solvency, on top of unspeakable trauma, led to dissension among the ranks.

“When I left the hospital,” Riss told the New York Times, “I thought naïvely that we would all go back to working together as before. I had no idea that there would be so much chaos.”

With stakes in the magazine then split between Sourisseau and the financial director, Éric Portheault, some staffers believed they should give up their financial interests in the company, turning it into something approaching a cooperative. Fifteen Hebdo staffers signed an open letter to that effect in Le Monde in March. Lawyers were hired in an attempt to unionize the staffers.

In May, writer Zineb El Rhazoui was reportedly brought into a meeting with management to “remind her of her minimum obligations towards her employer following number incidents,” none of which were explained, according to France 24.

“My husband lost his job because jihadists unveiled his workplace, he had to leave Morocco,” she told Le Monde. “I have been threatened, I live in friends’ guestrooms or hotels, and management plans to fire me… Bravo,Charlie.”

Meanwhile, Luz announced plans to leave the magazine. “Each issue is torture because the others are gone,” he told Libération. “Spending sleepless nights summoning the dead, wondering what Charb, Cabu, Honoré, Tignous would have done is exhausting,”

In June, the Riss and Portheault formally agreed to reinvest all of 2015’s profits back into the weekly, with 70% dedicated to the same in the future.

In September, Renald “Luz” Luzier left the magazine. By October, Patrick Pelloux, a columnist and emergency physician who had been one of the first first-responders on the scene of the January attacks, announced his plans to leave in November.

That same month, Charlie Hebdo had vacated its makeshift accommodations at Libération for a new office in an undisclosed location in the 13th, outfitted with nearly two million dollars worth of security features, including a newsroom fortified with bulletproof windows, safety doors, and even a panic room. The offices are under 24-hour protection by the police.

In November, religious extremists associated with Daesh carried out a series of attacks on public spaces in Paris, killing 130 people and injuring 368 more. It seemed as if the terrorists had learned that attacking Charlie Hebdo hadn’t killed the magazine, perhaps in a way that drone strikes haven’t killed Islamic fundamental ideology. Turns out killing people doesn’t do much except kill people.

Malka cuts in: “They’re the ones who don’t think much. Behind them are guys who think a little deeper. Actions are always preceded by words.”

“It’s like those fanatics in the 30s who joined the Brownshirts. They suddenly felt they had this extraordinary destiny,” Riss continues, “but they were just hateful idiots.”

The Vatican’s daily newspaper called it “blasphemous,” and all seemed right in the world.