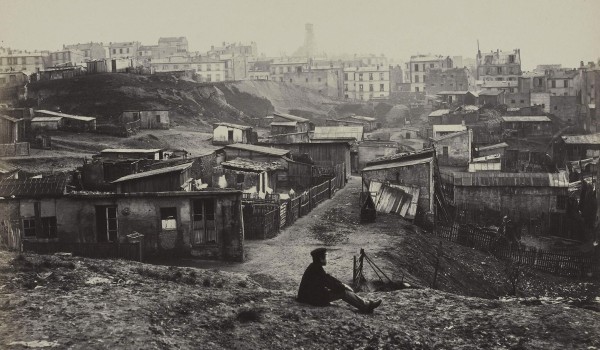 Before Cartier-Bresson, Brassaï, Kertész and all the photographers who lost their hearts to Paris, there was Charles Marville.

A quotation by Victor Hugo adorns the wall adjacent the photographer’s debut Met exhibit, “To err is human; to loaf is Parisian.” And loaf through the streets of Old Paris is exactly what the museum invites visitors to do with a selection of about 100 photographs taken during the time of Napoleon III. The exhibit commemorates the bicentennial of the birth of Charles Marville, once the official photographer of the city of Paris. Marville (who allegedly changed his name from Charles-François Bossu –  French for “hunchback” – following the appearance of the book The Hunchback of Notre-Dame) combed the capital to document the transformation of a city undergoing a modernization program headed by Baron Haussmann.

“Marville had the dual task of capturing what was there and what was about to disappear,” explains Jeff Rosenheim, curator of the Metropolitan Museum’s Department of Photographs.  Visitors are thus able to see the creation of the Bois de Boulogne and the Avenue de l’Opéra alongside all the charming little corners of the city that were sacrificed in the name of this radical urban program.  For instance, one can see the medieval columns of the old market at Les Halles; the leather workers laboring at the edge of the Bièvre River (which has since been buried under concrete for sanitary reasons); as well as a host of small businesses nestled in the narrow streets and passageways soon to be to be demolished.  The photographs reveal the extent to which the city was battered during this period.  “Certain photographs look like war images,” states Jeff Rosenheim.

“Marville demonstrates a brilliant understanding of the patina of the city, and of the significance of the historical period in which he is working,” comments Rosenheim on the photographer’s talents.  “He was not only intent on documenting history, but also on leaving his mark,” analyses Sarah Kennel, curator of the exhibit.  “He captured the complexity of a city that was undergoing unbelievable transformations.”

The works also show Marville’s exceptional skill as a photographer with a level of detail that was rarely captured at that time.  In most of the shots of Old Paris, for instance, the streets are deserted.  This is not a sort of artistic license on the part of the photographer, but rather due to long exposure times — sometimes lasting around fifteen minutes — which made it impossible to capture people’s movements in the images.

The exhibit culminates with a series of images that show the new urban décor that was installed including urinals, kiosks and the city of lights’ lampposts, of which Haussman installed no less than 20,000.  A photograph is on display that was taken on the outskirts of the 20th arrondissement, and which provoked speculation about Marville’s political concerns regarding the social consequences of the transformation of Paris.  A critic in 1870 said that Marville’s work describes Paris as a tale of two cities, “different and hostile; the city of luxury, surrounded by the city of misery.”

Visitors can extend their leisurely Parisian stroll through time at the exhibit in the adjacent galleries, “Paris as Muse: Photography, 1840s-1930s.”  This installation features a selection of some 40 images from the first 100 years of photography in Paris.  It includes works by Eugène Atget (which are compared to three of Marville’s photos), Gustave Le Gray, Man Ray, André Kertész, Henri Cartier-Bresson, and Brassaï, whose images reveal Paris by night.