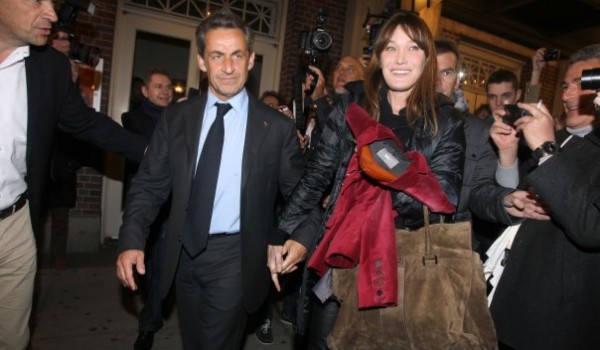 When Carla Bruni-Sarkozy finished her set at the NYC Town Hall, thunderous applause followed her off stage. But the former first lady of France and her husband the former French president were feeling the love as soon as the evening began.

Nicolas Sarkozy, who came as a spectator, was swarmed upon arrival by a crowd of supporters.  “We miss you,” “Come back!” his fans cried out.  Flanked by two body guards, he slowly made his way through the narrow aisles of the concert hall.  He did the routine hand-shaking, picture-taking and asked his admirers where they were from, both in English and French.

As expected, he did not speak to the handful of journalists present about any issues: not his return to politics, and not even about his meeting with Hillary Clinton at the Clinton Global Initiative, although he had mare sure to tweet a photo from the event.  Before going backstage, he simply stated “how lucky” he was to see his wife perform.

In front of a crowd of mostly French fans, Carla Bruni-Sarkozy performed songs from her repertoire, including tracks from her latest album Little French Songs, as well as from her first album Quelqu’un m’a dit, which sold over two million copies worldwide.  With her well-known voice of an angel, she also sang “Douce France” in Italian — a nod to her heritage.  She crooned about her nostalgia for the 70s with the song “Chez Keith et Anita,” in which she imagines herself alongside Keith Richards, the drummer of the Rolling Stones, and his partner Anita Pallenberg.

With her characteristic joie de vivre,  Bruni-Sarkozi kept the evening light and fun, telling appreciative fans that she hates being called madame – “I will not be called ‘Dame’ before I die” – and performing the song “Raymond,” dedicated to her husband.  “I changed his name.  His name isn’t Raymond, but he’s a lot like Raymond,” joked the singer.

As the former First Couple left Town Hall they both signed autographs, and were accompanied by Louis Sarkozy (only son of Cécilia Attias and the former president).  Next stop for the Sarkozys: Los Angeles on April 26.