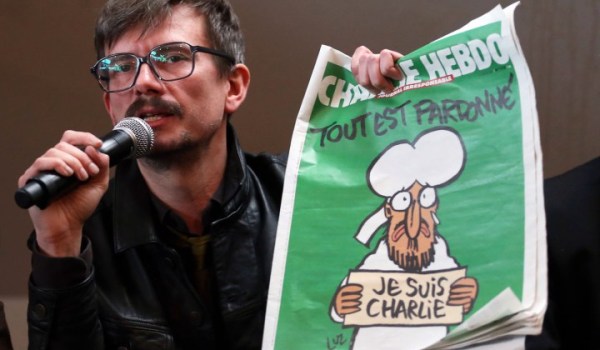 Where (and When) You Can get Charlie Hebdo in the US

(UPDATED with appli) Early this morning French newsstands were already emptied of copies of the new edition of Charlie Hebdo — in the US there were no newsstands to empty. Like everywhere else in the world, whether from curiosity or solidarity, there is a high demand for the latest edition of the weekly satirical magazine that just a few weeks a go was relatively unknown. Best-case scenario, US distributers may have copies within a few days.

The paper’s regular distributer (the same one, incidentally, as the rest of the French press in North America) is Montreal-based LMPI. It wasn’t able to get ahold of more than 1500 copies, which will for the most part remain in Quebec. “We will be able to send a total of 300 to the US, of which 100 will go to New York,” explained Sylvain Fournier of LMPI who think that allowing for travel from France, these copies will be on sale on Friday.

Other than huge French demand, the North American distribution network is also suffering from the fact that it hasn’t distributed Charlie Hebdo recently. “We were only selling between 30 and 40 copies in Canada and we weren’t selling any in the US, so we had stopped carrying them for lack of demand,” explains Fournier.

Here at French Morning, we are launching our own “Operation Charlie” in response to dozens of email and phone inquiries about where to get a copy. Transportation often being the main difficulty in distributing foreign press overseas, we reached out to Air France and La Compagnie who immediately donated transportation for any copies we could gather.

Now it’s a question of getting the copies to transport. With the help of Unipresse — an organization dedicated to promoting the French press overseas and which ordinarily deals with subscriptions rather than the sale of individual copies — we should be able to get ahold of a few hundred copies before the end of the week.  “Our priority is to make a maximum number of copies available free of charge for consolation in as many locations as possible, in a spirit of defense of freedom of expression,” explains Catherine Lamy, East Coast representative for Unipresse in the US.

As for Charlie Hebdo, which has had bigger fish to fry in the last days, they’ve given assurances that demand will be met. “There will be 4 million copies printed over the next few day and as many reprints as necessary,” explains Christophe Thévenet, lawyer and Secretary General of the organization Friends of Charlie Hebdo.

Given the limited capacity of French printers and especially distributors, the production of these papers will still take several days. But as soon as they become available in Paris we will scoop them up onto a flight bound for the US. A list of places to buy them will be published on French Morning as soon as we have that information. You can use the form below if you’re anxious to have the information by email. Of course, money from the sales goes to Charlie Hebdo directly.

In the mean time, anyone wanting to read the new Charlie Hebdo can check out the digital edition, available now on  iphone et ipad, Android or Windows Phone. So far it’s only in French, but an update with the translation into English, Spanish, and Arabic, is expected soon.