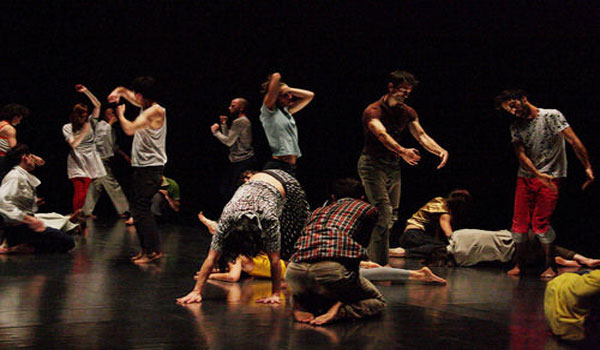 Boris Charmatz: Dancing at the MoMa

Director of Rennes and Brittany National Choreographic Center in France, which he renamed Musée de la Danse, he is thrilled to be presenting his works, usually performed in small spaces, in the museum’s spacious Marron Atrium, galleries, lobby and garden. Like many experimental choreographers, he eschews traditional theaters. The dancers will literally be everywhere. “Dance is a fluid medium,” he says, “and it’s exciting to give the them a chance to move at will. I think of it as in invasion of dance. You won’t know where they will be, except for the sound of the ghetto blasters they will carry for their music.”
Not that he didn’t create specific concepts for the works. For the first section, “20 Dancers for the XX Century,” twenty dancers of all ages will perform solo works associated with great modern and postmodern dancers, choreographers, and performance artists of the last century. After conferring with colleagues in Europe and in the United States, among them Yvonne Rainer, Simone Forti, William Forsythe and Ralph Lemon, he selected performers who could most closely relate to those from the past, among them Richard Move and Valda Setterfield. “It’s a mixture of history and improvisation,” he says, “a mash up of movements.” Open to more than the usual icons, he includes Charlie Chaplin’s little final dance in “Modern Times.”

In the second section, “Levée des Conflits Extended/Suspension of Conflicts Extended,” twenty-four dancers continuously perform 25 movements, always leaving out one gesture. “It’s almost trance-like,” Charmatz says, “with some of the pieces looking more like sculpture than dance.” Finally, in the third part, “Flip Book,” he refers to David Vaughan’s 1997 book “Fifty Years,” which charts Merce Cunningham’s choreography over half a century. Charmatz chose six dancers to warm up, rehearse and perform in the Marron Atrium over a period of several hours, all the while interacting with the audience. “I hope viewers will stay with us, as if they were learning the movements themselves,” he says. “I hope for a dialogue.”