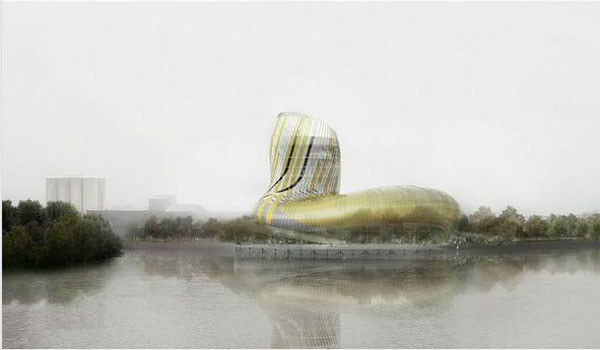 Bordeaux’s Cité of Wine: Raise a Glass with the Influential Oenophiles

Wine lovers of the world, Bordeaux wants YOU! The French city famous for wine is undertaking a project called the Cité of Wine Civilizations (Cité des civilisations du vin). “Neither a museum nor a theme park,” the website explains, the Cité is “a unique project” — and one that is looking for your support.

What better way to celebrate the Cité than by savoring wine? The American Friends of the Cité des Civilisations du Vin (AFCCV) is inviting supporters to raise a glass at the United Nations on April 30th. Bordeaux mayor Alain Juppé  — who has made the Cité a pet project of his tenure — will be on hand to meet dozens of ambassadors, emphasizing the international scope of the project. Oenophiles willing to shell out $650 per person will be able to taste 50 wines from around the world from the classic wine-producing locales as well as more exotic ones including China, India and Ethiopia.

George Sape is the president of the AFCCV. An American lawyer, he is an avid collector and connoisseur of wine who says he has “always had a weakness for French wine.” He didn’t fall in love with the taste in France, though. It was in Boulder, Colorado in the 60s. “At the time there it was mostly either beer or beer. But I had a good friend whose father sold wine — the only place in Boulder you could get French wine. Then I discovered that women liked wine and so we started a club where every Friday evening we’d go for a picnic dressed in tuxedos with good wine, which was always French.”

Then, he was sent to France for the State Department. “That’s where I became a serious wine buyer.” The key word is “serious”: his collection at one time boasted as many as 25,000 bottles. “It’s gone down since. At some point you have to drink it. I don’t want to die with my bottles…”

Throughout his years of collecting, George Sape has been faithful to his first love with the majority of his collection containing French wine “and a few American wines.” Nevertheless, it’s the international aspect of the Bordeaux Cité that inspired him to get involved. “Wine has become a world affair with more than 80 countries producing wine today. The Cité des Civilisations du Vin will be the first institution in the world dedicated to this culture that is shared by so many people.”

The design of the building itself, by architects Anouk Legendre and Nicolas Desmazières (Agence XTU) is inspired by the shape of a carafe and will cost an estimated 77 million Euro to build. Scheduled to open in 2016, it will host exhibits and events “that will be windows on the world of wine,” says Sape, “a world America has been involved in for 30 years, so it is essential that Americans get involved and help out.”

Sape hopes to gather several hundred Americans at the UN on April 30th to begin raising money. “After all, the US has become the biggest wine consumer country in the world,” thanks in large part to Bordeaux. The board of AFCCV already has about 10 Americans and at the helm alongside Sape is another great Francophile and wine-lover Bob Wilmers, CEO of M&T Bank and owner of the Château Haut-Bailly (appellation Pessac-Léognan) for the last 15 years. Their first objective is to raise one million dollars fort the construction of the Thomas Jefferson auditorium. “Who else [would we name it after]?” says Sape. “He was the first to introduce French wine to the United States. He had discovered it when he was Ambassador to France and he made it the official drink of his inauguration.”