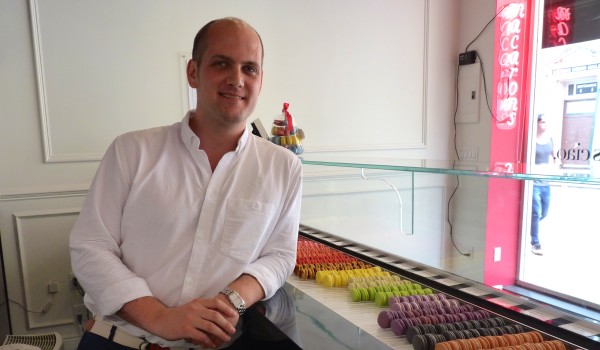 Bisous, Ciao–The Other King of Macarons

“Before hanging up the telephone I always say, ‘bisous ciao.’ My wife, who is American, finds it cute. Which is why Alexandre Warzee, a French man hailing from Valenciennes, decided to give this funny name to his company that makes and sells macarons in New York.

“Another macaron bakery?” you think. Ah yes, but Bisous, Ciao is among the veterans. The first bakery opened at the end of 2010 in the Lower East Side. “At the time, there weren’t very many of us. There was Payard, un Macaron Cafe, and us,” recounts the 32 year old mining engineer who worked as a consultant for Bain in Paris and New York. And who came to the bakery via his wife.

“Macarons have been exploding in New York since the end of 2011, after the arrival of Ladurée,” he continues. Only a few months after the opening of the impossible-to-overlook Upper East Side bakery, Bisous, Ciao opened a second location on Bleecker Street. Like the first, this new location has a zen, clean, and modern ambiance–nothing like the frou-frou of Second Empire de Ladurée. “Right now, we’re looking for a place for a third bakery in midtown. I hope that we will find one between now and September.”

Because yes, New York’s macaron madness isn’t over yet. Since its creation, Bisous, Ciao has seen revenue rise at 40% each year. “We’re approaching a million dollars,” calculates Alexandre Warzee. On weekends, the customers never stop pouring in. “At the end of the week, we can sell up to 1,000 macarons each day in each bakery. There are lots of women, men buying gifts, and tourists. We also see celebrities like James Franco, the Gossip Girl team, and Tyra Banks. Claire Danes came by once for a baby shower.”

Alexandre Warzee also makes macaroons for companies (“with the logos on top”), and big displays. A month ago, he signed an agreement to place his macarons in New York’s five Dean & Deluca locations.

It’s his wife, former baker for Fauchon and Gordon Ramsay, who created the recipes and supervises the baking of the macarons, in a kitchen neighboring the Lower East Side location. From what we tasted, it was clear this was no novice to the art of making macarons… A special mention for the sesame and rose flavors. “Unlike our competitors, we make everything ourselves, by hand,” clarifies Alexandre Warzee. “The products at Ladurée are very good, but they are made on a large scale and then exported frozen. Here, everything is more artisanal, more local. And we never freeze our macarons.”

What if the macaron mania passes, like so many other trends in New York? Alexandre Warzee is calm: the evangelism isn’t over. “We’re far from the end of the road. Even in New York, many Americans don’t know what true French macarons are. When we say “macaron,” they think of macaroons, the spongy coconut cookies. The bubble will be when all of the coffee shops begin to sell them.” When will we start seeing macarons at Starbucks?