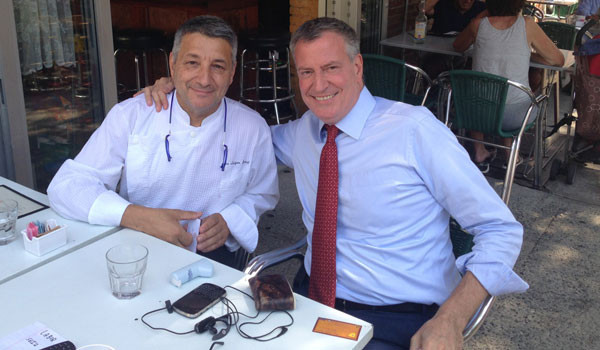 His first visit was unannounced, but Bill de Blasio’s second calling was preceded by a half hour heads up by his deputy.

Twice this week, New York’s mayor has stopped for a long breakfast at Provence en boîte, a French restaurant on Smith Street in Carroll Gardens.

“He spoke to me in French, shares Jean-Jacques Bernat, the restaurant’s owner, and he was surprisingly good at it! I knew he spoke Italian but not French”.

On both occasions, he stayed a few hours, sat outside. “He was with three colleagues and surrounded by half a dozen bodyguards”.

Between the discussions with his colleagues and multiple phone calls, Bill de Blasio also shook hands and took photos with passers by as well as waved at those who were calling out for him from their cars.

The mayor’s order was made up of coffee, a croissant, sausages and scrambled eggs.

A Brooklyn native, the mayor certainly doesn’t shy away from returning to his roots “and sitting at a cafe in the middle of the neighborhood is surely a good way to be seen in his area,”  says Mr Bernat.

On the other hand, local Italian restaurant owners are less happy. Mr de Blasio is of Italian descent.

“They came to the restaurant to ask me why we was choosing to bring his custom to a French restaurant rather than an Italian one” says Provence en Boite’s owner.