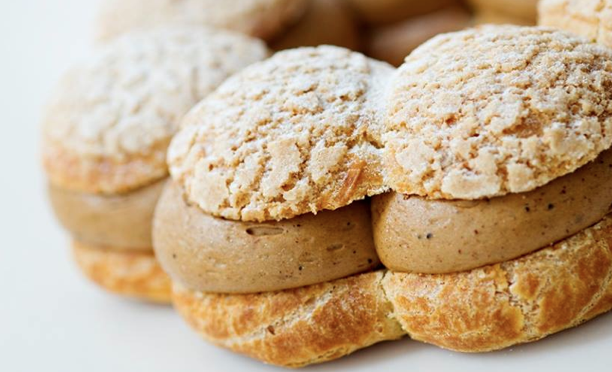 Beyond Brioche: Take a Sweet Trip with the Paris-Brest

Before the cronut, there was another round, wheel-shaped pastry filled with sweet, rich, almond and hazelnut butter cream. But is the Paris-Brest some kind of gourmet doughnut? Pas du tout!, the French would reply. In this month’s Beyond Brioche, hop on your bicycle and discover the classic Paris-Brest pastry.

In the late 19th century in France, riding a bicycle was all the rage, and bicycle races began to pop up here and there. There’s more to French bicycle races than the Tour de France: in 1891, journalist Pierre Giffard came up with the idea for a race that went from Paris to the Brittany seaside city of Brest, and back to Paris again. His newspaper, Le Petit Journal, would cover the race, earning his newspaper and the bicycle industry some healthy publicity.

A few years later, in 1910, Giffard decided to commemorate the race, and asked baker Durand to dream up a pastry to symbolize the race. The Paris-Brest was born…

A fitting homage to the bicycle race, the Paris-Brest is shaped like a wheel tire. It is a plump and chewy tire made of choux pastry – the magic behind chouquettes – and filled with praliné butter cream. Praliné is a heaven-sent creation: sugar, almonds, and hazelnuts ground together into a divine paste that just might be more addictive than Nutella (who knew that was even possible?).

The Paris-Brest, a novelty when it was introduced, has now become a mainstay in bakeries all over the French territory. As a French resident, you may never have gone to Brest, but you have surely taken a bite of this memorable patisserie. The crunchy top, often covered in golden slivered almonds gives way to a buttery smooth cream that leaves a lingering sweet, roasted taste on your taste buds long after you’ve had the last bite.

In the past few years, as the French became newly enamored with their very own pastry classics, the Paris-Brest stepped out from behind the bakery counter and into the spotlight. Celebrity pastry chefs began reinventing the wheel, so to speak, introducing the Paris-Brest in new forms and designs. Philippe Conticini, of La Pâtisserie des Rêves, was one of the first to try his (expert) hand at the 2.0 version of the classic, letting go of the traditional wheel shape in favor of a wreath of round, bouncy choux. The result is a dessert that can easily be shared – to each his choux – and that also looks more neat and clean-cut than some of the original versions.

Across France, these new Paris-Brest have made the rounds, and have even bicycled their way across the Atlantic to Dominique Ansel’s bakery, where a Paris-New York with its chocolate, caramel, and peanut butter filling is available to share.
Back in Paris, where the nouveau classic has become ubiquitous, other star bakers have decided to keep it simple, offering the traditional Paris-Brest to a crowd that has learned to love it once again. Sebastien Gaudard is a good example: in his subway-tile white bakery, the Paris-Brest is a simple wheel of choux pastry that allows the generous praline filling to shine.

Looking for another destination than Brest? Chef Nicolas Tissier of the Comptoir du Médoc has a Paris-Blaignan on his dessert menu, crafted with caramelized hazelnuts from Médoc, that won’t disappoint.

Hop on any bicycle you choose, sweet or sporty – we won’t judge. Your taste buds need some exercise, too.