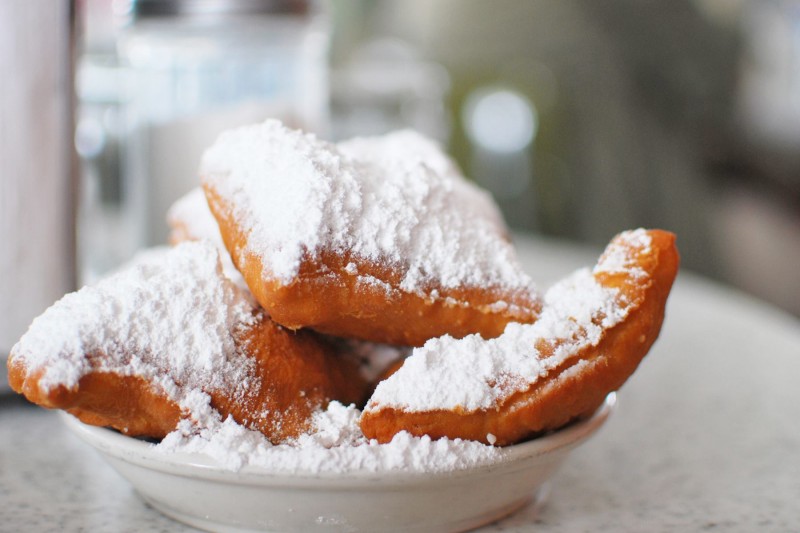 Don’t you dare call them Doughnuts

In the dead of the cold, humid winter, all we crave are satisfying snacks and desserts—it’s not a time for fruit salads. In the United States, we bite into hearty fruit crisps or chocolate tortes; over here, in France, the desire for comfort food strikes just as hard. After January’s hearty, almond-rich galette des rois, in February come Mardi Gras snacks… and by that, we mean deep-fried, fluffy beignets. Move aside, Café du Monde: let’s take a look at the beignet français.

Beignets have been a festive snack throughout ages, in the Greek, Roman empires, as well as in North Africa, where they were doused with sweet honey. In France, the beignet appeared as a pagan-meets-Catholic tradition, quickly becoming a staple during Mardi Gras carnivals. Why beignets, though? The day preceding Ash Wednesday—literally, “Fat Tuesday”—was the final chance to use up any remaining animal fat and eggs in households before the beginning of Lent. As a result, Mardi Gras festivities were replete with crêpes and beignets—and honestly, we’re always up for any excuse to eat something sweet.

As with most culinary traditions in France and elsewhere, Mardi Gras beignets have regional variations, giving you ample reason to try a different city every year. Basic dough recipes can be different, as are resulting names: from bugnes near Lyon to roussettes in Chartres, and more. Since beignets for Mardi Gras have dissociated themselves from Lent in many households and towns, you’ll be able to find warm, fresh beignets all month long—or, if you’re lucky, year-round. Here at Beyond Brioche, we like our beignets light and fluffy, right out of the deep fryer, sprinkled with powdered sugar. Picture Café du Monde’s famed beignet, except lighter, crispier, with less sugar…they don’t quite rival the nutritional benefits of an acai bowl, but we like to call them nearly guilt-free. For those who enjoy a beignet with a denser, chewier texture that’s still light as air, there’s a variation you can’t miss. Pets de nonne, literally “nun’s farts” (really), are fluffy clouds of deep-fried choux pastry dough. Anyone with access to a deep fryer (and basic caution in the kitchen when handling hot oil) can make their own, a pretty simple path to a delicious snack with a name that will make children and grown-ups smile.

Because only having a dozen variations on the Mardi Gras beignet would be too easy, France also associates beignets with a beloved after-school snack. Step into a bakery that, hopefully, bakes its own beignets, and you’ll see something resembling a jam or Nutella-filled doughnut. This is a denser snack than the traditional Mardi Gras beignet, and one is usually enough… whereas we’ve been known to have a handful or two of pets de nonne. Two lines higher, you may have read the word “doughnut.” You read it right: doughnut. Read it again: doughnut. If you’re American, this probably won’t be an issue. If you’re French, we can probably guess your reaction, something along the lines of “Are you kidding? Doughnuts are greasy, heavy and disgusting. Jam-filled beignets are light, fresh, and so much better.”

No, we’re not making this up: in one hundred percent of instances where we’ve brought up American doughnuts with French family, friends, or colleagues and their similarity to beignets, we’ve been met with scoffs, derisive laughter, and full-blown disagreement.

We suspect this is due to the fact that many of them have never had a really good doughnut, but that’s a subject for another day. There is a sort of beignet pride in France. In France, we are proud of how large our panorama of baked goods is, and beignets are like the distant cousin we hear about really often, but who often get the show stolen by the popular kid croissant or the baked choux, more esthetically (and etymologically) pleasing than a religious flatulence.

Sure, they might not be as hip right now, but beignets mean one thing: comfort. They’re like stepping into a pair of sneakers instead of stilettos, a hoodie in lieu of a silk blouse. If you ask us, that sounds like a perfect winter plan.