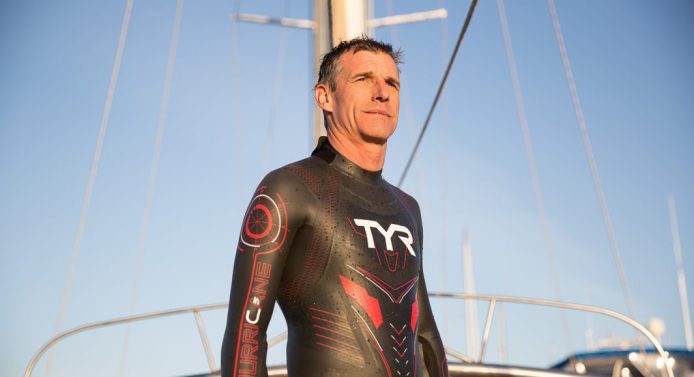 Benoît Lecomte, the man who swam across the Atlantic Ocean in 1998, has set his sights on the Pacific. The journey from Tokyo to San Francisco, approximately 5,500 miles, will take Lecomte six months.

This is not the first time French Morning has met this intrepid, 50-year-old Frenchman based in Austin, TX, who is known to Americans simply as “Ben.” “We started to plan the project five years ago, but it wasn’t simple to put together,” says Lecomte. “The hardest part was finding the boat. After an initial failure with a partner, we realized that in order to be in control we had to find investors. We bought a boat in England. It’s currently on a train to San Diego.”

Lecomte chose to swim west to east to take advantage of the warm currents to propel him while he swims. He’d originally planned to begin swimming this summer, but has been delayed due to bad weather and a robust upcoming typhoon season. The boat will be worked on this summer before heading to Tokyo in the fall, where it will be met by Lecomte and the team in spring 2018 to begin the swim to San Francisco. 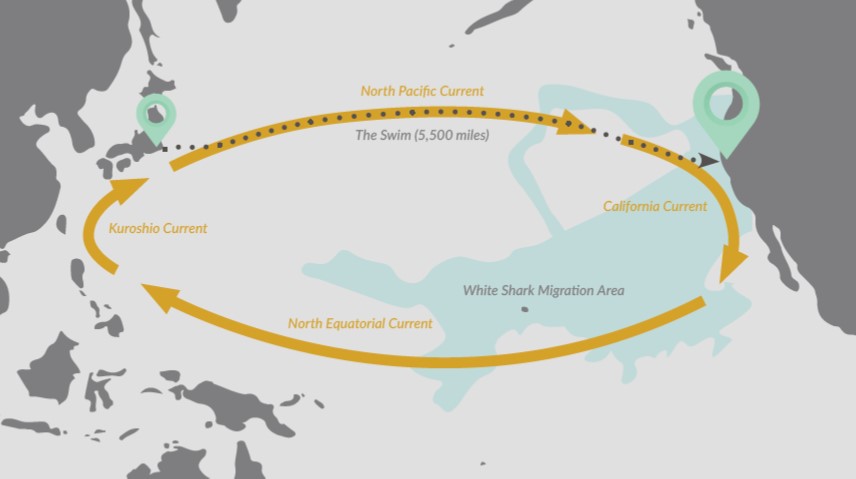 As for setting the record for the longest swim, that’s secondary for Lecomte: “I don’t care about having my name in the record books. What interests me is the media attention this will attract.” Not media attention for himself, but for scientific and environmental objectives. “The main goal of the swim is to attract attention to and educate the public about the negative impact humans have on the oceans. The team onboard the boat will be carrying out research that has never been done over such a long period of time on the open Pacific.”

The boat accompanying him is the Discoverer, a 20-meter sailboat with a team of eight people on board, including a skipper, navigator, videographer, and medic. “They are all volunteers,” says Lecomte. “The environmental aspect of the mission is their primary motive.” Lecomte will also be followed on land by approximately 15 scientists studying eight aspects of the journey (see image on right).

The objective: to swim close to 50km per day in single 8-hour stretches, with pauses for eating and hydrating every half-hour (consuming mainly soups and energy drinks). “It’s too difficult to get back in the water once you’re out.” The rest of the time will be dedicated to recuperation (10 hours of sleep per night), and proper nourishment. In addition to the sailboat, which must keep pace with the swimmer (2.5 knots), a solar-powered Zodiac inflatable boat carrying supplies will remain at his side throughout the swim. Each morning the boat will return to the GPS coordinates where Lecomte stopped swimming the previous night, to ensure the entire distance is covered.

Contrary to popular belief, Lecomte claims the physical effort required is nothing special. “Swimming is much easier on the body than running, which is more harmful because you must carry your weight. Swimming allows for healthy, repetitive motion. In addition, I swim in the sea, and my wetsuit allows me to float. I’m equipped with a snorkel, which eliminates the need for me to lift my head above water. Flippers allow me to use the most powerful muscles in my body for propulsion. My arms are mainly for balance. That said, I am definitely exhausted after eight hours. But I never over-exert myself since I know I’ll have to swim again the next day.”

Ben doesn’t seem too concerned about sharks either. “I don’t want to worry about things I can’t control. I know the sharks are there; it’s their environment.” During his Atlantic crossing, Lecomte was followed for five days straight by a lonely shark.

What he’s most concerned about is boredom. Swimming for eight hours a day for six months, there are sure to be dull moments. In order to prepare for this, Lecomte has prepared a schedule—something for each hour—of subjects to concentrate on, including memories, events to relive, and mind games. “Imagining a city where I’ve never been, for instance. But in each of these mental exercises, I will use the same method for telling all my senses to dissociate my spirit from my body.”

Finally, how did Lecomte start swimming across oceans? “It’s my identity. It’s my way of expressing myself. I communicate through the physical exertion of swimming, and it’s what makes me happy. I feel alive when I work on these kinds of projects.” For Lecomte, it’s no small amount of pleasure. “You go through high highs and low lows, from fatigue to the joy of your surroundings. To swim in the midst of a pod of 50 dolphins is unreal.”

It’s funny that Lecomte—an ocean swimmer—should make his home in Austin. “It’s not the best place for swimming, but I’ve lived here for 26 years. I swim in lakes and rivers, in particular the St. Gabriel River.”

The entire expedition can be followed on the website The Longest Swim and on social media. As well as photos and articles, the boat, equipped with fifteen cameras, will regularly post videos and interviews along the way. The team is in the midst of a crowdfunding campaign to help finance the cost of satellite communication, but that will only cover part of the expedition budget, which totals around $385,000.