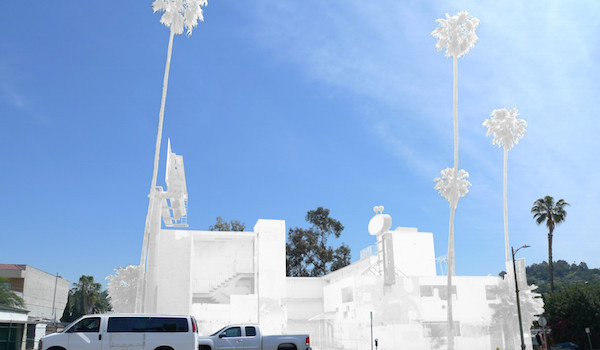 With its raw concrete walls and plywood-covered windows, the Sunset Pacific Motel (nicknamed the “Bates Motel”) already looked pretty ghostly, but apparently not ghostly enough for Vincent Lamouroux. In the coming weeks, the French artist will begin realizing his vision for an ephemeral art installation entitled “Projection,” in the entire building will be covered in white powder.

“I noticed the motel 14 years ago when I was riding through the neighborhood on my bicycle,” Lamouroux, who is based in Paris but lived for a time in Silver Lake, told French Morning,”That’s often a good way to discover hidden aspects of this city that go totally unnoticed when you’re in a car.”

Currently slated for demolition and subsequent development, the long-abandoned Sunset Pacific Motel had become a neighborhood eyesore.  Local residents have come to know the property by its “Bates Motel” nickname, which probably originated from its location at the intersection of Sunset Blvd. and Bates Ave. but most likely stuck thanks to the reference to cinema’s creepiest motel: the Bates Motel of Psycho fame.

“This is an emblematic building that for me embodies the history of the city of Los Angeles,” says Lamouroux, “Motel is a contraction of the words hotel and motor and this kind of building was conceived at a time when driving became an essential characteristic of life in this city,” he explains. “We aren’t going to just cover the motel but also several other elements surrounding it, including a billboard and several palm trees.”

Billboards, palm trees, and derelict buildings are typical of the Los Angeles landscape and rendered together in ghostly white, they should make a clear metaphor for the constant change the city is undergoing. The installation is meant to engage everyone who happens to see it, whether or not they consider themselves art-lovers.

“The work is visible from the street so it may reach a very large number of people,” explains Nicolas Libert, co-founder of the art gallery and concept store “Please Do Not Enter,” which is a partner in the project. “Our store, which sells art, clothing and other objects that are accessible is seeking in the same way to engage a public that is maybe not so familiar with art and came in for something else. We have that in common with Vincent. We’ve worked with him before.”

The owner of the “Bates Motel” is one of the project’s most enthusiastic supporters. “He’s someone who wasn’t familiar with the art world before but was seduced little by little by the installation. Today he’s totally fascinated by the project and had completely appropriated it,” says Libert. Los Angeles Mayor Eric Garcetti — himself a great lover of contemporary art — has supported the project from the beginning. Several surrounding schools are also going to participate in the form of workshops run by Vincent Lamouroux.

“The white paint will create a kind of neutral screen on which each person can project his or her own desires easily. It’s also a way to freeze space and time and to reveal change, to accept the passage of time,” says Lamouroux. A team of painters armed with paint guns will take some ten days to complete the installation, for which an inauguration will take place on April 26th. Though it may sound intriguing to watch, the artist does not wish to reduce the work to a performance piece. “I want to avoid impressing with numbers or quantifying all of this,” says Lamouroux,”My goal is not to create a sensation. I don’t want to give any dates concerning the start of the work: I would prefer for the result to simply come forth, an apparition.”