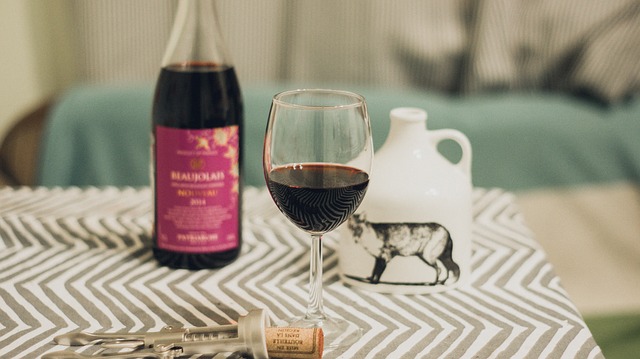 On the third Thursday of every November, France celebrates the arrival of the latest vintage of Beaujolais Nouveau with festivals and fireworks and fanfare. This year’s has been touted by winemakers as one of the best batches in ages, but the country doesn’t seem interested in celebration.

Burgundy wine giant Geoges Duboeuf, whose bottles can reliably be found in wine stores across America, has called this year’s Beaujolais the best vintage in living memory, citing an “extremely early harvest and blazing sunshine throughout the summer,” giving the grapes a “perfect maturity” that may make this Beaujolais a competitor with landmark years like ’47, ’76, ’05, and ’09.

Jean Bourjade, speaking for the wine group Inter-Beaujolais, said, “We had a wet spring, then record sunshine in July when the Rhône region was the hottest in the whole of France.” He called the 2015 Beaujolais Nouveau a “historic vintage.”

But even after Parisiens defiantly return en masse en terrasse, reservations at restaurants are down since last week’s attacks, and orders for the new Beaujolais are half what they would normally be. One Paris hotel had received no reservations for their Beaujolais party.

That hasn’t stopped the rest of the world from celebrating the new vintage, though, some in odd fashion: a wine spa in Japan fêted the new Beaujolais by bathing in it. Across America, wine-lovers were celebrating the arrival of the drink partially responsible for Another Side Of Bob Dylan—Beaujolais was Dylan’s favorite wine during his most prolific period, from 1960-64.

The usual celebrations, which by French law cannot begin until 12:01am on the third Thursday of November, see some 65 million bottles distributed across the globe—almost half of the wine-producing region’s annual output. What started as a local phenomenon became a nationwide event, thanks in part to some expert marketing by Georges DuBoeuf, whose family, it can be assumed, was not always in the wine business.

Beaujolais is, itself, a wine of celebration, originally made to fête the end of the year’s harvest, and only fermented for a few weeks before its release, leaving little in the way of tannins to give red wine drinkers their normal emotional pique. The quality of the vintage is sometimes judged as a herald of the quality and quantity of the harvest throughout the region. Beaujolais—much like famous Russian actor Gérard Depardieu—doesn’t improve with age and is meant to be consumed before the next vintage arrives, with some exceptions. Unfortunately, many Americans are faced with a selection of years-old Beaujolais at their local wine stores and rarely a fresh vintage.

Regardless of the stunted enthusiasm for the new Beaujolais, fifty winemakers from the town that shares its name packed a convoy of Citroëns and personally delivered their latest wine to Paris, hoping to help the city heal itself and continue the slow march back to normality.

“Our hearts are hurting terribly,” Nicolas Decatoire, the boss at Le Gavroche in the 2nd arrondissement, told Agence-France Presse, “but we cannot forget our traditions… we can’t be dictated to by a gang of idiots.”

“Beaujolais isn’t good wine, but everyone will go out on purpose tonight,” Lucienne Tavera, a 63-year-old Parisienne, told the Associated Press. “Tonight, we won’t care how it tastes.”