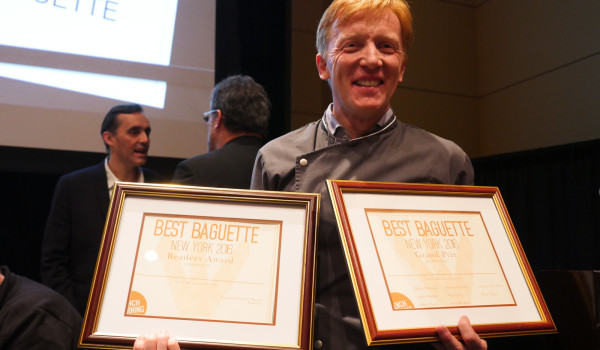 Cheers rang out in the Grand Paris Ballroom of Sofitel New York last night, where gourmands and the lovers of good French breads gathered en masse for the first edition of French Morning’s Baguette Battle, a competition in search of the absolute best baguette in New York City.

Some of those cries of joy came from Clémence Danko and the team at Choc-o-Pain, a New Jersey bakery that won the Audience Award for Best Baguette, given by the 300 people that attended the event. Danko, who has plans to open his third bakery soon in Jersey City, struggled to believe her luck:

The evening’s big winner among the field of fifteen competitors was Maison Kayser, the chain run by dynamic baker Eric Kayser, who scored twice with the Readers’ Choice Award and the Jury Prize, awarded by a panel of expert chefs and experienced foodies.

Epicerie Boulud, represented by baker François Brunet, took home the prize for “most original bread,” while Amy’s Bread and Breads Bakery tied for the Special Jury Prize for their baguettes, putting them just after Kayser in the standings. Upper East Side institution Orwasher’s—which is turning 100 this year—won the jury’s award for Best Specialty Bread, which honored non-baguettes.

Throughout the night, seven judges had the difficult task of deciding the winners of a fiercely contested battle, and they weren’t fooling around at the jury’s round table, expertly set up for a blind taste test that judged each entry on six specific criteria, including flavor and the structure of the baguette.

Contrary to what I thought before coming here, it was very hard to separate the breads. We tasted more than fifteen,” said Ariana Daguin, the founder of D’Artagnan, before announcing the winners. “All the baguettes were of very high quality.” She was joined on the jury by chefs Sara Moultin, Didier Elena, André Soltner and Sylvain Harribey, as well as noted bread expert Charlie Van Hover and food writer Sylvie Bigar.

Making their way from the bakers’ tables to the cheeses and charcuterie, some attendees were less judicial than the jurors. “I judge as much on the personality of the bakers as their bread,” said Kate, a New Yorker who came to the event with her son. “It’s important to see how they get along with customers.”

“I haven’t tasted each of the bakers, but I like to stop and chat—I know the big names but not the smaller bakeries. I really want to give them a chance,” said Chantal.

Anthony Valla, COO of Valrhona USA, already had a favorite: Almondine, one of his DUMBO neighbors. “I work in chocolates, but I dabble with bread. I’m a little biased, but they’re my favorite!” For Nabil, it’s Bien Cuit. “I came here to eat good baguette. I support Bien Cuit because they are the closest to where I live, but I’m playing fair and voting for the best baguette—I’m hoping it’s theirs.”

The first Baguette Battle—which sold out in short order—happened alongside a renaissance in public interest in quality artisanal baking, a movement echoed by the ascendance of new independent bakeries like L’Imprimerie, founded in 2015 by Frenchman Gus Reckel, and the continued successes of established bakers like Eric Kayser.

Congratulations to all of our exceptional finalists!