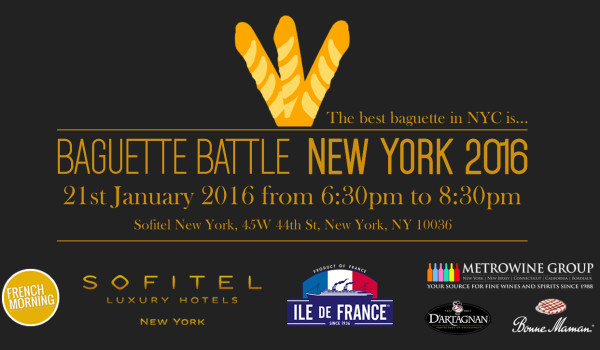 Thursday, January 21st, French Morning will crown one bakery’s wares as the Best Baguette In New York. The finale will cap off an open tasting event that includes cheeses and charcuterie from D’Artagnan and all kinds of delicious breads. Despite the emphasis on baguettes, tickets are selling like hotcakes, but there are still some left!

Fifteen talented bakers will face off at the Sofitel and be judged by a panel of professional chefs, food writers, and gourmands for the Grand Prix—the public will award its own Special Jury Prize as well. Here are the finalists, arranged alphabetically to avoid any favoritism:

This DUMBO bakery is the darling of the neighborhood, who mobilized to support it after Sandy took it out of commission. Here, everything is made ​​on-site. “Simple, fresh, and tasty—this is our philosophy,” says the bakery, led by Hervé Poussot. “We use the best ingredients, and we take no shortcuts.” Website

What started as a small business of five employees for Amy Scherberg in 1992 has blossomed into an operation with a staff of around 200 serving Hell’s Kitchen, Chelsea, and the Village, and even the New York Public Library! Last year, Amy opened up the artisanal shop Pantry by Amy’s Bread in New York and Vermont.  Website

The people of Cobble Hill are already very familiar with Bien Cuit, the small-batch bakery frun by Chef Zachary Golper and his wife, Kate Wheatcroft, and even Bon Appetit magazine has nominated their baguette for the best in the United States. Better than that: Gopler was honored with a James Beard Award last year! Website

Since its inception in 2013, Breads Bakery has grown rapidly, trading on its proud tradition of offering fresh, hand-made bread, leading Eater to name it one of the ten best new bakeries in New York. They’ve since opened up shop in Bryant Park, with plans to take on Lincoln Center this year. Website

This bakery in Queens is led by two Frenchmen, Jean-Claude and Jean-Philippe Perennou Rougié. Their pastries—including their red velvet cake—have been acclaimed by the New York Times. Their menu also includes a Paris-Brest and other small delights. First launched in Jackson Heights, Cannelle opened in Long Island City last year, where they sell special sourdough breads and whole wheat. Website

New Jersey’s sole representation in the competition! French native Clémence Danko opened the bakery in 2012 to “fill a shortage of good croissants and breads west of the Hudson River.” At Choc-O-Pain, it prides itself on respecting traditional production methods and ensuring the selection of ingredients. The small company has two outlets in Jersey City and Hoboken, with another on the way in Jersey City. In April, Choc-a-Pain was awarded the Outstanding Alumni Award for Excellence in Bread Baking by the International Culinary Center. Website

Behind all the breads in the  Boulud empire (across restaurants and grocery stores alike), there is Breton François Brunet. Coming from a long line of bakers, he started as an apprentice to Didier Chouet. His career took him to Australia and Las Vegas (at Joël Robuchon) before joining Daniel Boulud in 2014. The website Bloomberg called his “nutella croissant” the most “beautiful and addictive” in New York. Website

You know the juggernaut that is the Fairway chain, but who’s behind it? The small team is led by David Cummings, bakery vice president and a graduate of the American Institute of Baking, after an auspiciously starting his career hand-cutting hand donuts for his father’s business. He is assisted by Jonathan Becker, bakery director , and David Wasserman, manager of production, a fourth generation baker who owned his own bakery in Brooklyn for 20 years. Website

This “market” for the French in the south of Manhattan is considered, rightly or wrongly, as the French Eataly, which certainly weighs a tad on the shoulders head baker Lisa Kirschner. Trained at the prestigious Culinary Institute of America (CIA), where she taught as well, this professional baker then went to the best school bakery in the world—Paris—where she worked closely with several bakers to hone her knowledge. Website

The Belgian chain has become not just quotidien but outright ubiquitous across the New York City landscape with its bakery breads, croissants, and other pastries shared around the legendary communal tables. The baguette is one of many offered by the bread brand—les flûtes are also worth a try—and the company prides itself on making them in the rustic, European fashion. Website

This Bushwick bakery delights locals every single morningbeen delighting local daily. Hailing from Fourneaux, the  bearded Reckel Gus produces all theirs breads and small sweet treats on-site daily. He even installed a beehive on the roof of the bakery to make his own honey (it is Bushwick, after all). The bakery opened in 2015 in place of an old printing press. Website

French ex-pats love Eric Kayser—what better endorsement does anyone need? Since its first bakery-restaurant opened on the Upper East Side, Maison Kayser has continued to expand apace, opening shops on the Upper West Side, Flatiron District, and Bryant Park to name a few. In late January, it will open its first small bakery in Brooklyn. Their success owes much to Executive Master Baker Yann Ledoux, who joined Maison Kayser in 2006. He come up by way of Dubai, where he oversaw the opening of three Kayser bakeries, and the construction of a giant bread Eiffel Tower bread for the opening of the Galeries Lafayette. Website

Orwashers is to bread in New York what Katz’s is to pastrami: inseparable. This traditional bakery has used its time-tested methods since it opened in 1916, spotlighting its local roots. Launched on the Upper East Side to serve immigrant populations from Europe truly artisanal, continental bread, they now work with local farms and mills to produce flour “100% made ​​in the State of New York.” They continue to sell their bread directly to customers through their bakery on E. 78th Street and at several outlets in the tri-state area. Website

Runner and Stone was founded by chef Chris Pizzulli and baker Peter Endriss. The latter made his bones with Amy’s Breads (another finalist in the Baguette Battle) and a bakery in his father’s city in Germany. He then moved onto Per Se, L’Etoile du Berger in Paris, and Hot Bread Kitchen in New York before opening Runner and Stone in Gowanus in 2012. Website