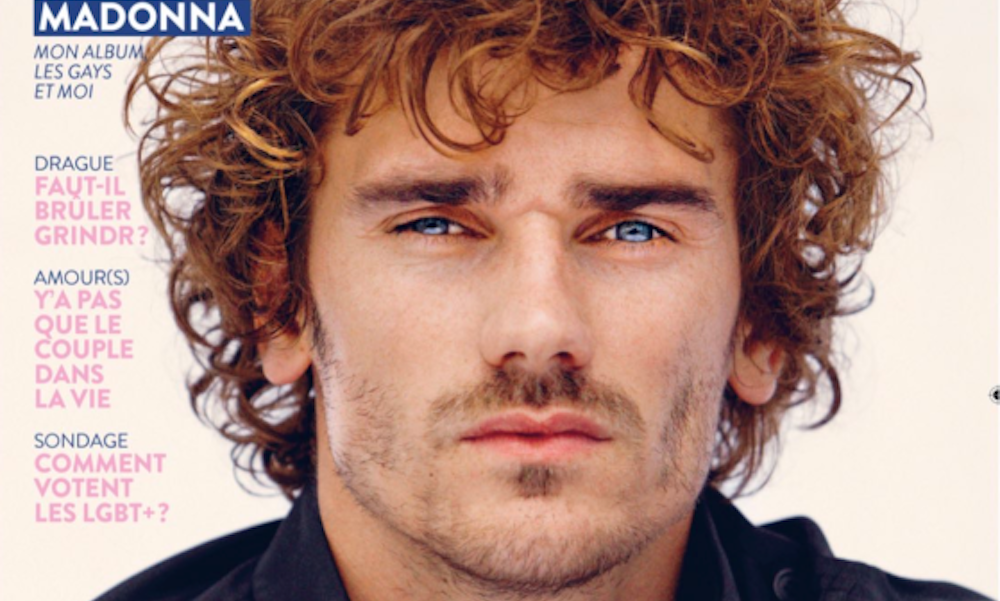 As France Fights Homophobia in Soccer Stadiums, Antoine Griezmann Is the Only Player to Speak Out

Those who don’t keep up with le foot in France are likely wondering, French soccer has a homophobia problem? From the vantage point of our couches, French soccer supporters seem like a passionate, if not overzealous, group of rowdy (mostly male) fans. But seated in the stadium, listening to the supporters’ cheers to rally the troops and insult the day’s enemy, a different picture takes shape. In France, soccer and the fans that cheer for it have a homophobia problem.

All you have to do to see it is listen to the chants, which often use gay slurs to criticize the opposing team. “Homophobic chants have been tolerated for a long time by many club officials, and soccer authorities have struggled to find the appropriate ways of tackling the issue,” explained The Washington Post. But on Monday, May 13, the president of the France’s Ligue de Football Professionnel Nathalie Boy de la Tour announced an action plan to address homophobia in its stadiums.

Under the new plan, a person who makes homophobic insults in public places like stadiums will be subject to massive fines (22,500 euros, or $25,000) and six months in prison, according to Frederic Potier, the French government’s representative on racism, anti-Semitism, and discrimination. Referees will also be able to stop games when there are homophobic incidents targeting players (they can already do this for racist incidents). Leagues will be penalized with point deductions (a key part of how league play works) if they’re found guilty of discriminating against gay players. Clubs can also be fined when their fans sing homophobic chants, like in the case of the League 2 club Lens, which  received a fine of 50,000 euros ($56,000) for homophobic chanting by their fans.

Since identifying the specific perpetrators of offensive chants has been difficult for the league to accomplish alone, they will start to rely on the help of fans, at least in part, to enforce the new policies. Spectators will receive forms, allowing them to report a sexist, homophobic or racist incident in the stands.

It was the league president’s response to homophobic chanting at a match in Paris between PSG and Marseille in March that really forced the issue to the forefront. “I’m not making excuses. But when you talk about homophobic chants, for a lot of supporters, it’s part of the folklore,” Boy de la Tour told Le Parisien after France’s sports minister, Roxana Maracineanu, discussed proposing a ban on homophobic chants in stadiums.

Over a week later, facing criticism from Minister of Gender Equality Marlène Schiappa and activist groups aiming to stamp out homophobia, like Rouge Direct, Boy de la Tour clarified at a meeting with the sports ministry that she “condemns all homophobic words.”

Homophobia isn’t just a problem in the stands; it’s also an issue in the locker rooms among the players, who have for this issue, figuratively, stayed on the sidelines when it comes to making statements against homophobia — except for Griezmann.

A documentary, “Footballeur et homosexuel, au coeur du taboo,” by Yoann Lemaire and Michel Royer, about homophobia in the French soccer league broadcast mid-May on France 2; Griezmann was the only soccer player who agreed to speak on camera for the film.

In the documentary, Griezmann explains that if one of his teammates came out to him as gay, “I would encourage him to be proud and happy. I think that it could open the door for others and I would do anything to be there for him and show him that it’s normal.”

Lemaire told The Washington Post that “99%” of the players asked to participate in the film refused to speak out. “Even just to say that it would not be a problem to play alongside a gay player. And when the player is OK to speak, their agents or clubs stop them from doing so to soften their communication,” explained Lemaire.

Griezmann, who is married to a woman, has a profile that will likely elevate the issue if he continues to speak out and convinces other players to use their voices as well. Fellow French soccer players David Ginola and Olivier Giroud, neither of whom participated in the documentary, have also posed for Têtu, preaching messages of tolerance, “but their notoriety was not equivalent to that of ‘Grizi,’” noted LCI.

The league’s plan to combat homophobia will include providing coaches and players with educational leaflets and opportunities for dialogues. But whether or not a new tolerance, if not acceptance, among players will be demonstrated outside of the locker room is still a big question mark. For the Global Day Against Homophobia, held on May 18, the league asked captains, coaches, referees, and match delegates to sport rainbow armbands to demonstrate their allyship with the LGBTQI community. This instruction was ignored by many, with some claiming that the band “didn’t hold well” on biceps, according to LCI.

Even though Griezmann isn’t in a French league and therefore wasn’t required to wear a band, it’s clear that his allyship on the field will be unwavering. In his interview with Têtu, Griezmann declares: “It must be reiterated that homophobia is not an opinion, but a crime. And from now on, if a player makes homophobic comments on the pitch, I think I’ll stop the game.”