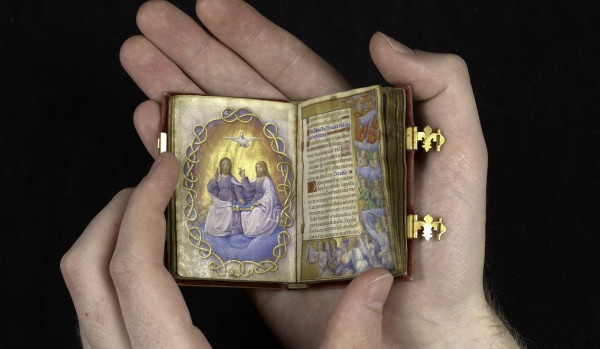 The 16th century French artist who became famous for his illuminations — miniature, hand-painted scripts and illustrations of sacred texts — is known only as the Master of Claude de France thanks to his mysterious identity. “We haven’t actually found any secure documentation of his real name; there, so far, is no smoking gun” says Roger Wieck, Curator of Medieval and Renaissance Manuscripts at the Morgan Library & Museum. “But even though we don’t know his real name, we do know a lot about his work and his career.” Thus, the artist is named for the queen consort of France for whom he created his most famous works: two miniature prayer books currently on display as part of an exhibition at the Morgan called Miracles in Miniature: The Art of the Master of Claude de France.

It was through this pair of prayer books, each no larger than a credit card, that the contemporary world came to know the Master of Claude de France when New York rare book dealer H.P. Kraus acquired them in the 1970s. “Kraus knew from the heraldry that these two books had been created for Claude de France by the same artist, so he commissioned art historian Charles Sterling to write a book about them. It was Sterling who baptized the illuminator as ‘the Master of Claude de France,’ and the name stuck,” Wieck explains.

When asked why the prayer books are so tiny, Wieck chuckles. “It was the fashion among French royalty at the time,” he says. “The smaller your book, the more chic it was. They came to function almost as jewelry.” Illuminating co-existed with the printing press for about 100 years. “These are all books that were written and painted by hand,” Wieck explains. “Although they were created during the age of print, there was a group of people—mostly wealthy and royal—who still preferred their books to be hand-painted.”

At first glance, the books seem to be almost interchangeable. As it turns out, however, Claude de France specifically requested two separate books with different texts — one to use in public and one for private use. Wieck says that while Claude’s “Book of Hours” contains more generic prayers, suitable to be glanced at by a fellow parishioner at mass, the other book contains more personal texts addressing a specific concern: giving birth to a healthy male child. “This was especially worrisome for Claude because her mother, Anne de Bretagne, had already failed twice in two marriages, to give birth to healthy boys. In her second marriage, she gave birth to two stillborn boys—Claude’s brothers.  Since Claude had already had two female children at the time she commissioned the prayer books, she was afraid she might have inherited her mother’s curse.”

These two fascinating prayer books are only a small part of the treasures on display as part of the exhibit, which includes additional illustrations by the Master of Claude de France and one by his mentor Jean Bourdichon. There are no jewels or furs, but the room at the Morgan is brimming with French royal possessions that belonged to Claude de France, her sister Renée, her father King François I, and her mother Anne de Bretagne.

Though he has been dead for centuries, the Master of Claude de France lives on in today’s art scene as his works continue to surface. “This piece actually appeared at an auction last December,” Wieck says, pointing to a small illustration, “and I was able to recognize this as the Master of Claude de France’s work. This face is almost identical to some of his other work, and the color palette matches—this raspberry red was one of his favorite colors to use.” With so many discoveries popping up, perhaps one will be the artist’s real name.