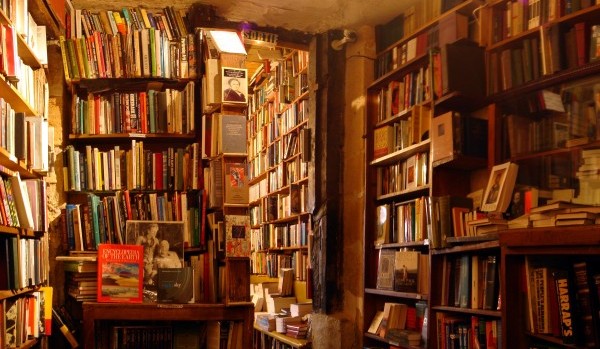 It’s a well-known fact that France loves its books and makes protecting them a priority. Since 1981, the Lang Law has regulated book sales by forbidding stores from offering more than a 5% discount off of the publisher’s price printed on the back cover, helping to make France one of the last thriving markets for books in the world. The Internet, of course, has other ideas, and with wholesale websites (like Amazon) and the ebook market continuing to grow, France has decided that the Lang Law needs a boost.

In recent years, Amazon has given itself some major advantages in the French book market by offering consistent 5% discounts and free shipping while paying lower taxes in Luxembourg (aka the Delaware of Europe). Out of France’s 3,500 bookstores, 600 to 800 are independent, and France saw its book market beginning to look like a fight between David and Goliath if David’s slingshot was on the fritz.

So the National Assembly decided to do something about it, passing a law that banned booksellers from offering a 5% discount with free shipping. Dubbed the “Anti-Amazon law,” it just recently went into effect only to have Amazon announce that it will start charging 1 cent for shipping, effectively defeating the original purpose of the law.

This isn’t the only recent controversy stirred up by Amazon. In the US, Hachette Publishing claims Amazon has responded to a disagreement between the two companies by attempting to hinder sales of Hachette titles with tactics like delaying shipping and removing the “buy” button from Hachette titles on Kindle. In Germany, Amazon is facing angry publishers who have asked the government to investigate the company’s possible violation of antitrust laws. With multiple critics of Amazon’s business practices, it seems unlikely that France will let this new shipping policy slide.

Midway through Tour de France 2014, 2 Favorites are Out

Considered a favorite to win it all this year, Chris Froome saddened fans when he was forced to drop out of the Tour de France last week. Winner of the 2013 Tour, Froome ended his participation in the notoriously brutal race after suffered three falls in 24 hours resulting in injuries to his wrist, hips, and arm.

Now, in the 10th stage of the race, Spanish cyclist Alberto Contador has to abandon his dreams of adding a third Tour de France victory to his collection (he won the race in 2007 and 2009). Contador endured a serious fall during a particularly difficult and mountainous part of the race, finding himself at the bottom of the Petit Ballon descent, just before the looming Platzerwasel ascent. With injuries to his right knee and back, the Spaniard waited while the medical team bandaged him up and replaced one of his damaged shoes. Contador got back on the bike and climbed the Platzerwasel, but had to surrender just after the summit and leave the race.

With Froome and Contador out of the running, the key players seem to be German Marcel Kittel, Italian Vincenzo Nibali, Slovak Peter Sagan, and Frenchman Tony Gallopin. With the race almost halfway over (10 out of 21 stages have been completed), it’s almost impossible to know what will happen. Falls can happen easily, to any rider, no matter their skill level.

Get live updates on the Tour de France 2014 here, and read about the race’s key moments here.

It’s Hard to Compete with a Firework-Festooned Eiffel Tower

France’s national holiday July 14th is dedicated to honoring the country and celebrating national pride, so perhaps President Françoise Hollande figured he would benefit from a little bit of patriotic good-will by appearing on TV to rally some support for his presidential agenda. He is, after all, currently France’s most unpopular president.

Hollande kept his statements optimistic, saying, “The recovery is there, but it’s too fragile, too tentative, too vulnerable.” The French president discussed economic reform (“support business, reduce household taxes and cut public spending”) and the highly debated Responsibility Pact–an agreement that would force employers to create more jobs but allow them to reduce payroll charges.

The left-leaning news outlet Le Monde claimed that Hollande had “never seemed so strong, so sure of himself, so clear on his goals,” than he did on July 14th, whereas the right leaning news outlet Le Figaro preferred to emphasize Hollande’s slip-of-the-tongue when talking about the recently indicted Sarkozy:

“Everyone must be certain that he is a prisoner … is presumed innocent before being found guilty.”