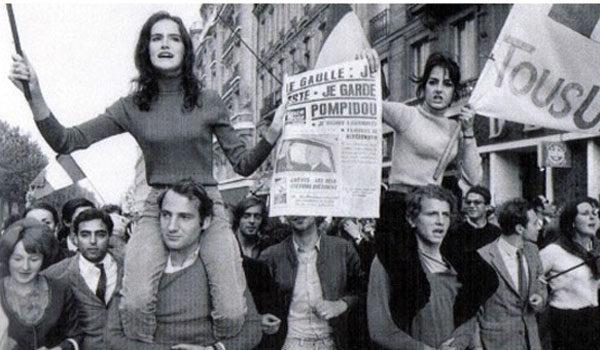 Why Another French–Youth–Revolution is Coming Up

A big survey of French youth came out this week and France has declared, yet again, that it is very worried about its young people. I have written about it here before and, besides, what country isn’t worried about its 25 and unders, right? It’s been a long global recession, and all over the world, there’s been talk of a lost generation, of whole decades’ worth of kids without futures.

But France has had problems with its youth before. It was called May ’68—you’ve probably heard of it—and it both terrified and totally revolutionized French society. And this week, for the first time since France has been officially deeply concerned about its youth in this time of crisis, the word “revolution” is on people’s lips again.

“The self-portrait is dark”…“It’s a generation that’s been sacrificed, scorned, downgraded, that’s been denied a fair shot by society and the professional world, and that faced with so much frustration, could explode.”

Those are just a few of the assessments of a large-scale survey of 18 to 34-year-olds done last fall in a partnership between some of France’s leading media (the newspaper Le Monde, the public TV consortium France Télévisions, the radio station Europe 1). The first results, focusing on youths under 25, came out this week, headlined with some pretty depressing numbers. It turns out that not only do 45% of France’s kids think they will be worse off than their parents, but 43% think their own children will be worse off than they. Also, over a third of youths think they won’t ever know anything but economic crisis throughout their lives.

False promises, say French youth, who don’t actually believe they are guaranteed any opportunities up ahead.

French youth, it seems, is totally exploding the French barometer of pessimism. This might not seem terribly unusual, since the French manner, as it tends to be perceived abroad, always comes with a subtext of pessimism—this is the French way (they always rank highest in global measures of pessimism). But usually it’s not the way of 18-year-olds. Usually there is a sense of dewy expectation and hope, a notion that—as most parents, most societies, most governments tell their kids almost mechanically—you have your whole future ahead of you.

Not the French kids. They are, evidently, disgruntled, bummed out, depressed. In France, over 25% of 18 to 25-year-olds are unemployed. One in four kids is sitting by the phone feeling, to some extent, disempowered from any control of his or her own fate, which makes it hard to make plans for that whole future ahead of you. Among those who do have jobs, 60% believe they are underpaid relative to their qualifications, and nearly half think they are over-qualified for their jobs.

Is that just Generation Y entitlement? That generation of kids that expects promotions right away and is talking about work-life balance in the first five minutes of their job interviews? That generation that, allegedly, wasn’t educated in the ways of hard work and hard knocks and doesn’t really get the concept of delayed gratification?

According to this survey, no. It’s not a free-lunch generation. Among those polled, 81% say they believe strongly in the value of work. Their disgruntlement, it seems, is more complex, rooted in the very way the system is structured. It’s not that they don’t want to work hard or that they don’t appreciate the opportunities to do so—it’s that they feel that they’re denied those chances. Fully 70% of youths think that French society doesn’t give them the means to show what they’re capable of. That’s a sharp rise from 2006, when 53% thought that. The highly-selective secondary school system, the prestige-driven higher education system—61% of kids say it lacks meritocracy, that the education system doesn’t reward skill, and doesn’t give equal opportunities.

So what is to be done? The French government, for one, doesn’t really seem to know; or to want to acknowledge what this survey reveals: that the disaffection of French youth doesn’t concern just their own future, but the whole way things work in France. Like lots of other problems, the French government does seem to want to acknowledge that its youth problem is structural. And in any case, as far as the 18 to 25-year-olds are concerned, the government probably doesn’t have the solution anyway since 46% of youths don’t trust politicians at all.

According to sociologists who are interpreting the survey, the time for solutions for youths may be over, and the possibility of revolution could be real. They describe it as a pressure cooker without a release. “It’s a generation that wants entry into an ageing society,” say the sociologists. “They are enraged to be left waiting on the doorstep. They don’t want to overthrow society—there isn’t actual a conflict of values—but they are tired of hitting against closed doors and they are sending out a warning.” They see the classic ingredients for a potentially explosive social cocktail: frustration with being excluded, with a lack of social status, with unfulfilling, under-paying jobs, with having no jobs or homes at all.

Add to that mistrust of politicians and the sense of being denied the right even to hope for success in the future and you get this kind of answer from youths to the question of whether they could imagine a May ’68 type revolt now or in the near future: 61% said yes. Including more than half of those youths who do have jobs.

French youth might be depressed and pessimistic, but evidently, they’re also pissed.

The French might want to have a serious think about finding a new—potentially terrifying, undoubtedly disruptive, and necessarily innovative—place for their youth today… before May 2014 rolls around.