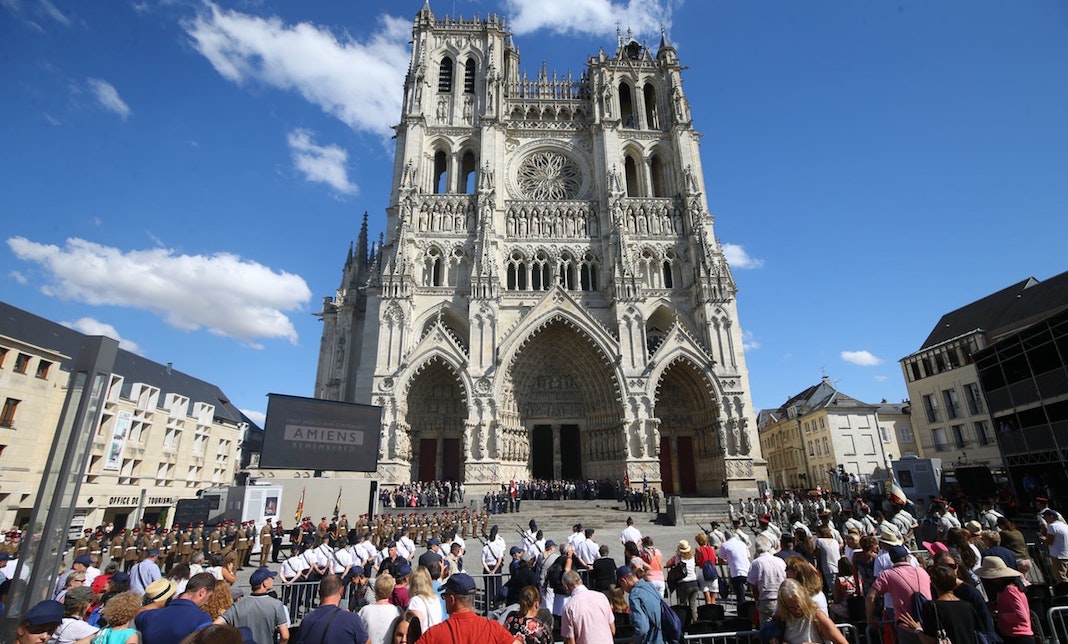 On August 8, 1918, a deadly battle began in Amiens, France. The Allies had launched an assault on the German soldiers, and for the first time gained the upper hand. On the first day, with 27,000 Germans taken prisoner, the territory the Allies gained amounted to 8 miles. Three days later, 86,000 lives had been claimed, 46,000 of whom were German soldiers.

It was the Hundred Days Offensive, the relentless fight that caused the Germans to retreat, demoralized, and later sign an armistice on November 11, 1918, to end the first World War. The Battle of Amiens was the beginning of the end.

At the Cathédrale Notre-Dame d’Amiens, several thousand military and civil persons assembled for a memorial ceremony on August 8, 2018, one hundred years later to the day. Teresa May, Prime Minister of England, and Prince William, Duke of Cambridge, were in attendance. France was represented by Florence Parly, Minister of Armies, and  Geneviève Darrieussecq, Secretary of State for Veterans Affairs. Representatives from Canada, the United States, Australia, and Ireland, as well as the former German president, attended the ceremony as well. Without any World War I veterans still alive, several hundred descendants of the war’s veterans were there to represent them.

Once the delegations had arrived and filed in, the ceremony began. It was a melange of French, English, German and Québeçois, of tragic and heroic tales read from the letters and diaries from those on the front lines, of symbols and tributes of hope, of song and prayer. Over one thousand attendees sat outside the cathedral, observing the ceremony streamed on a large screen installed at the edifice.

Prince William spoke of the significance of the war’s allies and enemies uniting together for the centennial anniversary. “Today, we return to learn more about the experience of those involved during the historic summer of 1918, to honor the fallen of all nations, to commemorate all those who participated in this great endeavor, and to celebrate the bonds of friendship which unite our nations,” he concluded.

Besides the significance of the town, the cathedral is significant in its own right. In April, 1918, much of Amiens was demolished by shelling and bombing, but the cathedral was spared significant damage. After the war, a plaque was installed in the cathedral’s chapel in memory of the 600,000 soldiers from Great Britain and Ireland who died fighting in France and Belgium. Other countries followed suit, installing their own plaques to remember their dead. During the centennial commemorative ceremony, representatives from each country laid flowers in the Chapel of Allies, as its now called, to reaffirm the their friendship.

French president Emmanuel Macron, who himself comes from Amiens, was notably absent from the ceremony. The Mayor of Amiens, Brigitte Fouré, suggested his absence was caused by the French’s propensity to be on vacation in August. “I think that for the British, August 8 is an extremely important date but it is in the middle of a lull in French political life,” she said. “Our government has just gone on holiday.” Seemingly displeased by the allusion that Macron put countryside before country, Director General of the World War I Centennial Mission, Joseph Zimet, announced that Macron would “devote ten days of his agenda” to commemorative events of World War I.