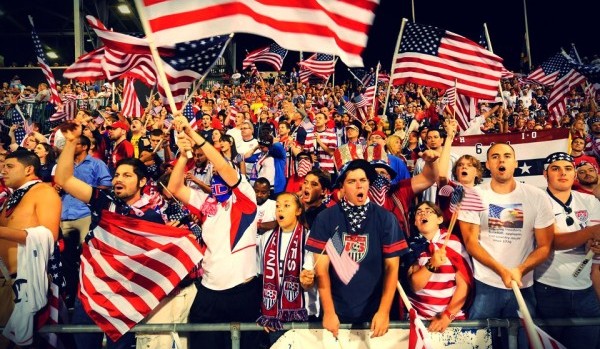 What do Americans love the most?
a) Boasting about their “freedom”
b) Cracking open beers and grilling hamburgers
c) Emphatically saying “Merica”
d) Winning
e) All of the above

Americans love sports. But to clarify, Americans love American sports. And the most important thing about American sports is the spectator traditions associated with them. In 2014, ESPN confirmed that NFL football was America’s favorite sport, with Major League Baseball coming in second. Why? Because an entire American culture has unfolded and developed around these two sports. Everyone knows that a football game isn’t a football game without a tailgate, Budweiser, and hot dogs, and a baseball game without Crackerjacks and a sing along to “Take Me Out to the Ball Game” is just unthinkable.

But every four years when the World Cup rolls around, Americans drop everything and become diehard soccer fans. The problem is, they just don’t really know how. It’s not that they don’t understand the rules (only the goalie can touch the ball with his hands, the object is to kick the ball into the goal, and there’s a confusing thing called offsides?), it’s just that there’s no American tradition associated with being a soccer fan. With no clue how to act, Americans are picking and choosing from different European and Latin American soccer traditions: using English soccer terms like “match” (game), “pitch” (field), and “kit” (jersey) and wearing European-style team scarves so they can hold them up horizontally from the stands like banners.

Maybe the lack of American soccer traditions is due to the fact that many Americans don’t feel like soccer is a very “American” sport: “I see soccer as more of an international sport,” young New Yorker Jonathon Miller-Meeks says. “At this point, there aren’t as many American traditions associated with soccer as there are with baseball. But that chant—‘I believe that we will win’—is exclusive and specific to American soccer, and I think things like that are growing.”

Americans may not be full time soccer fans, but they are definitely full time World Cup fans. Americans bought more tickets than any other country to the 2010 World Cup held in South Africa, and 24 million Americans viewed the tournament’s final game despite the fact that our red white and blue team was long out of the running. This year, Brazil (the country hosting the tournament) was the only country to buy more tickets to the World Cup than America.

Some loyal soccer fans may be annoyed by the fact that Americans everywhere have started acting like experts on the sport, but avid soccer fan Max Zissu is ecstatic. “I like how excited people are getting about the sport. Every time there’s a surge, like the one for the World Cup, there’s a higher level of fans afterwards.”

Mostly though, Americans just love the World Cup because they love America. Recent college graduate Alex Dhaja says, “I never ever watch soccer, but it’s nice to see everyone supporting the USA for the World Cup. It’s such a big event that everyone can rally around.” Americans may have no clue how to be soccer fans, but they’ll figure it out soon enough. And borrowing foreign soccer words like “pitch” or wearing European style wool scarves doesn’t mean that they won’t find a way to put an American twist on the sport. After all, they’ve already given a special American name to the sport that the rest of the world calls “football.”