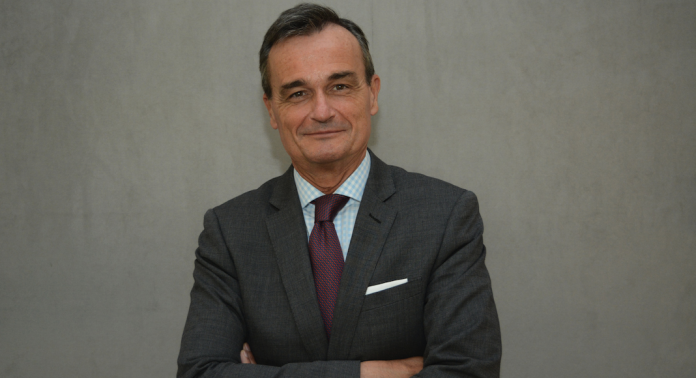 Despite having a packed schedule (and he hasn’t even begun the process of passing down documents to his successor), Gérard Araud has time to prepare for life after ambassadorship.

After three years in Washington, 12 years on American soil, and 35 years in diplomacy, the Ambassador of France to the United States will be retiring from his position this summer. It’s out of the question that he’ll stop working altogether. He’s looking to start over and split time between France and the United States. “I don’t know where I’ll be in three months. It’s not a tragedy; it’s actually quite exciting,” he confesses to French Morning.

Appointed by François Hollande in 2014, Araud will be succeeded by Maurice Gourdault-Montagne, who was most notably the diplomatic adviser to Jacques Chirac during his tenure at Elysée Palace. “No. Not punished. [It’s a] normal end of my three-year term,” Araud tweeted a few months ago. His message was in response to inquiries if he was being sidelined because of a controversial tweet from election night in November 2016: “A world is collapsing before our eyes.“

“I deleted the tweet after a few minutes, but by then it had already had enough time to become famous,” Araud continues. “People interpreted the message to be a criticism of Trump, but that was not the case at all. It was a way to say, it’s an end to a certain way to do politics, as it was for Brexit.”

Araud’s style of diplomacy has been, at times, a little untraditionally diplomatic. Vogue called him outspoken, the New York Times said his tweeting was “zesty undiplomatic diplomacy.” Acting in accordance with that style, he boasts that he has 35,000 followers on Twitter. “You could easily be an Ambassador Ferrero Rocher, and no one would complain,” he says, alluding to being a Mr. Nice-Guy or a do-nothing. “I find that more or less useless. I tried to change this job, but the French are paradoxical. On one hand, our administration should be modernized, but when it does, the French complain about it. No doubt I’ve made mistakes, but I think the overall results aren’t too bad.”

During Araud’s three years in Washington, he never dealt with any major diplomatic crises. They years, however, shaken by the news of three terrorist attacks. For him, the attack in Nice remains one of the most haunting memories. “I learned of the July 14th attack while I was preparing to go to the ceremony at the embassy. What was supposed to be a celebration of our National Day became a time for grieving,” Araud recalls.

In his office, Tintin, Milou, and Captain Haddock are always (and still) in their spots of the yellow miniature car from The Adventure’s of Tintin: Seven Crystal Balls. There’s no rush for Araud to displace himself; he’s allotting a few months to find somewhere to settle. He does know what he doesn’t want to do: French politics. “I’ve never done it, and I won’t ever do it,” he said. An ambassador at the end of his career should focus more on writing his memoirs, but to Araud, “These exercises in vanity are generally tedious, so I hope not to fall into that.”

For the time being, Araud is directing his energy towards think-tanks. “One of the good things Americans have going for them are these research institutes, which are fantastic resources where you have people who can reflect deeply for long amounts of time on small, precise subjects,” he raves. His preferred topic to ruminate on is contemporary transatlantic relationships.

However, when you’ve been a government employee for most of your life, job interviews aren’t so easy. “It’s a new exercise, and I don’t feel particularly comfortable doing it,” Araud admits. “When you’re Ambassador, you’re the boss. But now, I certainly won’t be the boss, so that’s going to be a challenge. Sometimes, I feel a little… perplexed.”

Before leaving his post, Araud will serve a few weeks under the new French president. Commenting on the possibility of Le Pen win a few weeks before the election, “In diplomatic terms, I’ll say that it would be a total disaster,” he confessed to The Washington Post. The higher-ups in Paris have since sent a letter to all the ambassadors, reminding them to use “professional discretion.” And yet, Araud still insists, “When faced with one’s conscience, discretion disappears. Diplomats have the right and the duty to follow that, too.”

In the end, however, it wasn’t about choosing a candidate—at least not publicly. To the French people overseas who are registered to vote, the French ambassador of Washington had one message before the first round of voting: “On November 8th at 6:00pm, Mrs. Clinton’s campaign told me me she’d be elected. And we all know what happened after that. Everything is possible, so all the French must vote.” Following Macron’s win on May 7, Araud tweeted, “By electing Emmanuel Macron as their next president, the French have made the choice of an open, forward looking and European future.”