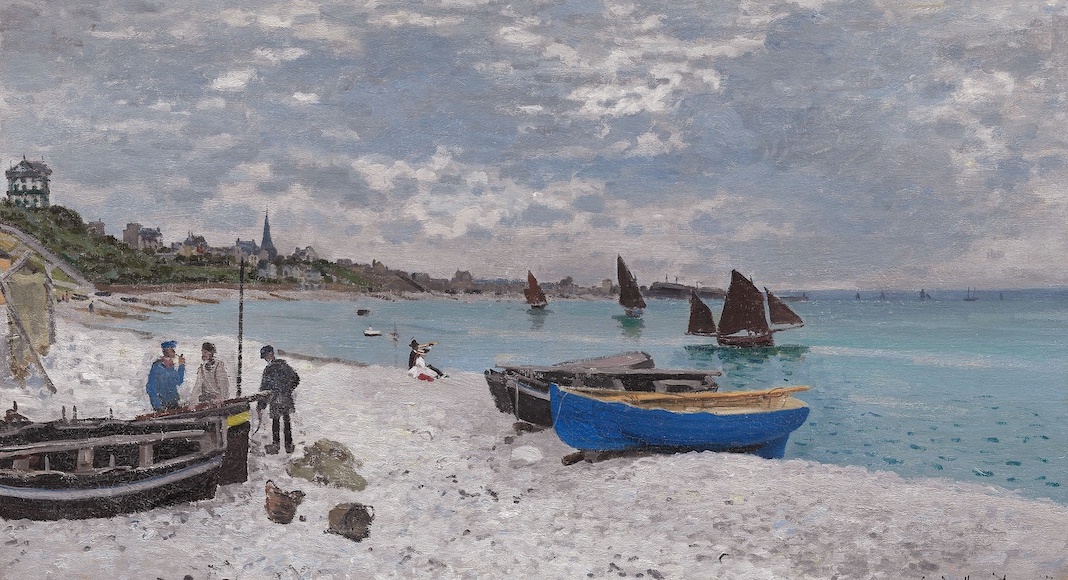 A Trip Through France with Monet’s Masterpieces

Monet traveled to Venice, London and Amsterdam, but it is France above all that features the most in his paintings. For him, nothing beat outdoor painting, which was made much easier thanks to three major inventions: the portable easel, paint in tubes and the railroads. Monet and the painters of his generation were able to travel tirelessly. Here’s how to follow in the steps on Monet in France.

On the beaches of Normandy

Head for the beach of Sainte-Adresse, a seaside resort that was popular in the second half of the 19th century. Painted in 1867, this piece was long rejected by the managers at the official Paris art exhibition, Salon. In their eyes, Monet had painted only a vulgar landscape and was experimenting. Look at the differences between the sea, the sky and the beach: if the sea surface is smooth, you can see Monet’s touch on the big gray sky and the thin sandy beach. It seems as if the sky is moving… Like at the water’s edge, where a few discreet strokes in a more intense blue outline the waves. The painter is already more interested in the natural elements than in the characters — small fishermen — whom he represented in the bottom left of the painting. — on view at the Chicago art institute

Under the snow in Honfleur

On this small road linking Honfleur to Trouville, the characters are even more discreet. The snow-covered roofs are those of the Saint-Siméon farm, an inn famous for its good cuisine, which was then regularly frequented by painters. Is it to pay tribute that Monet chose to paint this scenery? This landscape allows him to work on the variations of light. You might say that a large all-white landscape should seemingly be easy to paint… But to recreate the effect of light reflected on the snow, it is actually necessary to do some very precise work using a multitude of shades of gray, silver, brown and blue, placed here and there on the canvas with more or less thickness. This becomes the main subject of the painting. Just before “la grande exposition impressioniste,” Monet was already revolutionary. — on view at the Musée d’Orsay in Paris

Light breeze by the sea

Even with a more classic subject, such as the Hôtel des Roches Noires, you can see Monet’s audacity. Trouville, another seaside resort town in Normandy, which attracted the nobility and bourgeoisie of the Second Empire. Courbet, Whistler, Manet and Degas also immortalized the town in their paintings. Look at the composition and format of this painting. A large diagonal divides it into two parts. One side embodies stability: the building, characters and lamp posts stand up straight. The other side offers itself to the sky and the wind, which swells the flags and pushes the clouds. But these two opposite worlds, Monet brings them together by painting them in the same way, with a lot of energy. It’s this that makes the canvas seem to vibrate under the force of the wind. — on view at the Musée d’Orsay in Paris

The wind and the wild elements, Monet loved it and he didn’t hesitate to set up his easel in front of the waves. When the weather was too rough, he took shelter in a hotel to paint from the window, as here in Etrétat. The sea and the sky occupy all the space. The cliff is painted with horizontal touches, the crest of the waves in a whirling way. On a thin strip of beach, Monet depicted a few fishermen, but so delicately that you feel as though they’ll be swallowed by the sky… It was clearly nature alone that interested the painter. — on view at the Musée d’Orsay in Paris

Water was Monet’s favorite motif. Even far from the coast, he sought it out. With his friend Renoir, he often went to La Grenouillère, a place of pleasure invaded by Parisians during the summer months. But it was not the restaurant that interested the two painters. Monet and Renoir were looking to create a new way of painting. Look carefully at the layout of the boats, trees, branches and restaurant: in this composition, everything converges towards an islet, in the centre of the canvas, where the sailors stand. Our eyes are drawn to the movement of the water all, which is moving away from the islet. The technique Monet was experimenting with here reinforces this impression. He juxtaposes small touches of paint and unites unexpected colors: a little blue, lots of black, white, beige… — on view at the Met in New York

Sailboats on the Seine

This experimental style continued with the Pont d’Argenteuil. Look at the composition of the canvas, very structured. The foreground offers calm water where clouds are reflected. Three sailboats mark the boundary and open up a darker area of water, where the bridge and the tall trees in the background are reflected. Monet didn’t paint these reflections entirely, which allowed him to recreate the effect of the wind on the surface of the water. In the final part of the work, an almost clear band of sky, the canvas becomes calm and smooth again. Besides this work of great technical mastery, the pont d’Argenteuil was for many an impressionist subject par excellence: like the Grenouillère, these sailboats on the banks of the Seine symbolize the new leisure activities of a bourgeois society that escaped to the countryside whenever possible. — on view at the Musée d’Orsay in Paris

In 1886, Monet left for Brittany to find new subjects for inspiration. In Belle-Île-en-Mer, he planted his easel at the top of the cliffs and started 10 paintings at once. His way of painting evolved even more. This dark canvas illustrates this well. The touch is extremely agitated: sometimes vertical or horizontal, thick or thin, round or straight, it gives substance to the landscape. Monet also chose an original framing: the sea and rocks occupy almost all the canvas, the sky being reduced to a thin band that places the horizon very high. A detail that Monet must have drawn from the Japanese prints he discovered at that time. It gives a little Asian art air to this Breton landscape. — on view at the Musée d’Orsay in Paris

Under the sun in the South

There’s a strong contrast between the dark rocks of Brittany and this view of the south of France, bathed in light. Driven by Durand-Ruel, a merchant and friend who saw him as a painter of the sun, Monet went to the shores of the Mediterranean in the late 1880s. Maupassant, whom he met at friends’ houses, described Antibes to him as a paradise. Once he arrived, Monet was initially very disappointed and uninspired. But after several walks, he managed to paint this landscape, which he ultimately found dazzling and harmonious. In the end, in the Mediterranean, Monet wrote one of the most beautiful chapters in his Tour de France of landscapes! — on view at the Courtauld Institute of Art in London