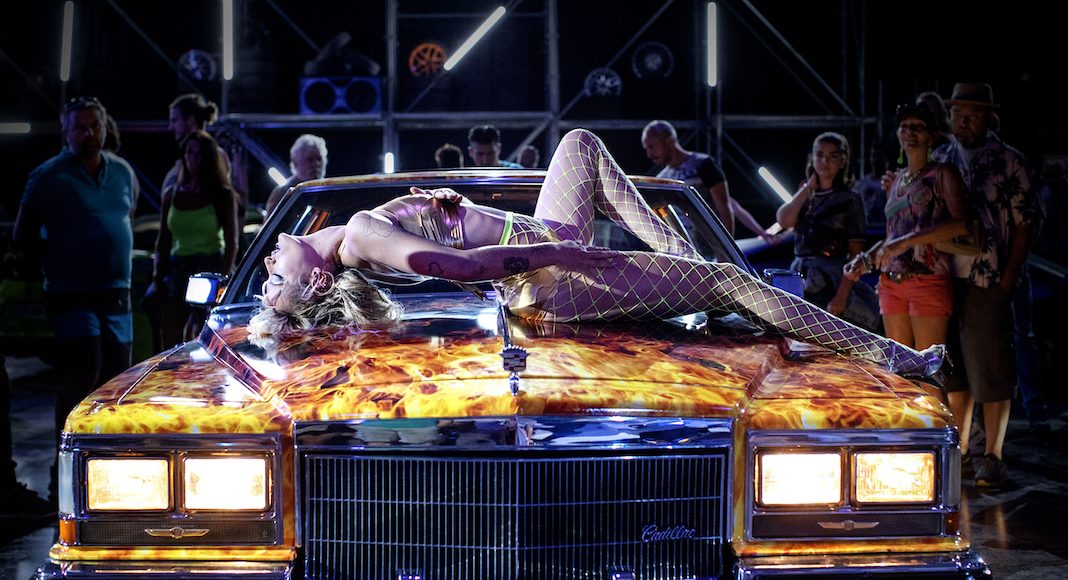 A Look Inside the Weird, Wild World of ‘Titane,’ the French Feminist Horror Movie on its Way to the Oscars

The last few years have seen a slew of high-concept horror movies redefining the genre, whether by using striking and unconventional aesthetics (Midsommar), innovative soundscapes (A Quiet Place), or social commentary and satire (Get Out). What was once a pulpy category reserved for teenagers and genre nerds has tiptoed into the realm of high art. And a buzzy new film from French director Julia Ducournau is breaking every rule in the horror playbook.

If you pay any attention to the world of French cinema, you’ve probably already heard quite a bit about Titane, which won the Palme d’Or at this summer’s Cannes Film Festival. This success made Ducournau the second woman ever awarded this prestigious prize, and the first to win it on her own. (The only other female director to win, Jane Campion, tied for the top prize with Chen Kaige in 1993.)

It’s a film about transformations, starring newcomer Agathe Rousselle, whom Ducournau selected for her unique look and powerful presence. “I knew right away she’d have to be an unknown face,” Ducournau says of the casting process in an interview. “As she goes through her ‘mutations’ I didn’t want people thinking they’re watching the transformation of a physically familiar actress.” Well, that certainly won’t be a problem, as Rousselle is barely recognizable as herself in some scenes, ferociously androgynous and plastered with prosthetics.

The film opens with a child, Alexia, getting into a car accident after distracting her driving father. We get our first taste of blood within the opening minutes, followed by a hint of the horror to come, as we watch Alexia get a titanium plate inserted into her head and her scalp sewn back on. Cut to an adult Alexia (Rousselle), whose job consists of her writhing in neon fishnets on top of hotrods at a car show. She’s a kind of niche celebrity in this oversexed, macho universe, disconnected from the people involved, but deeply in touch with the machinery around her. We’ll just come out and say it: she has sex with cars. And one fire truck. It’s hard to explain. The logistics alone are rather confusing. All you need to know is that she’s really, really into it—and the cars seem to be, too.

As if that weren’t enough weirdness, she’s also a serial killer. It’s not really explained why, or what the car stuff has to do with her fondness for stabbing people with a hairpin, of all things. And, surprisingly, this isn’t the most shocking thing she does with that hairpin. It’s a hard movie to watch, with most of the true horror afflicting womens’ bodies… but we won’t spoil too much here.

After going on the run to escape the police, Alexia disguises herself by, among other things, breaking her own nose. She pretends to be the long-lost son of a delusional firefighter, Vincent (played by Vincent Lindon), who decides, despite all evidence to the contrary, that this androgynous stranger is his son, Adrien. Never mind the fact that literally everyone around Vincent recognizes that he is being conned (and does surprisingly little to knock some sense into him). The second half of the movie is about Vincent and “Adrien” forging a complicated, even creepy, bond. “I wanted to make a film that initially may seem ‘unlovable’ because of its violence,” explains Ducournau, “but then we grow deeply attached to the characters, and ultimately we receive the film as a love story.”

Okay, so calling Titane a love story might be a little bit like calling Hannibal a cooking show. But every director is entitled to their vision. 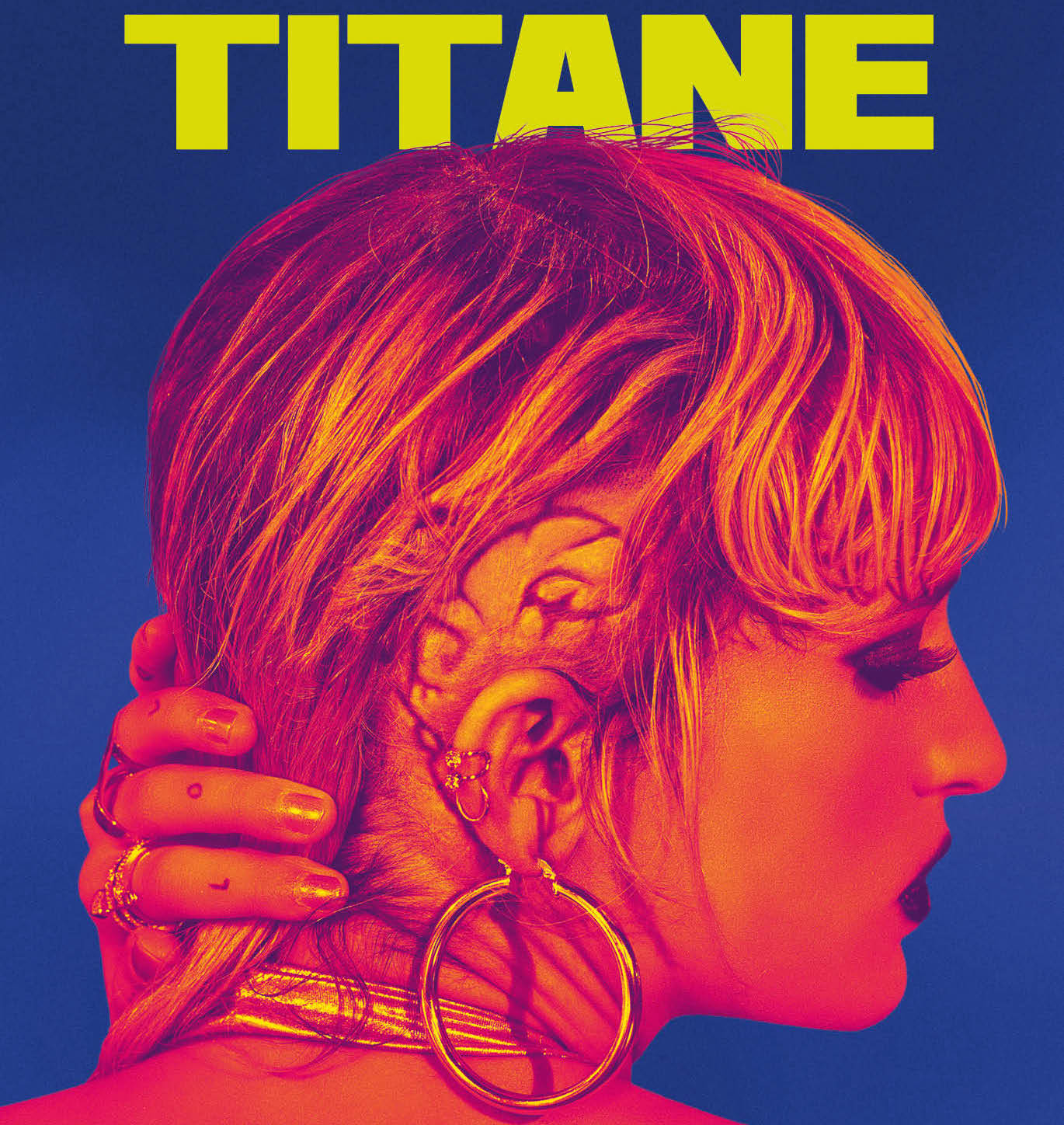 As far as international films go, Titane is made relatively accessible by the lack of dialogue in much of the film, with Alexia practically mute for much of it. Instead, the film is driven by a deliciously playful and goosebump-inflicting score from Jim Williams, incorporating jangly blues tunes with percussion and bells to create a metallic undercurrent. “Titane goes from animal to impulsive to sacred,” says Ducournau. “To help us feel that progression, the music must also fluctuate, hybridize, transform.”

Titane is Ducournau’s second feature film. Her first, 2016’s Raw (Grave, in French) feels like a more commercial prelude to Titane’s bizarre arthouse vibe. Raw follows a young vegetarian, Justine, through the hazing process of her first year in veterinary school. After being forced to eat a raw rabbit liver by her classmates, she develops an intense hunger for human flesh. It’s a much cleaner premise than Titane’s; it’s easy to explain, and you kind of get an idea from the beginning of how things will turn out. Strange as it may sound, the cannibalism feels less aggressive than some of Titane’s body horror moments. Perhaps it’s because cannibalism feels contained, almost campy, when compared to the sprawling and unpredictable nature of Titane’s violence. (After all, the vegetarian-as-secret-cannibal trope does feel a little Troll 2.)

An interesting tidbit for fans of Ducournau is her process for naming the characters in her films. You might notice that in both Titane and Raw, actress Garance Marillier plays a character named Justine. And Alexia is the name of both Titane’s heroine, as well as Justine’s sister in Raw (played by Ella Rumpf). Adrien is also used in both films, as Justine’s roommate in Raw, and Alexia’s alter-ego in Titane. In fact, all three names (Alexia, Justine, and Adrien) have been used since Ducournau’s 2011 short film, Junior (in which, once again, Marillier plays a character named Justine).

It was recently announced that Titane has been selected to compete in the category of Best International Feature Film at the Oscars. France has an interesting relationship with this category, maintaining something of an, “always the bridesmaid, never the bride” arc. It is the most-nominated country in the history of the category, yet it hasn’t taken home the prize in three decades.

Could this be the year for a major French victory? The last couple of years have seen a growing appreciation for foreign film and TV, with major streaming hits like Lupin and La casa de papel overcoming the “one-inch-tall barrier” of subtitles to become massively successful. At last year’s Oscars, the South Korean thriller Parasite famously made history by becoming the first foreign language film to win Best Picture, theoretically making way for other non-English language films to do the same.

It all comes down to what American audiences can stomach. Will this violent, gender-bending fever dream satisfy the strange tastes we’ve developed over two nightmarish years? Or will Americans watch this odd French film and think, quelle horreur?