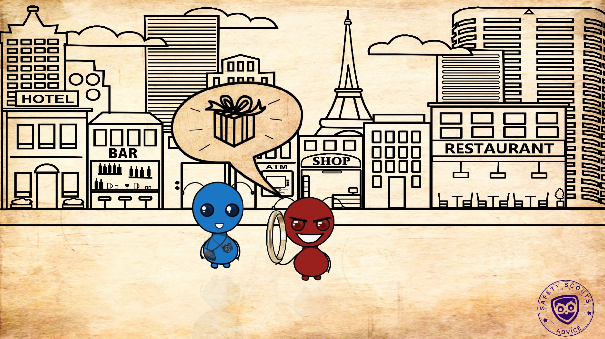 We’ve all heard them: the tales of friends returning from a vacation with one fewer cell phone or wallet. From pickpockets on the subway to petty theft at a sidewalk café, Paris often sounds like a tourist scam hotspot.

A YouTube series, Safety Scouts, explores the most commonly used tactics and how to stay safe in Paris and beyond. Created by former Paris police officer Christophe Gadenne, the series explains the scams, tells viewers what to avoid, and how to react if you’re the unfortunate victim.


French Morning caught up with Gadenne to get an insider view of why Safety Scouts is sure to become a must-watch before your next vacation, and pro tips on how to make it as peaceful as can be.

FM: In a few words, can you tell us about the idea behind Safety Scouts?

Gadenne: I started my police career in Paris, the number one city for tourism in the world. After seeing thousands come by the police station, victims of the same scams over and over again, I wanted to do my part to make it stop.

Security is a tricky subject, so I decided to bring it up with a more positive and ‘lighter’ tone: that’s how the idea for an animated series came about, with characters portrayed as cute little aliens.

My goal is pretty simple: share what I know from a police point of view so travelers can avoid scams. I’m optimistic and feel that we can really make these techniques disappear on the long term.

FM: In your former life as a police officer, did you feel frustrated and unable to solve the situation in Paris?

G: I’ve actually been a victim myself, as a tourist in other countries. I’m disgusted by how cowardly it is to attack the most vulnerable –in this case, travelers – and especially when I see them laugh as they’re arrested. They know the justice system doesn’t really punish violations dealing with tourists, and the red tape makes it hard for the police to do anything before it’s too late.

FM: Several of your videos deal with cities other than Paris. Today, does Paris seem more dangerous than others?

G: If you’re a well-informed visitor, Paris honestly isn’t a dangerous city. Sharing Paris police knowledge with tourists was also a way for me to help others enjoy the city peacefully, as much as I do. It worked! Colleagues from other European cities contacted me, asking for the same series on their own town, based on police and embassy information.

By doing this, I compared scams across the world: of course, in Paris it’s a serious matter, but no more or less than in other capitals. The issue is global.

FM: We hear a lot of people tell us that Paris isn’t getting any safer – in fact, they say it’s getting worse. What’s your take on that?

G: In a world-class city such as Paris, you have two types of people. Those who have never been assaulted or scammed, for whom the problem isn’t even there. Then you have the victims, who feel like everything is taking a turn for the worst… To be honest, the scam tactics we describe aren’t anything new—unfortunately!—and are very popular among thieves. Punishment for a scam is nowhere near the one for violent theft, and stealing from a tourist usually doesn’t lead to any harsh consequences for the perpetrators. No risk, all gain: that’s what the scammers see in it.

FM: What is your advice to visitors in Paris that may find themselves the targets of these scams? What can they do?

G: You have to learn to say “no”, strongly and firmly. If necessary, yell – it can solve the problem. If it’s too late and you find yourself victim of a scam, find a police officer and let him know, or call the police by dialing 17 or 112 in France.

This is really important: policemen patrolling in the neighborhood truly can find the perpetrators, even if some time has gone by. If someone stole your purse, walk around the area looking at garbage cans and hidden corners: even if valuables were stolen, you may still be able to find the bag.

Of course, immediately cancel all credit cards. Once you’ve done all that, go to the nearest police station to file a complaint.

I would also recommend that once you’re back home, find the Safety Scouts video that illustrates what happened to you, and tell us your story in the comments – when and where it happened. It’s the best way other viewers can realize that these scams happen more often than we think… and could happen to anyone.

FM: Safety Scouts was recently put in the spotlight by the European Union. In your opinion, are government authorities today doing enough to help visitors stay safe?

G: Most official bodies would rather say that everything is fine, or getting better, than being honest with the population simply because they’re afraid of scaring everyone… and becoming less attractive as a city or country. That’s where they are all wrong: nobody knows about the traps in advance, and that’s why they fall straight into them. It’s unfair, and it’s counterproductive. They go back home and tell their friends and family about the terrible experience they had abroad.

YouTube is a great way to spread the word and help visitors rediscover how pleasurable traveling can be. That’s why it was such a great step forward that the European Union showcased Safety Scouts.

FM: On a lighter note, tell us about the most bizarre scam tactic you’ve ever seen.

G: The “pickpocket hugger”, featured in Episode 6 of Safety Scouts, is by far the most odd. Thieves pretend to hug you…when in fact they’re picking your pockets. It’s such a bizarre technique that even I was surprised the first time I heard of it from victims at the station. There are even weirder variations on the same idea: they dance with you, show you some football tricks, or just latch onto your leg and shake it! It’s surprising and that’s why it works: visitors simply don’t know how to react.

FM: So what’s next for Safety Scouts?

G: I get a lot of questions from viewers, as well as some great advice on safety in cities. The next step is to create a platform and share all that knowledge and experience. I hope that in the long run, everyone realizes how important it is to treat visitors right: and now, I have a worldwide network of police officers to get that message across. As of today, our volunteers have translated our videos into Spanish, Russian, Chinese, German, Arabic, Hebrew, Korean, and Japanese – whew!