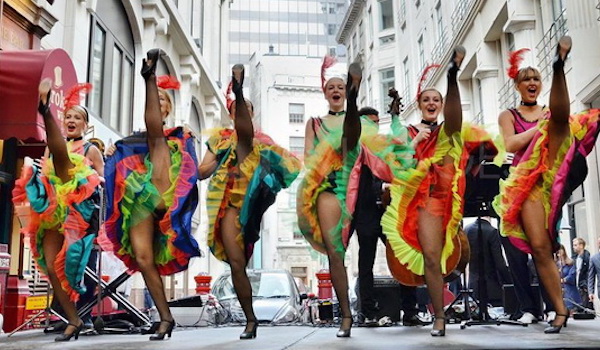 Bastille Day in Los Angeles has no shortage of festivities. In fact, some have been celebrating since the beginning of hte month and will continue until July 19th! You still have plenty of occasions to get your French culture on in the City of Angels at these fantastic events.

7. Le French Festival: 10 days of Franchophilia
From July 4th until the 14th, this new festival offers the discovery of French savoir-faire through 25 businesses: hair dressers, restaurants, bakeries, galleries, wine merchants… “instead of a classic day-long festival where everyone converges on the same spot,” says French Festival co-organizer Charlotte Petit-Noble, “the idea here is to encourage people to go out and discover the French business-owners in their stores.”
You can get a ticket that offers discounts and gifts as well as samples. It must be stamped upon each visit. Five stamps gets you free entry to the Bastille Day soirée organized by French Tuesdays.

6. French Tuesdays
This is the chicest Bastille Day soirée in Los Angeles at the Sofitel in Beverly Hills. There’s a cabaret show, pétanques, bien sûr, and DJs spinning. “We encourage people to dress in blue, white and red, but please no berets or baguettes!” says Gilles Amsallem, the brains behind French Tuesdays.
Tickets are $20-$30 and you can find them here. Entry is free if you’ve had your Le French Festival passport stamped five times. The soirée is on July 14th from 7pm until 1am at the Riviera Lounge Bar at the Beverly Hills Sofitel, 8555 Beverly Boulevard.

5. Pétanque under the trees
Calling all boules and pastis enthusiasts: Sunday July 12th there will be a traditional tournament in honor of Bastille Day organized by the Los Angeles Pétanque Club. Four games are scheduled by teams of three (the teams must be mixed). Medals and bottles of wine will be awarded to the winners. “You don’t have to be a club member to participate,” says Carol Marcus, “We’ll even be serving coffee and croissants!”
$15 per player, lunch included. Sunday, July 12th from 9am (sign ups here), Rancho Park Pétanque court, 2551 Motor Avenue.

4. French wine tasting
The Alliance Française of Los Angeles and Heritage Fine Wines will be organizing a tasting of Rhône and Burgundy wines. “From Chablis to Châteauneuf du Pape, we’re going to travel all along the route des vins — 500 kilometers,” says sommelier Jordane Andrieu, “We’ll taste different styles of Chardonnay, Pinot Noir, Syrah and other blends from organic and biodynamic wine producers.” It will all be accompanied by French cheese and Poilâne bread flown in straight from France.
Tuesday, July 14th at 6:30pm. Heritage Fine Wines, 9400 Santa Monica Boulevard, Beverly Hills.

2. A French lunch in Pasadena
To celebrate French refinement, the Alliance Française of Pasadena is organizing a “déjeuner en français” at the very chic Athenaeum on the Caltech campus. Albert Einstein was one of the first people to dine in this private club constructed in the Mediterranean style. Tuesday, July 14th, 551 South Hill Avenue, Pasadena.
For reservations, email: [email protected]

1. Santa Barbara French Festival
Whether you live in Santa Barbara or Los Angeles, the French Festival is a great excuse to get away for a weekend. “For this 27th edition we are expecting a lot of people,”says Nathan Quinney, one of the organizers,”This year the World Cup won’t have us in its shadow…” On the schedule are accordion concerts, chanson française, Polynesian dances, tastings of all kinds, and of course the traditional poodle parade. Entry is free. Saturday July 18th and Sunday July 19th Oak Park, 300 West Alamar Avenue, Santa Barbara.